Winner of the Golden Bear award at the Berlin Film Festival, ‘Synonyms (Synonymes)’ is about a fleeing Israeli trying to restart his life in Paris. Yoav (Tom Mercier), who is at the center of  Nadav Lapid’s proactively deranged third feature is a 20 something who wishes to shed his complete personal to take up a new life. After his promising second film ‘The Kindergarten Teacher (2014)’ – which also saw a intelligent American remake starring Maggie Gyllenhaal, Lapid dives into a chaotic character drama that is more autobiographical than it’s made out to be.

The film opens with a fantastic prologue to Yoav’s tale in the new city. He arrives at an empty apartment and almost instantly knows about his fate. His dreams of starting fresh are almost erased when he ends up naked in a bathtub on a freezing night. Thankfully he is saved by a posh couple upstairs who ironically provide him with a second life. The symbolism of losing oneself to become new is all the much too on the face here, but Lapid cleverly diverts our attention towards the couple that saved Yoav. Soon enough, Emile (Quentin Dolmaire) and Caroline (Louise Chevillotte) get acquainted (maybe too acquainted) with Yoav’s plight. They decide to help him out so that shedding his skin becomes easier.

The rest of the film has us following Yoav as he takes small steps to camouflage himself. The yellow-colored overcoat is a great symbolic indicator for donning a Paris-eque persona. However, it is the first step that gives Synonymps it’s titular rhythm. Yoav chooses to completely let go off his home-grown language and take up french as his only soul-mate. Every waking minute of his life is now spent on mugging up french words from the dictionary that he sniffs off a local store. The rest of the time we see him indulging in all possible tricks to surviving the big city. 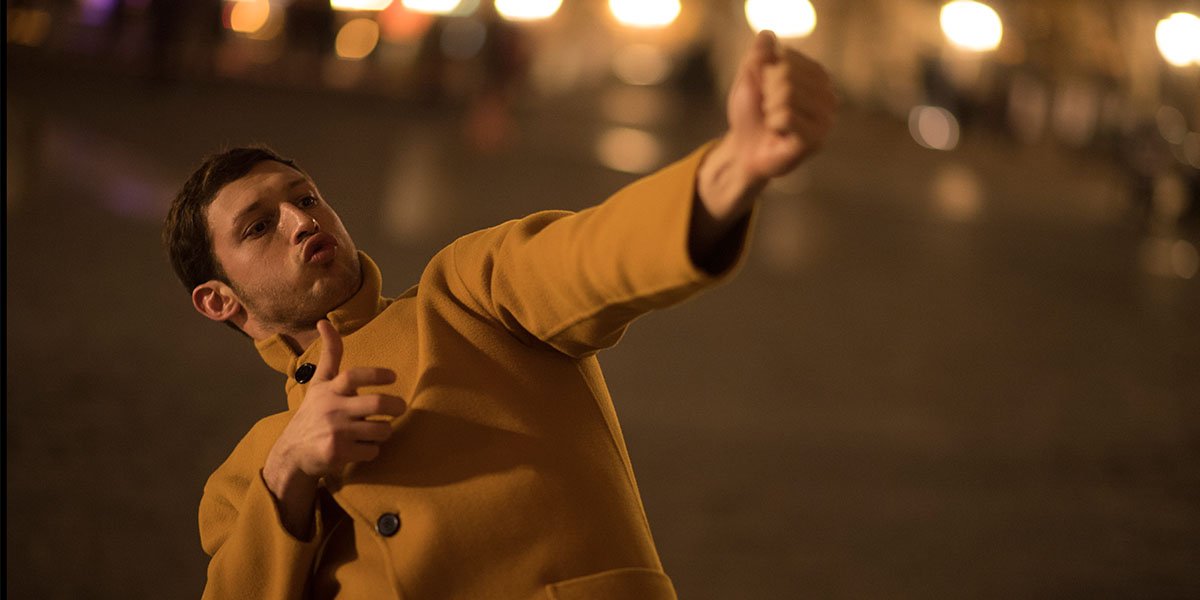 Lapid uses jump-cuts, hand-held cameras and some unexplained character motivations to excessively make his straight-forward narrative seem like a meandering mess. The references are pretty on the face. He creates a caustic environment for the protagonist, hearkening back to Jean Luc-Godard’s early films. And while Synonyms (Synonymes) embodies Godard’s spirit with vapid narrative choices and other audacious filmmaking techniques, there’s never enough indulgence in investigating the identity crises and it’s psychological impacts.

These strange choices bring Synonyms (Synonymes) in a literal ground of two fields. It is an impressive little film with an unimpressive way of examining things. It is maddeningly genius in parts and incredibly infuriating in others. While the film is devised as chapters in Yoav’s life, a lot of it feels contrived or insignificant. The film is basically about self-realization and heartbreak of being disappointed with the city of your dream. But with Lapid’s intense switches between tones, the realization is never felt.

Synonyms (Synonymes) is either too self-absorbed or too artificially designed to really articulate an emotional impact. Clocking at over 2 hours this tale of self-disillusionment and coming of age become aggressively tedious with every passing minute. Thanks to Tom Mercier’s fantastic performance – whose insanely good turn is the biggest takeaway, Synonyms does feature glimmers of greatness. There’s also a very acute, subtle look at displacement. Lapid who basis the entire arc against his personal experiences makes sure that we understand how hard it is to attain a new environment. He also makes sure that we know Yoav’s struggles even when we see him glossing around with the weird couple upstairs.

In the end, the film left me in complete splits. I found myself admiring it and cursing it at the same time. Not sure if that is what being an outsider in a place that would never feel like home feels like,  but there are ups and downs in Synonyms (Synonymes) that feel bloated and triggered and that’s not a good sign in my books.

Blinded by the Light Netflix [2019] Review: A Run-of-the-mill Drama about Finding Oneself

How Bacurau Creates a Political Narrative Through Archetypes and Self-Awareness