The idea of a coming-of-age story of a young Mohawk girl Tekehentahkhwa with a quirky nickname Beans, going through a period of personal growth due to extenuating circumstances like an armed stand-off sounds like a fantastic idea on paper. The execution here, due to a co-authored screenplay by director Tracey Deer and Executive Producer Meredith Vuchnich, is a mixture of an intimate emotional perspective of an indigenous young girl living through a turbulent time, and rote coming-of-age genre tropes. Fortunately, the coming of age genre tropes don’t overwhelm the narrative, and for the majority of the runtime, we see an almost autobiographical view of racial divide and violence. Furthermore, the fact that it doesn’t shift away from the perspective of the child is one of the stronger aspects of this film.

Civilization and progression are sometimes at odds with peaceful co-existence for reasons which on paper would sound extremely easy to solve, and thus baffling to figure out the reason for such a conflict. The 1990s Oka Crisis started because of the plans of the Oka town administration to expand the golf course in their town from 9 to 18 holes. Consequently, an ancient burial site, sacred to the adjacent Mohawk community needed to be leveled. To stop this encroachment on their territory, Mohawk residents organized a peaceful protest which escalated when the clash between the provincial police and the protestors led to a shootout causing the death of a police officer. Overnight a barricade was erected on the highway, which caused the Mohawk residents to barricade the Mercier Bridge, a popular commute used by thousands of Montreal residents. The Oka Crisis thus became the subject of racial controversy, nightly news, for 78 days.

Beans benefits immensely from a very talented director at the helm. Deer is extremely proficient at shooting emotionally charged scenes. For instance, rocks being thrown at Beans’ car while her mother drives away felt haunting and dreadful. The decision to shoot that scene from inside of the car at a low angle, corresponding to the eye-line of the teenager, intensifies the experience. Tracey utilizes her cinematographer Marie Davignon in creating long tracking shots, low-angle closed off shots, while also splicing in news footage of the actual Oka crisis. It lends authenticity and credence to the whole perspective, which is also what makes this movie immensely important – a coming-of-age story dealing with the perspective of a young girl who is not white. 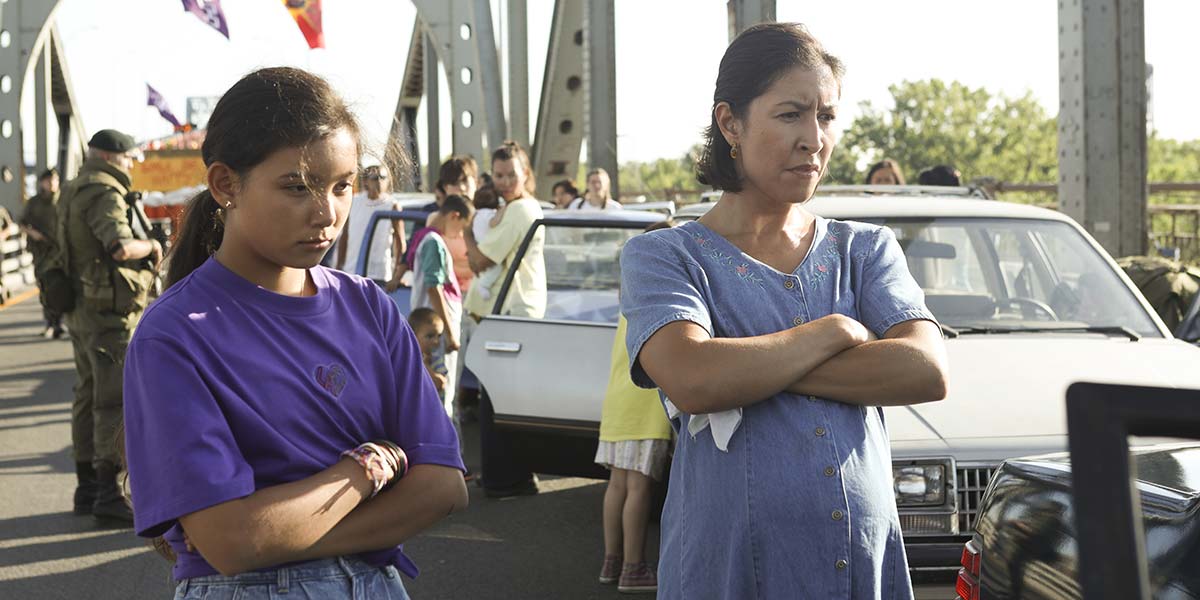 The movie also benefits from a very talented lead in Kiawentiio as Beans. She is mesmerizing in the main lead role and her performance anchors majority of the narrative. There is an inherent likeability in her which helps the audience to sympathize with her character. Her chemistry with Paulina Alexis’ April is also noteworthy. Alexis imbues enough nuance to the character that makes her stand-out from the traditional elder bully. The acting from the rest of the cast is decent, sometimes feeling a bit stiff. The focus on coming-of-age tropes like the young girl dressing up, getting into arguments with her family, is a tad bit tiring to go through, though the acting and the in-story reasoning for such a shift in her character makes it feel plausible.

Tracey Deer’s Beans’ thesis statement is best encapsulated by the opening scene in which she unsuccessfully tries to correct the pronunciation of her name during an interview. She finally gives up and tells the principal to call her Beans since that’s easier to pronounce. Presenting a subtle way to showcase racism, both covert and overt, the film completes Beans’ arc by the denouement in the final scene, which should be seen to be believed. In a brilliant bookend, Deer shows the coming-of-age narrative arc of Beans the character and her personal growth shining through in those final moments.