How Haneke plays with the audience expectations in ‘Funny Games’

There are three participants in Micheal Haneke’s disturbing satire on American home invasion movies. The family that is being held hostage, the intruders, and the audience themselves. Funny Games (1997) partakes these three entities, indulging us in sadistic, sickening turns. It uses the narrative of a typical slasher film set within the confines of a home and makes fun of the set expectations and clichés in the audience’s mind. In doing so, the games are played within and outside the reality of the film itself. Making the experience truly original.

Sans the occasional wink and fourth wall break, there’s no way a general audience can perceive this pervasive reworking of a typical ‘family-trapped-in-big-house-as-psychopaths-circle-around trope; to be something that can’t happen in real life. The reason why most home invasion movies manage to creep out the audiences is the fact that these scenarios can pretty much happen with anyone, anywhere.

This is the reason why Haneke wanted to turn his critical lens to the moral compass that these home invasion movies fail to comprehend. In trying to lure the audience into a scare-fest, they occasionally go on to normalize and glorify violence. While Haneke’s Funny Games (1997) also glorifies it, there’s no celebratory leap in the end. While most movies of the sub-genre end with one of the victims finding the courage to face the intruders, Haneke shows us the flip side of that situation.

The Opening sequence of Funny Games:

To really understand how the director plays with the audience’s expectations, let’s rewind to the very start of the film. A wealthy family of three – George, wife Anna, and son Georgie are in their car happily driving to their vacation home. A huge boat is seen hooked to the vehicle and the couple is playing a guessing game with each other. The two take turns to play a classical music piece on the car’s player as the other one guesses the artist. Their son is perched in the backseat accompanied by the family dog Rolfi.

The first time Haneke disrupts the proceedings is a warning about the dread right away. A heavy metal sequence plays over the soothing classical piece as if warning the audiences for the first time. To put it accurately, Haneke wants the audience to leave the film right away. The title of the film appears in big red letters, further amplifying the annotation of a wave of unnerving sequences waiting for you.  Now, don’t get me wrong. Of course, a filmmaker makes a film that you wish to see and they want you to see. However, Haneke is basically critiquing the fact that the perversion present in the mind of the audience can surpass that of the ones seen on screen. In a way, we want to see dreadful, sadistic things so that we can self-congratulate ourselves that our lives are better.

Haneke is more interested in a nihilistic sense of morality. His view of the world and the people in it comes from a standpoint that proves that people and their inhibitions can be often misleading. For instance, I as an audience was amused and not disturbed by the literal insertion of a disruption in the musical cue. It speaks a lot about how I perceive a film and any other piece of a cinematic oddity in general. In a way, the filmmaker is speaking directly to me. He is critiquing the way I plan to see fiction playing out in front of me. If I plan to leave at this point in time, it shows that I might not be the target audience and that I am affected by an unnerving gaze.

Subversion of the Home Invasion sub-genre:

Now there are a lot of instances where Funny Games subverts the Home invasion genre. I mean, it’s built that way. The structure in itself is truly ambiguous. However, since we are going in chronologically, let’s talk about the sequence after the title appears. The family is about to reach their vacation home when they witness that their neighbor is conversing with a couple of young boys. These will be the said intruders who thereby play sadistic games with the family. It’s exactly where the director subverts the very first trope. The idea of a surprise intrusion with masked people and their intentions is never put into context.

Haneke is readily perspiring not to trick you into believing that there is a sudden dreadful situation at hand. In a way, he is directly making fun of the sadistic American home invasion films that play with these horrific tropes to put you in a state of complete dismay. The invasion happens with conclusive results. This is because the director is eager to warn the audience at every given instance. 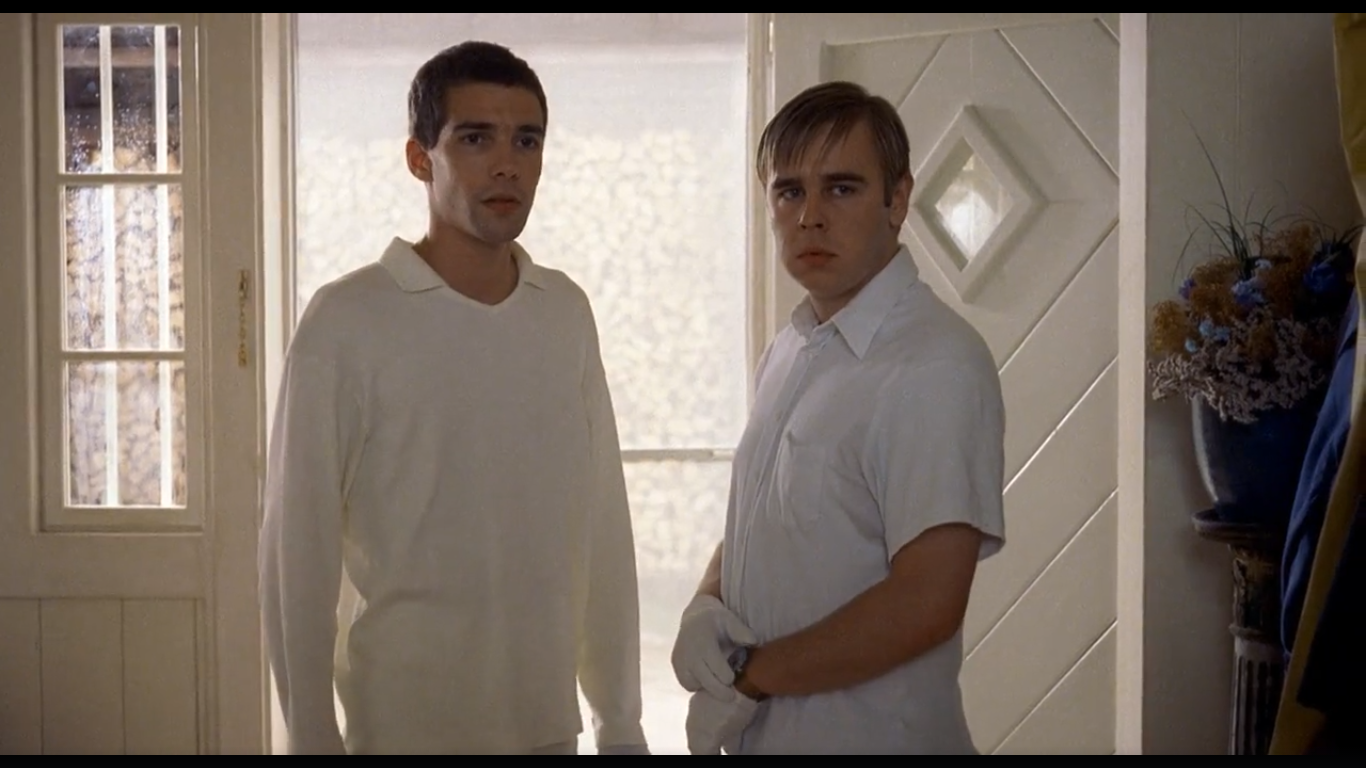 Next up. When  Peter and Paul start imposing themselves on the family, their low-key stupid antiques don’t seem threatening enough. While Paul seems like a skinny young man who Georg – the head of the family could easily wrestle out, Peter seems oblivious and clumsy. However, Peter’s clumsiness only results in the family’s loss of connection to the real world. The borrowed eggs break and the family’s phone gets destroyed – supposedly by accident.

The subversion here is pretty low-brow since the two invaders never seem like people who can actually hold someone hostage. However, they eventually do because of their brittle force and shock value.

Unlike most films that break the fourth wall to reveal themselves as a metaphorical look at the human condition, Haneke’s Funny Games takes its own sweet time before revealing its meta-narrative. This is an interesting way to look at how exactly does the director play with the audience expectation.

Most cine enthusiasts who are actually aware of meta cinema and how it is used as a tool to directly communicate with the audience – i.e bridging the gap between the screen and the conscience will see how Haneke uses it as another trigger to shock you. Here, he doesn’t communicate how the victims will eventually fall prey to the invaders, but he plays with your mind.

Only Paul (Arno Frisch) breaks the fourth wall. This means all other characters work as victims and proprietors. The first time the fourth wall is broken, Paul slyly winks at the camera. This sequence features the family’s much-adored dog ‘Rolfi’ being denounced dead. 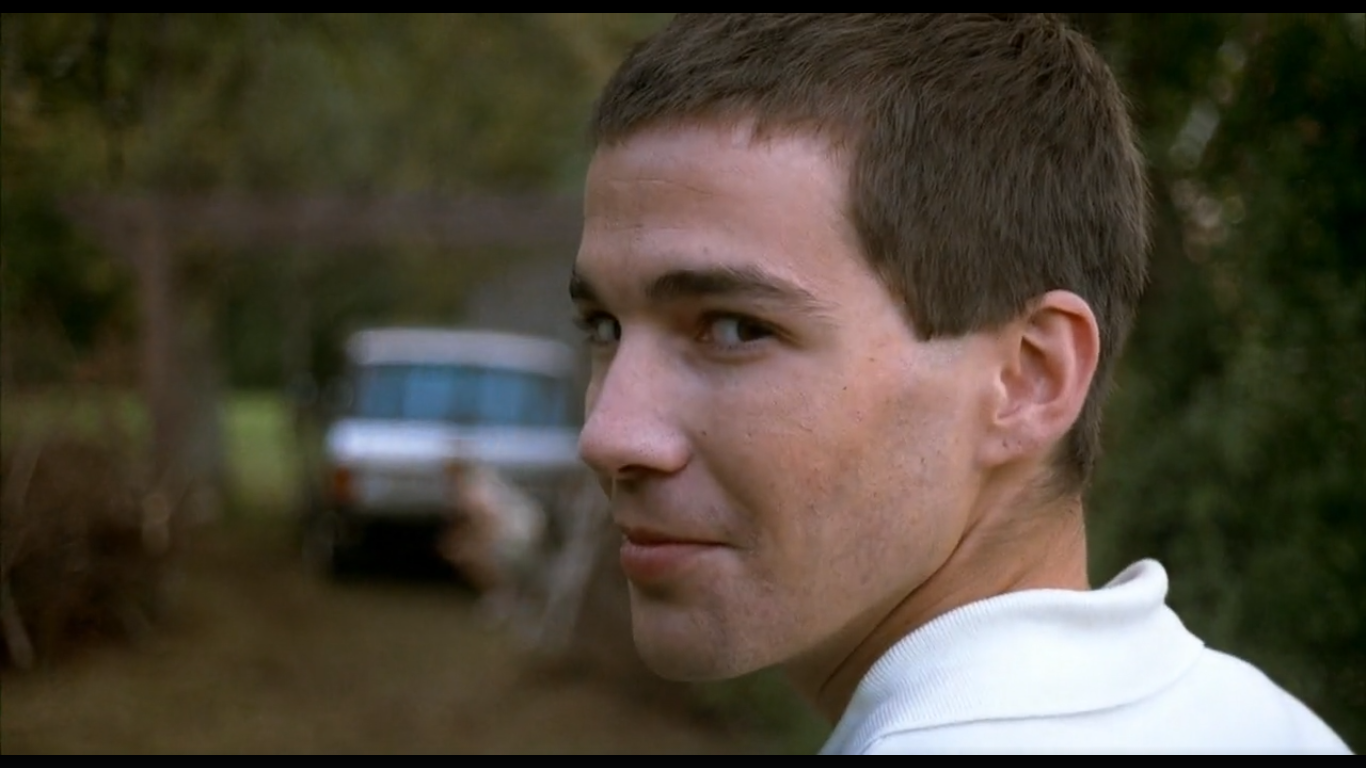 Now, when it comes to violence against animals, most home-invasion American counterparts either use them as a way for victim redemption or show them escaping the treacherous act. Some also show their eventual fall off-screen. Which only means that these directors fake-sympathize with you for the sake of the redemptive arc that is coming towards the end.

So, when Haneke’s character winks at you, it implies that the audience should leave, and if they manage to stay; it shows that their fake sympathy is actually pretty real. These meta intrusions actually uncover our hypocritical feelings of actually enjoying sadistic acts of violence. So much so that we are even going to allow animal violence by normalizing it because it works within the realm of the film itself.

Turning the conflict over its head:

The usual conflict in home invasion movies arrives when, (a) one of the victims manages to flee or (b) when the invaders have some kind of personal vendetta within themselves; resulting in losing a grip on their victims. In Haneke’s Funny Games both those plausible notions are presented to uncover a more macabre motive.

For instance, after Peter and Paul subject the family to sadistic situations, Georgie manages to feel to a nearby house. This is the exact narrative strand that serves as a kind of role-reversal in such films. The one who manages to flee will eventually turn the hostage situation over the head and it will be the invaders who will have to suffer thereafter. 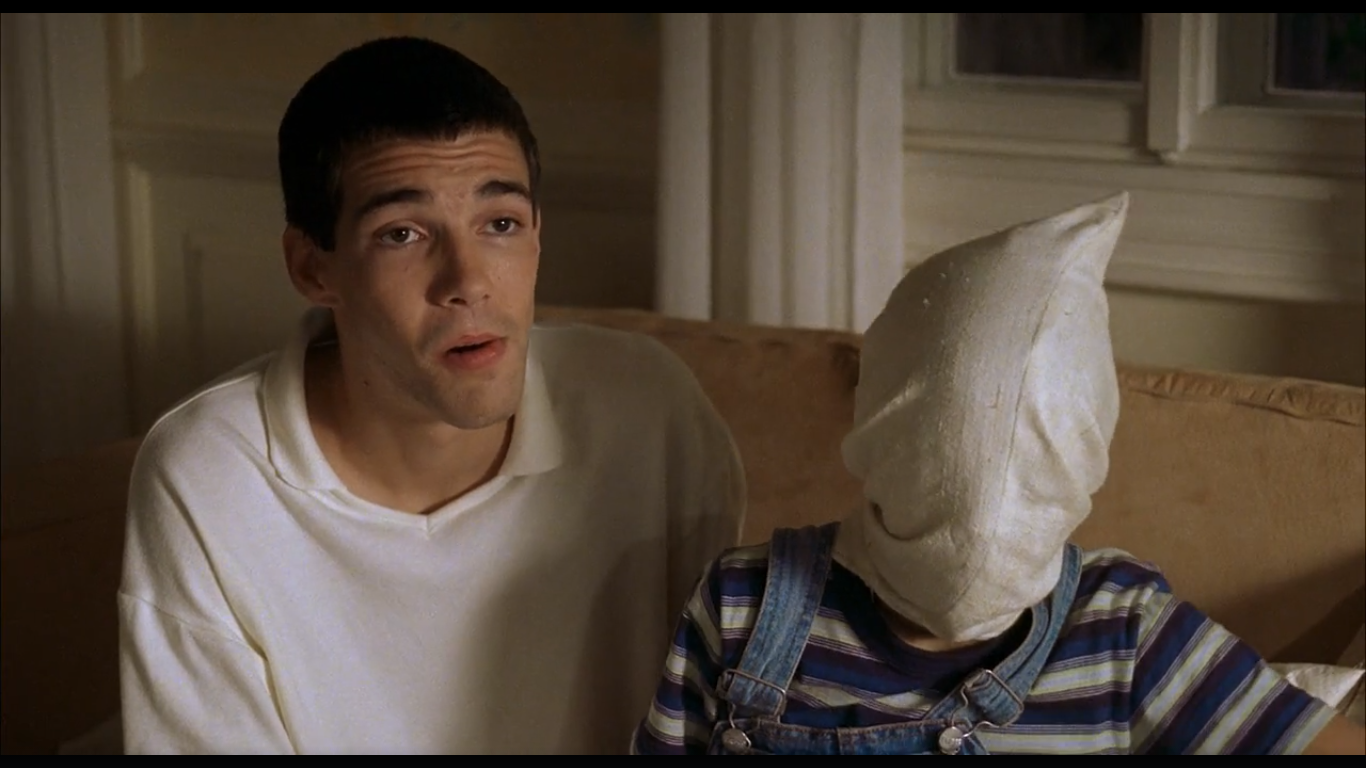 This cliche is more manipulative than most of the emotionally moving melodramas out there. I mean, the filmmakers are literally subjecting you to sadistic acts so as to declare you the winner in the end. In reality, these kinds of situations would never turn up the way they actually do in films.

Haneke is playing on that clue. While Georgie manages to flee, he is soon captured and is brutally murdered. While this may seem like an extreme step taken from the director, it goes to prove that not all things end on a happy note. That things, don’t fix themselves, and evil can actually win over the good.

More so, he slaps the audience on the face when the captives overpower the invaders. In a sly throwback to his own film Benny’s Video (1992), Haneke rewinds the reality of the film and resets the game in favor of the invaders.

Letting the Chekov’s Gun slip away:

To understand what Chekov’s Gun actually stands for in the terms of its cinematic retention, you must look at what the renowned author says about a rifle hanging on the wall in the first chapter of a book. To reiterate it, let’s look at a very common example. Remember the Rita Hayworth poster in The Shawshank Redemption? The one that was given to Andy by Ray and seemed like a nice little gesture in the first half of the film? We all know how significant that poster actually became when the redemption finally happened.

Coming back, home invasion movies are full of such Chekov’s Gun. We are introduced to a certain element that eventually becomes instrumental in how things turn around for the victims. Similar to this, Haneke’s Chekov’s Gun is actually a knife in Funny Games. In the first third of the film, we see Georg fixing his boat up on the dock. He unintentionally drops one of his knives in the boat itself. 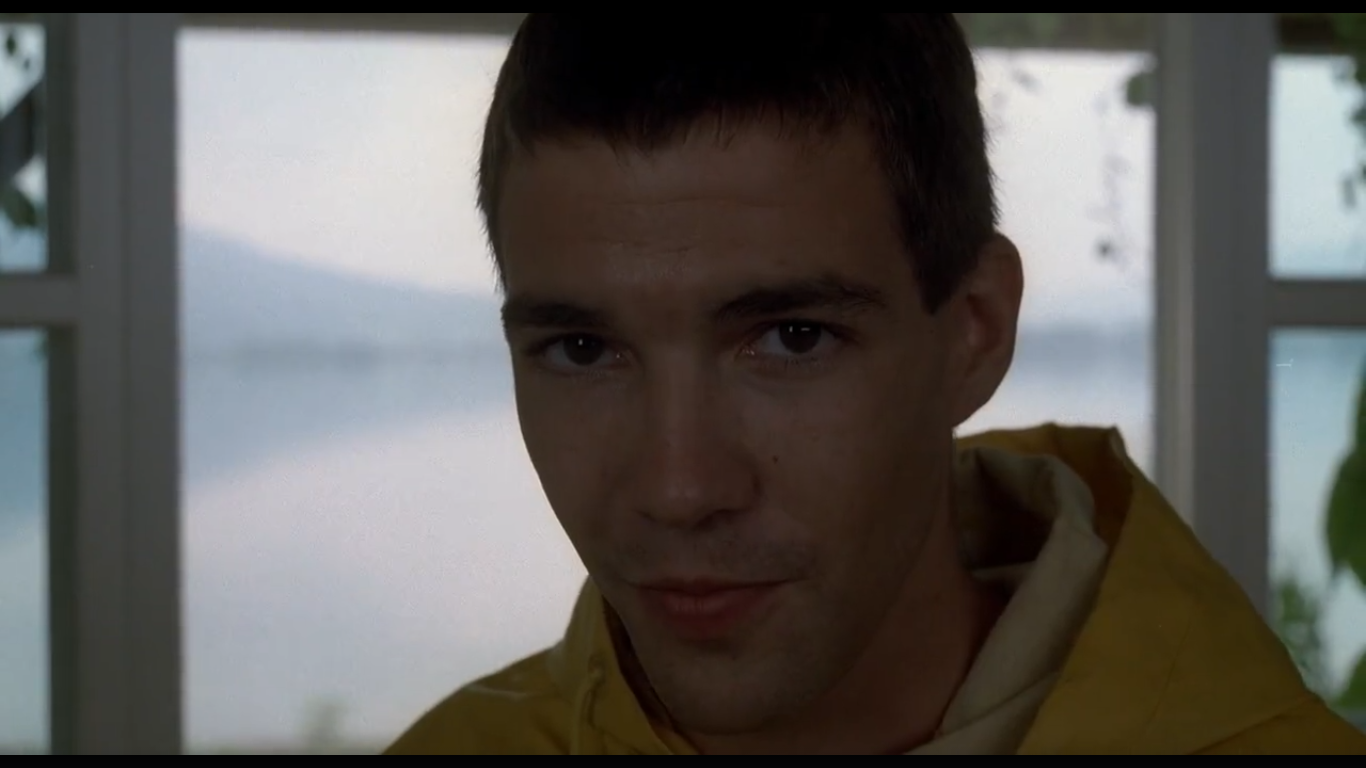 Now, Haneke makes sure that he focuses on this knife being casually dropped in the boat for when Paul and Peter take Anna for a ride in the same boat in the third act of the film the Chekov’s Gun reappears but does not serve its purpose in its traditional sense. That is, Anna is not able to use the knife to flee herself from the clutches of the captures.

Thus, there is no happy ending here. In fact, the invaders reset the narrative in a complete circle where we see them selecting another house that was cleverly foreshadowed to us by the director somewhere in the film itself. When the film ends with Paul breaking the fourth wall gleefully smiling at the camera, it just spats at the audience and their sadistic intuitions.

Funny Games is not only the cleverest genre film that I have seen in a while but also one that questions the very fabric of humane tendencies and to what extent can it actually digest violence. Haneke’s film becomes more relevant because we, the contemporary society that consumes murders and death on a regular basis over social media and other channels, are now actually stripped away of most of the things that we feel. It only goes to show how art can mean different things at different stages of life.

How Haneke plays with the audience expectations in ‘Funny Games’