Minimalist French-filmmaker Robert Bresson’s 1959 feature Pickpocket is a prime example of exhibiting small things with exhilarating effect. The protagonist Michel is never imposed as a lonely person. In fact, we see him often trying to get out of situations where fear and excitement are at extremes. Bresson wishes to convey his character’s motivation through acts of quick decisions. He places him in either quick-cut sequences of theft or in his apartment. The marriage of a person to his art can often be sighted as the real pull for the film. However, if you look at it closely it’s really about a  lonely person who hasn’t tasted or doesn’t forcibly look for the power of love and affection.

Most non-theft related sequences showcase him as desolated and alone – The voiceovers are preferred over normal conversation and his act of avoiding confrontations confirms the same. More so, he tries as hard as he can to not visit his mother. One of those times he chances upon his mother’s neighbor cum caretaker Jeanne. It’s evident that Michel is trying to avoid contact with anyone. His friend whom he meets occasionally at the local restaurant is also just an acquaintance whom he talks to for escaping his own thoughts. Picking pockets is his way to escape those demons in his head.

Theft is an act of great precision for him. The whole process of trying to figure out his next move is like a dance piece. The way he approaches a person, the way his fear and excitement never get the better off him, the way he rushes out of the tramp in the same subtle way of facing towards it before dropping his weight out of it – Everything is intricated and aimed as a trance. Even the few interactions that Michel has with Jeanne, there’s always a sense of urgency in his ways to do things. He mostly cops out from talking to her – Fearing that caring for another person will only change and hamper his concentration.

Bresson’s Pickpocket never questions and explains Michel’s motivations. No lookout or backstory is put into the narrative that explains Michel’s drive. It is pretty much a direct representation of the act of thievery. Which is why when the finale arrives it takes a few seconds to really understand the impact that loves an affection might have on such a person. If you look at it with Michel’s perspective, it might just seem like another instant act of acceptance. But since Bresson lays the foreground of Michel and Jesse having minute interactions we understand that the central theme of Pickpocket comes to the how love can save a person. How it can act as a trigger for redemption. 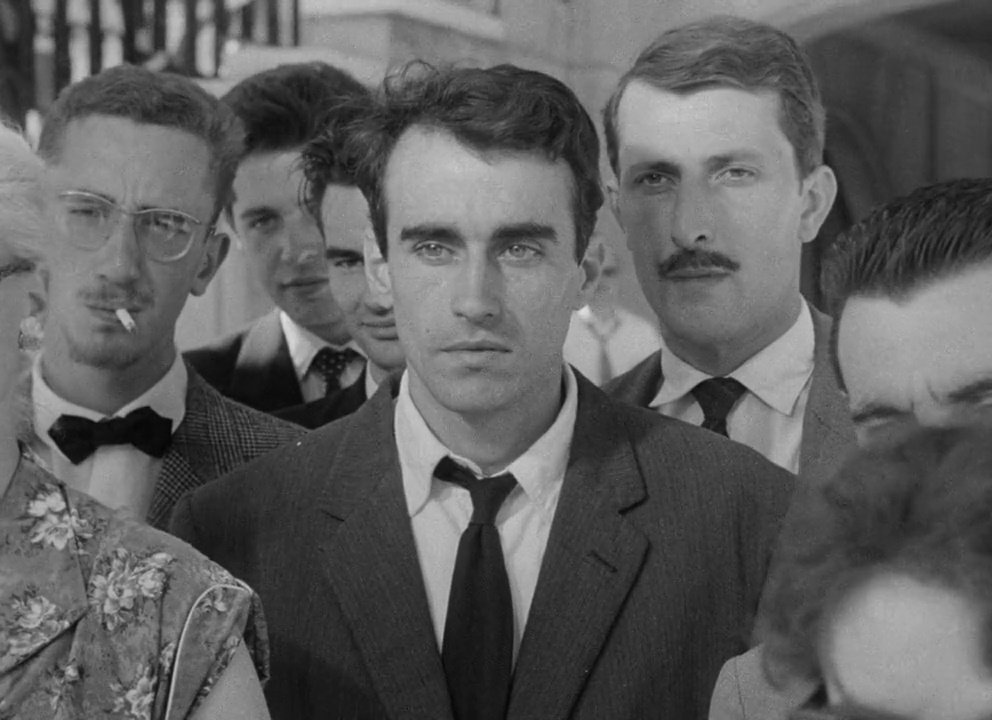 Bresson uses the idea of cutting off the usual acts of pickpocketing to Michel’s room without constructing them into a proper sequence. Which is why the viewer approaches the material in a very strange manner. He gives priority to the acts that Michel commits – Be it going into his apartment and finding if the hidden savings are lost, or just trying really hard to simmer down his anxiety when some part of his identity is out in the open. Bresson has been know to cast non-actors who show the least bit of emotional responses. By doing so the director constructs a two-way view into Michel’s life. We see his acts and his room as the only two essential beings or characters in the story.

Based on Dostoyevsky’s Crimes and Punishment, Pickpocket nudges the basic of the story to show a kind of transformation in Michel’s life that is completely accounted through his hands. When we see the acts that he commits most of the focus has always been put to his hands. When not, the focus is left to Michel’s face that is mostly frenzied with a kind of stillness that doesn’t show any sign of life. The film channels’ Michel’s life in kind of narcissism that has been induced in him by himself. The reason why he doesn’t get a job is not that he is not good enough to get one but that he has constructed a personality for himself where it would be too low to get one.

Another important aspect of Bresson’s narrative arc is the policeman played by Jean Pelegri. He is not put into the story to serves one side of a cat and mouse game. In fact, he strangely knows the Michel has been picking pockets for some time and wants to get caught. Hence, he only serves one purpose, i.e leading our main character into this docile state where he realizes what is important for him. Breaking the image that he had previously imagined for himself and finally grow a little into someone he needs to construct with his heart now.

Pickpocket is a film that puts the characters directly into a frame of judgment and asks the viewer if they would really try to understand the character’s side of the story. What makes it a great film upon revisit is its audacity to show and tell and investigate your moral judgments in the same frame. The tension and passion that seems to be buried deep into the character can be seen in small acts where he is trying really hard to mend himself but simply can’t because of a pre-imagined image of themselves. The redemption hence feels oblique in spite of a straight forward and direct approach. This showcases the exact genius that Bresson really is.