Home»Essays»Nightcrawler (2014): The Unveiling of ‘Behind the Scene Deception of the Media
Essays

Nightcrawler (2014): The Unveiling of ‘Behind the Scene Deception of the Media: Media is one of the key proponents in our daily lives that allows us to communicate with the outside world. Whether it’s print (newspapers, magazines), screen (TV news, movies), aural (radio), or various forms of social media nowadays, all are being used in daily life to get connected to the world. But why is this connection established in the first place? It is because all of these mediums claim to portray the actual truth to us.

As we live in a postmodern society, it is a dubious claim, in my opinion. The idea of postmodernity is the rejection of a grand narrative, and the truth is based on subjectivity so that anything can be the truth. On that basis, the question arises about the reality these mediums claim to show. As we interact with these mediums through their perspectives firsthand and then mold our interpretations of the subject matter, it is crucial to understand that these mediums can decide our course of elucidation.

Dan Gilroy’s 2014 film Nightcrawler is such a film that it makes us question how far today’s media are transforming the world as opposed to merely telling the actual truth or observing it. The film stars Jake Gyllenhaal as Lou Bloom, a manipulative, opportunist sociopath who roams around the city of Los Angeles only to find the opportunity of capturing any reported crime on the streets. He shoots the crimes and sells the video to the local news network KWLA 6. In this process, he encounters several serious crimes, from carjacking to murder, in his nocturnal adventures. After a successful bargain for a video clip of a carjacking, Nina (Rene Russo), the morning news anchor on KWLA 6, instigates Lou to get these crimes’ graphic imagery which attracts many viewers. As the instruction, Lou fascinatingly follows Nina’s advice and goes on nocturnal adventures to get a good amount of graphic footage of the crime scenes.

But here comes the core conflict of the movie comes. In this process of capturing Lou’s crime scenes and broadcasting them on television by the KWLA 6 news network, the actuality of the subject matter diminishes and forms a new kind of hyperreality. First, Lou, as we can see, constantly manipulates the crime scenes by breaking into them or tampering with the pieces of evidence. And secondly, the news network makes the subject matter entertaining and dramatic to appeal to the viewers by using various techniques of distortion (i.e., editing the footage or using eerie background music). However, they don’t compromise to make the footage appear as accurate as it is. Thus, as a whole, the news in the contemporary world becomes a creative product, not merely a reflection of reality. 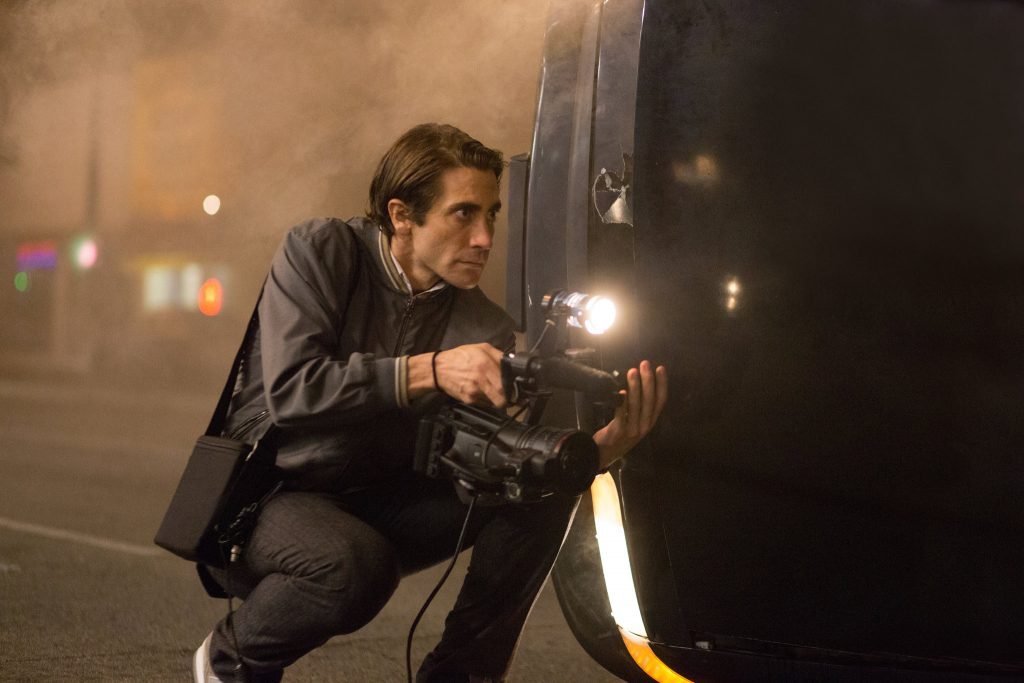 Nightcrawler encapsulates this sheer hypocrisy of the media in contemporary society with a dark character study of the protagonist Lou Bloom. An opportunist, self-obsessed sociopath, Lou is manipulative and can do anything to achieve his goals. He is a transient receptor and highly intelligent to absorb into the surrounding. For this trait, the idea of being a stringer in the first place sticks in his mind when he sees some stringers capturing an accident one day. Also, he doesn’t take time to understand that the violent nature of the footage appeals to the audience more.

As I mentioned, the news becomes a creative product; One can define Lou as an artist who understands how to make the product attractive that the audience cannot help but delve into. He understands the creative force behind capturing any footage. In one dialogue, he states, “I am focusing on framing. A proper frame not only draws an eye into a picture but keeps it there longer.” Also, his constant use of the words like ‘wide shot,’ ‘zoom in,’ or ‘slow pan’ shows his conscious decisions to make the product more substantial.

I think Gilroy designs Lou Bloom as an imitation of a movie director. And with that, he incorporates subtle critiques about the limitations of the film itself in the movie. When discussing media, the film is the most popular medium among the masses. Like any other media, it claims to portray the truth. But it has the power of deception to subvert the actuality of the supposed truth. Jean-Luc Godard funnily said once, “Cinema is the most beautiful fraud in the world.” It can take inspiration from the truth, but there is a difference between actual and cinematic truth.

So in Nightcrawler, it’s like an unveiling behind the scenes of making a movie. Film as a voyeuristic medium intrudes on people’s lives; similarly, we see Lou breaking into houses to capture footage for sale. The film also deals with the marketing part of the business as it shows when the news is airing how the graphics should be incorporated or when the background music should go in. But these deception methods are so precise that we can’t help but be intrigued. And even knowing the deceptions, we can’t manifest them. It reflects in the last conversation of the film between Lou and a detective. In that, the detective tells Lou that she does not believe him for a second, and Lou replies that he is glad to hear that. Like any good artist, he knows no one can prove his deceptions.

Nightcrawler is a crucial movie that shows the dark realities of the media and, at the same time, provokes us to question its reliability. It is pretty ironic that to talk about this, Gilroy uses the film medium, which has its deception strategies similar to that of media. But the subtle critique about it gives the film an entire arc of achieving its core message.