Your Christmas Or Mine (2022): After coming across a few Christmas movie titles in the recent past, I have realized a formula that most of these projects follow. The stories or such movies often revolve around members of a family getting together after a period of emotional distance, where the spirit of togetherness is often celebrated. A certain ‘magical’ element often comes into play here, which reinstates the characters’ belief in the event, which is the Christmas celebration.

The same warm and cozy feeling from every other Christmas-themed movie is also captured in the new romantic comedy film – ‘Your Christmas or Mine,’ streaming on Prime Video. Starring Asa Butterfield and Cora Kirk in the lead roles, it captures the same journey of hope from despair in a delightful manner. 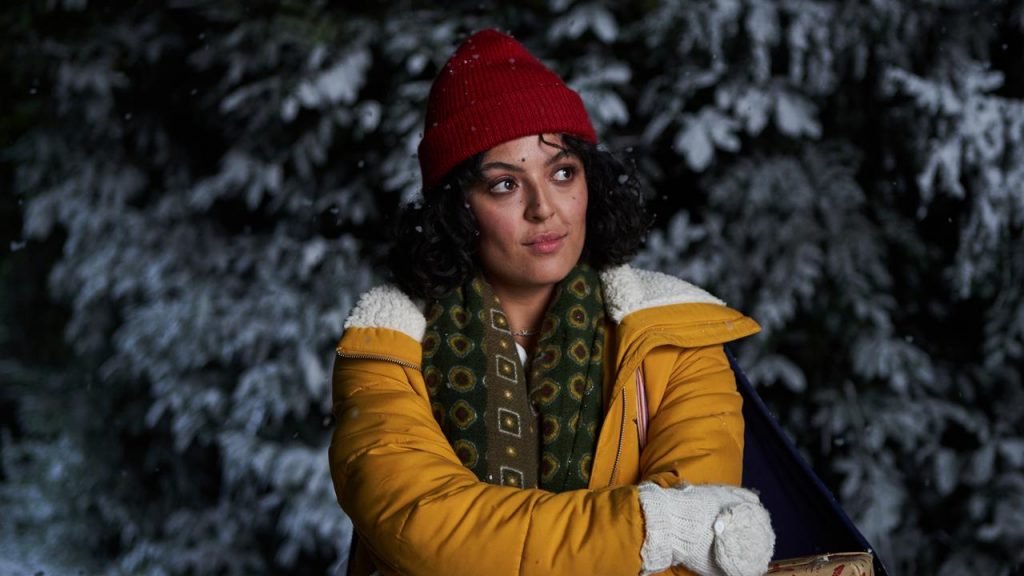 Hayley (Cora Kirk) and James (Asa Butterfield) are two young students who are madly in love with each other. While having spent only a few months together, they consider each other their close companions. Their love resembles the same naivety that any other teenage lover does. Yet, it is sweet, goofy, and adorable in just the right proportions. They part ways on this special time of the year and decide to head to their respective family homes. However, both of them suddenly decide to switch their plans and go to their lover’s place to surprise them.

All of it happens without the other person’s knowledge. It has just the same ‘oh look how silly I am to have messed up this thing’ feeling that such romantic films capitalize on. Nevertheless, the pleasant execution and the performances of both these competent actors make you root for these characters to find their way. They lose their bearings after knowing certain details about each other that they were unaware of. James belongs to a royal family, which he had not disclosed to her until then. He had not shared of leaving the school assigned by him to join an art school, which is an unorthodox choice for their royal family.

Unlike James’ wealthy household, Hayley comes from a humble background in a working-class family. She had not shared any detail about their relationship with her family. When she goes to James’ house, his grumpy father treats Hayley in a mean manner, whereas her family meets him with a warm welcome. The class difference comes into play in their interactions with each other’s families.

The way both families chose to celebrate this festival and what it means to them has different definitions. While these differences are played out in a playful manner, the script also reveals some parts from their respective pasts that shape the way they think of each other for the time being. James learns that Hayley had a fiancée named Steve in the past, and Hayley learns how the painful loss of James’ mother caused his father to lose the sense of joy in his life.

With such elements in the ripe stage ready for fruition, ‘Your Christmas or Mine’ weaves genre tropes in a manner that manages to capture your attention despite their familiarity. The reason is the aforementioned magical quality that the director Jim O’Hanlon manages to bring this delightful concoction to the screen. The screenplay by Tom Parry takes a rudimentary, clichéd route that shines due to adding a few layers to its narrative besides writing its idiosyncratic characters.

The matter of not having a choice for a person from the royal family as opposed to the ones who have the option to choose, but not the generational wealth to enjoy the fruits of luxury, is brought to the table in a lighthearted manner. The title of the film itself highlights such differences in their living conditions. The film inspects what joy and celebration mean to either of them according to the same.

The film is certainly not a deep dive into class differences, and neither should it be. The film is still a warm, cuddly family drama that starts off as a romantic comedy and ends up being an affectionate tale of the value of compassion. Of course, the narrative is highly predictable. However, that does not take away the credit for its acting performances who make you fall in love with the candy-flossed nature of such movies.

12 Essential Christmas Movies To Watch During The Holiday Season

Your Christmas or Mine (2022) Movie Trailer

Your Christmas or Mine (2022) Movie Links: IMDb,  Wikipedia

6 Films to Watch if you like Slumberland on Netflix

Which Slingo Game is Best?