Adaptive Fidelity And Silence Of The Lambs: When it comes to movie adaptations, movie critics and audiences who ‘have read the books’ always put the adaptive work under the thralls of the source text. Adaptation cinema, before anything else, is predominantly subjected to review with the presumption of it carrying the heart and soul of the source text and expected to be a visual repetition of the text that is somehow supposed to evoke the same interpretations for the viewers as the text did.

“The book was better than the movie.”

According to Robert Stam, a renowned American film theorist, this need for the adaptation to be  “faithful” to its source comes from the feeling where one does not want the film adaptation to fail to capture what, according to them, is a fundamental aspect of narration, theme or aesthetic feature of the literary source.

So why don’t adaptations stay true to the source?

Because of the contextual differences that influence the creation and/or adaptation process in any art form. An adaptation, despite engaging with the same source material has to deal with an entirely different context from that of its literary source, not to mention the fact that the adaptive output is in an entirely different medium. This leads to minor or even major differences, affecting the way in which one perceives and interprets the text and its cinematic adaptation.

See More – The Silence of the Lambs [1991]: The Voluptuous Death

Let us look at The Silence of the Lambs (1991). Directed by Jonathan Demme, it is a highly acclaimed movie adaptation that shares the same name as its literary counterpart which was written in 1988 by Thomas Harris. Only the third film to win Academy Awards in all of the ‘top five’ categories (i.e. Best Picture, Best Actor, Best Actress, Best Director, and Adapted Screenplay), it is about Clarice Starling, an FBI trainee who is selected by FBI Chief Jack Crawford to interview the notorious psychopath and cannibal Dr. Hannibal Lecter in order to get some leads on Buffalo Bill (Jame Gumb), a dangerous serial killer on the loose. Although this 1991 Oscar-winning adaptation has been praised for the way it remained “faithful” to the novel, for someone who has read the novel and seen the movie, there are evident differences that change the interpretations considerably.

Where the book has the liberty to present to us the inner thought process of every character involved, the movie adaptation attempts to translate these internal thoughts of characters into facial expressions on screen due to the temporal constraints of cinema. 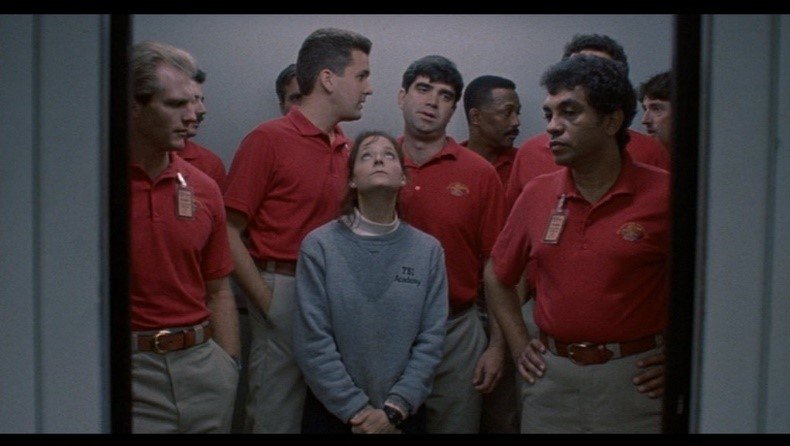 The ‘translation’ of inner thought processes into visual on-screen facial expressions from the characters serves to maintain suspense by not giving everything away about the characters but also opens up the possibility of the viewers who have not read the book to misinterpret Clarice’s expressions as one of fear and submission, rather than the outright frustration and anger she feels towards the males around her in the patriarchal dominated world. However, the movie makes a remarkable effort to depict her frustration and struggles through the cinematics of the ‘male gaze’.

Speaking of Clarice’s struggles’, we see her past only through occasional flashbacks and the movie does not present Clarice as someone who has a lot to lose when she works on Buffalo Bill’s case, unlike in the novel where Clarice has to decide between giving her FBI examinations or work on the case. This results in varying character arcs between the cinematic adaptation and the novel.  The absence of backstories also presents Crawford as a stern, distant man in the movie, for in the novel his backstory involves a sickly wife and so his physical description befits his sympathetic situation. Despite the claims of this film being ‘faithful’ to the novel, there still are differences between both. So, is ‘faithfulness to the source’ really the sole apparatus to measure the worth of an adaptation? This brilliant work of cinematic adaptation serves to show that rather than just focusing on what is ‘lost’ in the translation during adaptation, one must also look at what ‘new’ is gained.

Related to The Silence of the Lambs – THE STATE OF MODERN COMEDIES – SOLUTION I: EVERYTHING IS TERRIBLE!- PLAYING UPON EXPECTATIONS