Mise-en-scène in Brokeback Mountain (2005): A visual in a film is a combination of several elements that include setting, actors, lighting, décor, props, costume et al. These elements together form mise-en-scene. Mise-en-scene can also be described as all objects that are visible in a frame. The director along with the set designers, director of photography, assistant director(s), costume designers, actors, art directors, and other members of the team decide the intent of the scene and the emotions to be conveyed on screen.

James Monaco in his essay “The Language of Film: Signs and Syntax”, comments, “The codes of mise-en-scene are the tools with which the filmmaker alters and modifies our reading of the shot.” (Monaco 179) The right choice and combination of these codes and components create an enhanced effect on the viewers.

The setting of a scene refers to the physical location where the scene is being shot. It is necessary to have a proper location to emphasize the correct emotion, mood of the characters, the intensity of the scene, the significance of location as a private or a public space. In Brokeback Mountain (2005), the Brokeback Mountain is one of the most significant locations, a private space for Ennis and Jack where they need not hide their queer identity. The Mountain develops into a safe space for these men struggling with their sexuality, otherwise stuck in domains of heterosexual familial relationships, in a public sphere, in ranches and farm life of Wyoming and Texas.

It is Foucault’s heterotopia — space for both torture and overwhelming joy. Brokeback Mountain’s mountain setting is crucial both as a physical site and as the marker it becomes for the cowboys. “A signiﬁer of their transformative experience and high hopes, the peak becomes the touchstone of their life and both a fond and ﬁnally haunting memory,” (25) writes Jim Keats in his essay “All that Brokeback Allows.”

These mountains belong to the forest service and are regularly visited by their employer Joe Aguirre who on one of his visit peeps in when Jack and Ennis are sharing an intimate moment. This scene is similar to the one where Alma sees Jack and Ennis kissing. Another similarity in these scenes on a technical part is that while Joe witnesses their intimacy, he is on a higher part of the mountain than them like Alma who witnesses them kissing from her doorstep while both of them are downstairs.

This Foucauldian gaze that decenters socio-political power structures is fundamentally demeaning, much like Mulvey’s idea of the male gaze, and can be interpreted as how the heterosexual society looks down upon individuals from the queer community. 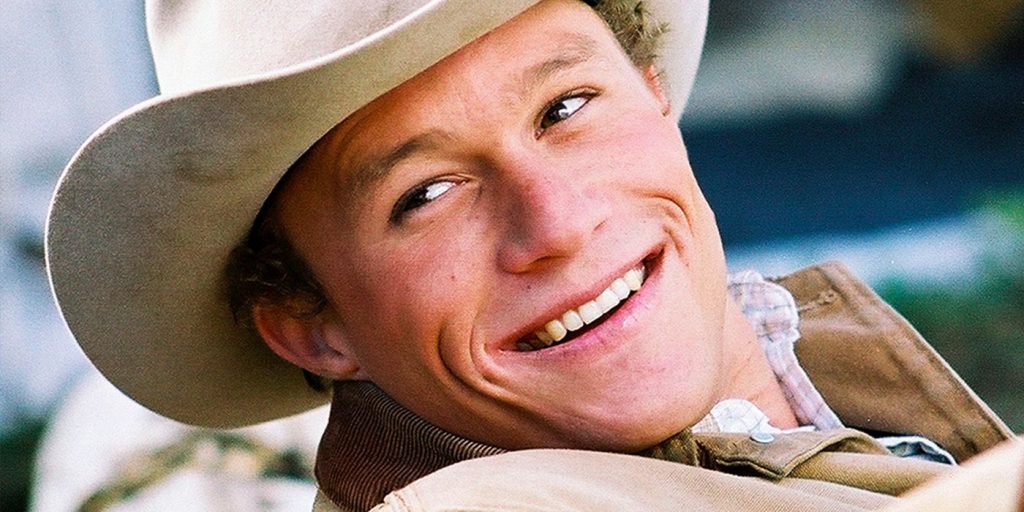 Lighting is a major element in the film that evokes emotions. While the high-key lighting is used to depict happiness through bright shots and no shadows or tincture of darkness, low-key lighting represents sadness, distress, mystery. Low-key lighting has both bright and dark use to create a contrast. The chiaroscuro (Italian: bright-dark) technique, long used by painters, is characterized by strong contrast, often employed to unnerve the audience.

In Brokeback Mountain, the lighting throughout the film is a low-key one representing the sad overtones that the film is trying to point at. One of the most discussed scenes of the film, where Jack leaves for Texas and Ennis is walking in the road, Ennis psychosomatically feels a pain in his gut, and punches the wall because he already knows that his life will now never be the same. The shot has been taken from the dark side from where only a silhouette of Ennis is visible.

The dark lighting emphasizes the sadness that grips Ennis when Jack leaves. It is interesting to note how the shot has been taken from the dark side, not only indicating the distressed emotions but also the homophilic nature of the camera, capturing the shot from the dark homosexual world of Ennis rather than the bright heterosexual world on the side that is looking down on Ennis as in Figure above.

Costume and Make-up plays an integral role in establishing the setting of the film and the characters. It helps one understand the economic stature and culture that these characters belong to. Brokeback Mountain is situated in farmland and ranches of Wyoming. These “cowboys” are often shown wearing hats typical of people living in Western Farmlands. Jack’s father-in-law, being a successful businessman, is often shown wearing a blazer, symbolic of his high economic stature in the society.

While Lureen dons accessories symbolic of her social status, Alma is shown without them when she is with Ennis. It is only after her marriage with the grocery store owner that she is seen wearing a pendant indicating her climbing the social ladder. The movie captures the story of up to twenty years and the makeup has been used to show these characters age. While Ennis (Ledger) and Jack (Gyllenhaal) are initially clean-shaven 19-year-old boys when they first meet. They age throughout the film with Jack growing a mustache by the end of the film and Ennis’s grey hair with wrinkled skin. Lureen’s hair is turned higher and her make-up thickened to give her an aged appearance. 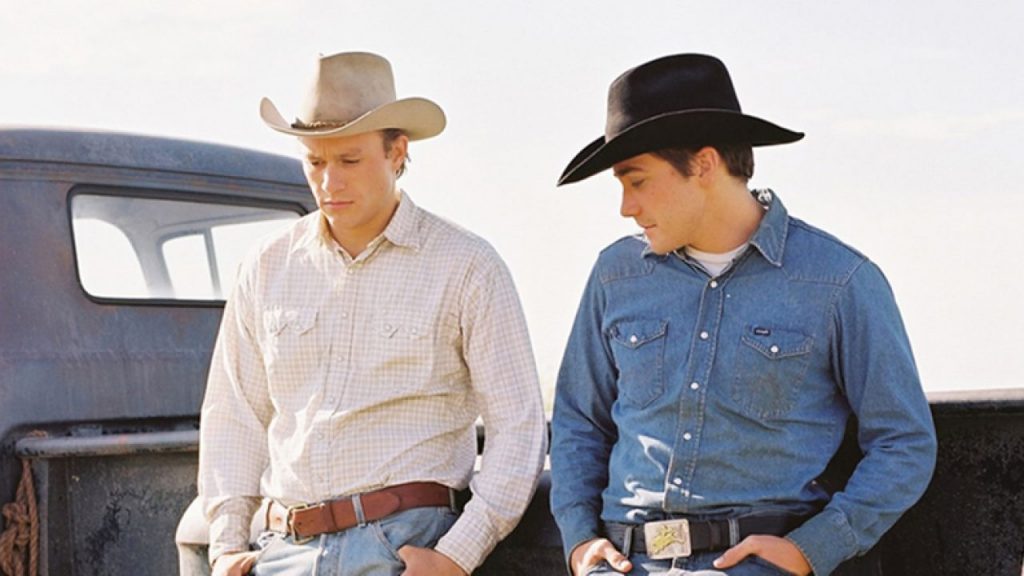 Colors are an integral part of any shot as they, combined with lighting, provide an insight into the mood and intensity of the characters as well as the setting. For instance, on the Brokeback Mountain (2005), vibrant colors such as the blue sky, lively green trees, crystal blue water represent a welcoming and amiable environment for both of these men.

There is a drastic change in the color scheme when they move back to Wyoming and Texas. Production designer Judy Becker in an interview said, “When I met with Ang the first time, we talked about making the color palette slightly desaturated and somewhat subdued for most of the movie. Brokeback Mountain (2005) represents a freedom that Ennis and Jack don’t feel in their towns.” (Focus Features) Ennis’s house is full of dull colors while that of Jack has a contrasting vibrancy. It can be interpreted as Jack being happier than Ennis for he has come to terms with his sexuality and accepted himself for who he is, also indicated by Jack’s visit to a male prostitute in Mexico while Ennis only accepts his love and sexuality after Jack dies.

On the mountain, when Ennis hugs Jack from behind they can be seen wearing a brown and a green jacket respectively. Curtis Tappenden, Luke Jefford and Stella Farris in their work Graphic Design: Foundation Course explains the possible meanings associated with colors and defines Green as one with “emotional correspondence with stability”, safety, growth, and harmony while brown is identified with comfort, endurance, and stability (04) Thus, pointing towards the comfort that these two shares around each other. 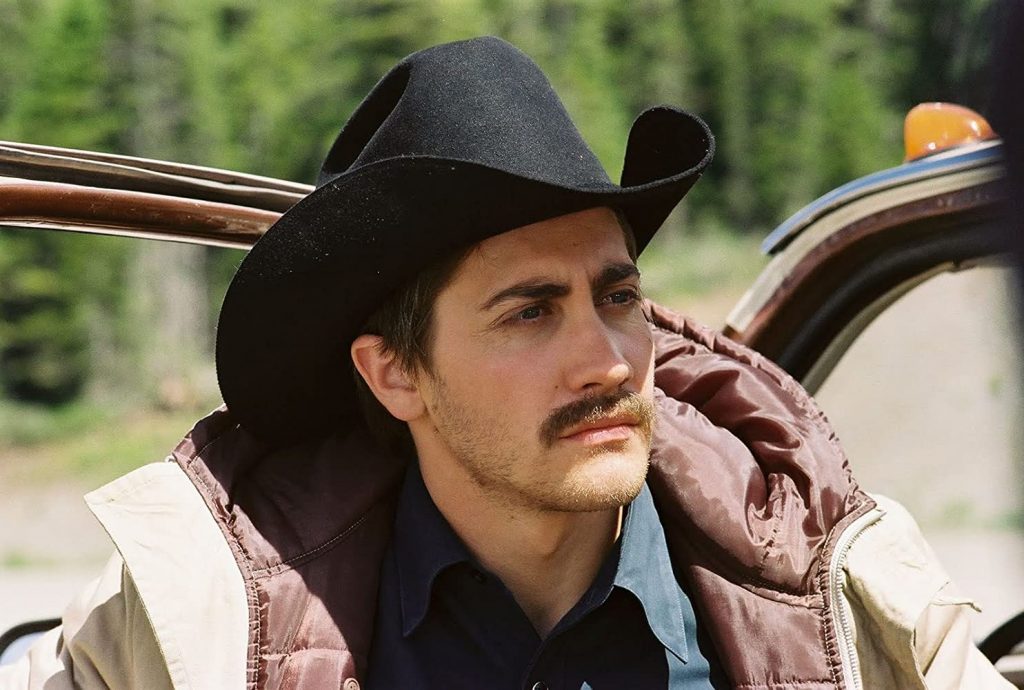 Sound is another important element that is not visible on-screen but its effect can be felt and is used by the filmmakers to heighten the emotions. These are categorized into Diegetic whose source is visible or implied in the film such as dialogues or music originating from a visible instrument et al. and non-diegetic whose source is not present or implied in the narration such as music or songs in the background.

Gustavo Santaolalla, the music composer of Brokeback Mountain, in an interview, revealed: “In an unusual reversal of how a film is commonly scored, the music was created first and used as an inspiration for the film’s shooting and for the actors.” There is a sad background score, “I Don’t want to Say a Goodbye” when Jack and Ennis are parting ways while it turns to “The Wings” as the film ends with Ennis’s “Jack, I swear.” Another song “No One’s Gonna Love You Like Me” to which Jack and Lureen dance when they first meet seems to be ironic in Jack’s case because there is someone who loves Jack more and who Jack desires more.

Brokeback Mountain (2005) is appreciated for its dialogues that represent the depth and complexity that characters across the film share with each other. Ennis’s double negation, “I not no queer” after having sex for the first time to Jack’s “I wish I knew how to quit you” that comes after Ennis’s constant refusal to Jack’s proposal of settling in Mexico, bring out their love that is essentially dangerous for it subverts the very premise of patriarchy. Silence is also transformed into dialogue.

Unsure of the vocabulary to use to verbalize their experiences and what they feel, Ennis and Jack communicate with each other by staring into each other’s eyes, making their silence a language in its own right which brings us to what Sita says to Radha in Deepa Mehta’s Fire, “There is no word in our language to describe what we are or what we feel for each other.” The only medium to communicate in a world that is forced to seal their mouths is the loud noise of silence, gazing into the eyes.

If You Enjoyed Reading About Brokeback Mountain (2005), Also Read:

How “Call Me By Your Name” Is A Ripe Celebration Of First Love
Loev (2017): Subtly Powerful Gay Themed Cinema From India
List of Best LGBTQ Films