Explainers
3 weeks ago
by Abirbhab Maitra
0

Five friends go to a isolated cottage to spend their ‘New Year’ holiday. But they don’t know that their planned ‘New Year’ celebration is soon going to be a nightmare. The place gets hit by the worst blizzard possible and they gets trapped with no one to help them out from the situation. The power is out, their food is running out, and they are slowly and surely succumbing to paranoia.

This is the brief story of Coltan Tran’s new survival horror film Snow Falls. Now, from this brief introduction, we all can agree that this is an oft-repeated story-line in movies. And, without a doubt, in this case, the director tells us the story in its traditional form, with no intention of subverting genre conventions. So far, everything appears to be in order. However, the problem arises when the basic execution is flawed.

The film’s writing is so bad that it fails to create basic horror scenes on the screen. And if the horror is not working in a horror film, it is undeniably going to be a mess. And it certainly does, despite the fact that it has the potential to tell a gripping story of paranoia, isolation, and survival. Though some directorial choices work for me and at the end, save it from being miserable, the film becomes nothing but a waste of time.

This article will go over the film in greater depth. So be aware that it will contain spoilers.

Five friends – Andy, Eden, Kit, Em and River decides to spend their ‘New Year’ vacation in the cottage of River’s parents situated in the remote skiing destination called ‘Snow Falls’. These people are extremely close to one another. They make each other laugh and have an incredible bond. Kit is the group’s party boy and prankster; Em is the awkward girl who is always concerned with her stomach; Andy is Kit’s partner in crime as well as Em’s boyfriend; River is his parents’ obedient son who always tries to follow their instructions to keep their antiques secure, and last but not the least Eden is the nerd of the group, who recently lost her mother.

Among the five people, Eden is the most mature person. She is a medicine student and always try to maintain a healthy balance between fun and seriousness within the group. The trip is actually intended to lift her spirits because she recently lost her mother. She appears to be extremely resilient on the outside, but she frequently thinks back on her mother’s final words before passing away (she mentions the incident in the film stating that her mother said her that she was cold). Those words haunt her till this date.

While everything seems quite good at first, the situation turns upside down suddenly. On the ‘New Year’s Day’, they hear the news that two back-to-back blizzards are coming towards Snow Falls and they are going to be struck there for some time. And as soon as the blizzard arrives, the power goes out and the generator stops working.

They assemble in the living room and light the fireplace since they are out of options to stay warm. They run out of food and wood to light the fireplace in the following two days as the situation deteriorates. Eden understands that they cannot continue in this manner; if action is not taken, hypothermia will soon set in.

She advises everyone to keep alert at all times and urges that they ration their food since if someone gets cold and falls asleep, there is a danger that he won’t wake up again. So they experiment with a variety of methods to stay awake. Although those methods first seem to work, people quickly begin to experience the symptoms of sleep deprivation and start hallucinating. 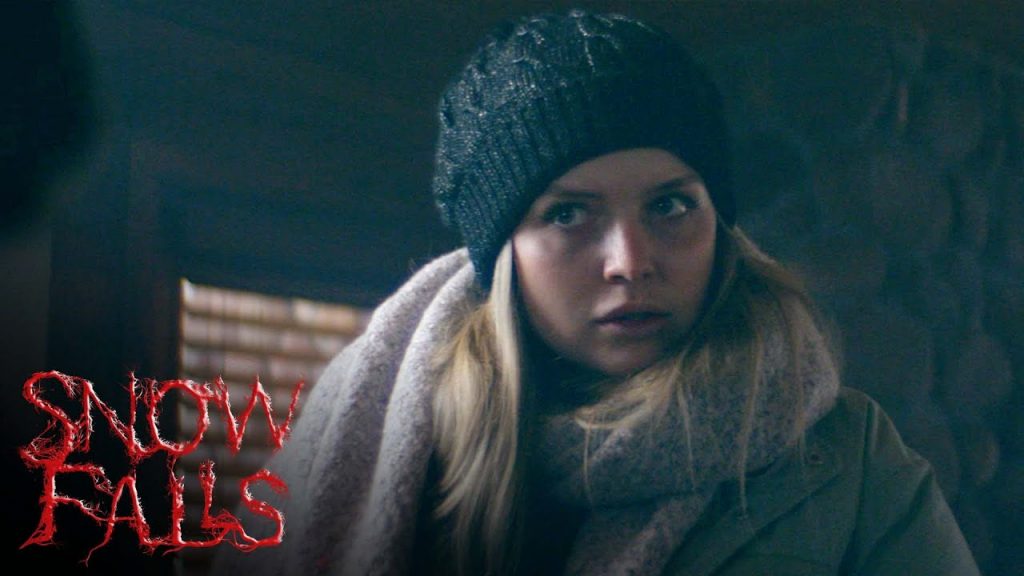 This starts with Kit and River. They both agree that the snow is evil and it is the reason for their mental and physical breakdowns. They relate their situation with their eating of snow on the ‘New Year’s Eve’ and how after that everything became a nightmare for them. River even claims that the snow might contaminated with some kind of virus, which is behind all of this. Em supports them and tells that she also feels the same as her stomach gets more upset after eating the snow. Eden and Andy refute their assertions and tell them to cease imposing their paranoia. Eden claims that their only issue is a lack of sleep.

The next day, Em gets missing. But soon she is found outside in the snow with no warm garments over her body. Andy rescues her and with Eden’s instructions, they try to make her warm in every possible way. Meanwhile out of desperation, Andy makes the plan with others to siphon out the gas from the car to turn on the generator. River agrees to this and to do so he goes outside. Andy, who feels uneasy because River is taking so long, goes out to find him. He finds out that River siphons out the entire gas and spills it out. When he is asked why he has done it, he simply replies that they can’t let the virus contaminate others. So, they have to die here. Angry with this, Andy beats River and takes him back home.

Eden calms River down, and a remorseful River apologizes. Meanwhile, Em goes missing again. Andy finds that she hides herself in the bathroom. He continuously tells her to open the door but she refuses. Em has an hallucinating of vomiting snow and out of shear paranoia she slits open her belly.

Eden tries her best to stabilize her with some first aid. Even though she begins to stabilize, it soon becomes apparent that if she is not quickly transferred to a hospital, she won’t make it. According to Eden, they must keep Em as warm as possible. So, in an effort to ignite the fire, a helpless Andy begins to chop down an antique wooden table.River objects to this, and as a result of their argument, he accidentally kills Andy. Em gets to her feet in a fit of wrath and picks up the axe Andy was using to chop down the table and tries to murder River as well. But Eden intervenes just in time to stop her.

Eden and Kit plan their next step after things settle down a bit. Kit suggests to go out in order to get help. Though it is a risky thing to execute, they both agree. In the night, Em hallucinates about the remaining gas of the car and tries to get there and start the heater of the car. She successfully gets there and starts the car and sees that Andy is waiting there for her (which suggests that all of these are just her hallucinations).

River and Eden go out to find out Em and at last, they find her body inside the car. Eden becomes shattered by this and River calms her down. On the next day, they both set foot on the snow to get help. They discover Kit’s naked body laying on the snow along the trail. When River asks Eden why Kit did that, Eden responds that it is known as “Paradoxical Undressing,” in which individuals remove their clothing to quench their internal fire while remaining chilly in reality. This is a typical behavior in hypothermia.

Realizing that only two of them are left, River and Eden share their bond and affection for each other. River eventually agrees to cut the antiques and goes to get the axe. But in the meantime, he hallucinates that Eden is seducing him to come over for a hot shower. He goes to the bathroom and opens the shower. But Eden comes to his rescue at the right moment. Soon, the lights come out and she tells him that now everything will be alright.

The two of them emerge from the cottage in the closing scene, and a police officer arrives to save them. He asks Eden if anyone is still in there. In which she replies that only she and River are the only survivors. But when she moves towards River, there is no one present suggesting that like everyone else River is also dead.

Snow Falls Ending Explained: Does the Final Scene a Hallucination of Eden?

In the final scene, we see a cop comes to the rescue of Eden and River. They sit on the outer porch of the cottage with the hope of everything will be alright now. But right then, the cop asks Eden if anyone in there is still alive. To which she replies that only she and River are alive while all other are dead. However, as she turns towards River, we can see that there is no one present. At this point, we can easily understand that River is dead and Eden is just hallucinating about him.

The most puzzling aspect of the entire movie, in my opinion, is how the cop comes to rescue them. Does that indicate Eden is hallucinating about him as well?

The film showcases from early on how the people are depriving themselves of sleep as a precautionary measure from getting affected by hypothermia and as a result how they are reacting differently. So, it is possible that Eden is also hallucinating about the cop coming for their rescue. As evidence, I would like to mention a previous incident, where she hears her phone ringing while her phone is long dead.

So, all the incidents are indicating that the coming of the cop is a hallucination of Eden and she is still struck in the snow.