Blood Relatives (2022): For a genre as unmissable for fang-fanatics as it is apparently impossible for vampire flicks to pull any new tricks out of the bag, Blood Relatives is a breath of fresh, undead air. It is sometimes a painful reminder that it’s time to say goodbye to the more outdated expectations from a movie about bloodsuckers. While not done in a conspicuous or defiantly mocking way–that is not to say Noah Segan didn’t have more than enough opportunities to do so–Blood Relatives unironically eulogizes everything that was once cool about dreamy vampires in leather jackets. Find a root, settle down, and get a dad-bod; Segan’s Francis does it all for a chance at fatherhood if it means he gets to protect his newfound fanged spawn.

Take out the vampires, and Segan’s film would have been just as endearing a road trip with a deadbeat, dysfunctional father trying to wrap his head around the concept of single parenthood and an adorable troubled teen with just enough sass justified by the circumstances. Our bloodthirsty duo that mostly accidentally kill around while driving a vintage American muscle car and succumb to the dreary spectacle of $20 motels make time for pathos just as easily as they get themselves in chucklesome situations.

Infusing Jewish politeness in a hardly badass vampire who is Holocaust-old, Segan defies the coolness meter bloodsuckers are expected to adhere to. Instead, we get an aimless drifter more lost than you would ever expect a supernatural being with a fair amount of powers to be. But stealing the show, with the writer-director-actor’s blessings, is Victoria Moroles with her angsty teen Jane, just starting to figure out her place amongst the living. It’s been a minute since anything about vampires made me wish it had a longer runtime, but the bloody father-daughter in Shudder’s most heartening film yet did leave a lingering warmth as they drove off into the sunset. Would it be too much to ask for a sequel? 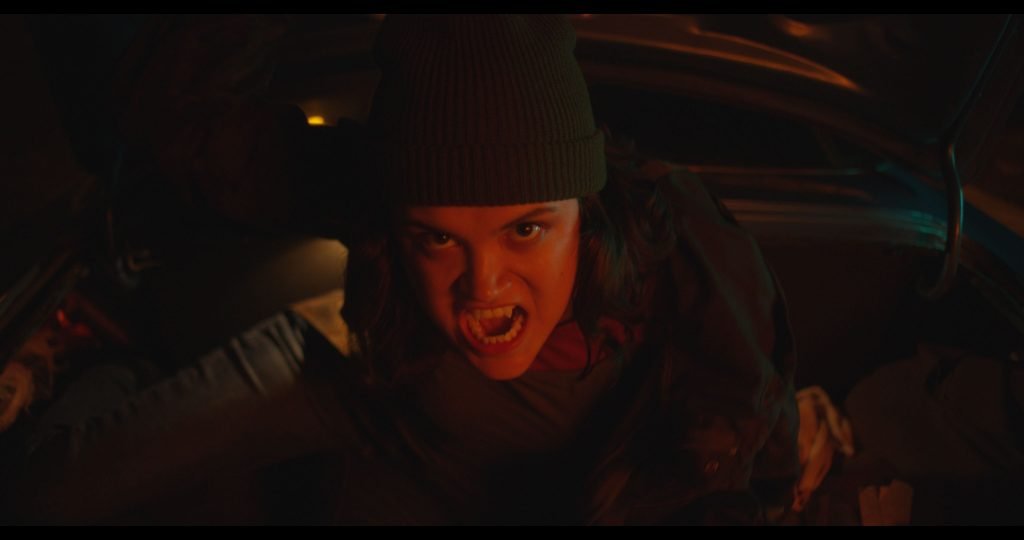 He is polite to the extent that he would repeatedly ask for permission to come in even if the vampire stereotype of having to be invited in wasn’t true; centuries-old vampire Francis (Noah Segan) chances upon a bigoted convenience store clerk and finds food along with the carb gaskets. His carelessly curated plan of staying off the radar and secluding himself comes to a halt when he drags the outcome of a 15-year-old hookup into his dingy motel room. Whether he likes it or not, he’s the father of a fearless halfling who has recently lost her human parent. Learning that 15-year-old Jane (Victoria Moroles) absolutely must wear sunblock to go out during the day, he starts to chip away at his denial, and it comes to a swift destruction when Jane fangs out at the sight of blood. RIP, a well-meaning motel worker who just wanted to ensure no shady business was involved.

Jane wants to connect with her newfound undead father on a deeper level, and Francis is losing it at the thought of handling the responsibilities. Shooting down her every attempt at bonding, leather-clad Francis plans to drop her off at her human-side distant relatives. The safety of loneliness is short-lived for him. Although finally finding someone he can open up to doesn’t stop him from dropping her off at her disturbingly religious aunt.

What follows is a fit of fanged rage that Jane has clearly inherited from her father. The teen vampire’s rite of passage bleeds through the mangled bodies of three obnoxious victims. And her father finds his way through the words of an understanding friend. But how will a homeless, jobless vampire provide a stable life for a kid?

A past wrongdoing comes in handy for Francis and Jane. In his wilder days, Francis had fried the brain of a poor chap who happened to be in his mid-30s. Now to break into the mental health facility and steal his identity, sweet-faced Jane is put to the test. Rewarded with a normal school life, Jane hardly has any problem with the inconveniences their secrets cause. After all, she now has a father who doesn’t mind losing a bunch of hair and eating mince off the styrofoam if it means his daughter can have a good life.

Francis is in a bit of a pickle when the head teacher at Jane’s school hands him a pamphlet about a single-parent support group that she’s a part of. Bad enough that he’s getting a beer gut from parenthood; he’s not about to sit down with a bunch of humans and discuss things that clearly don’t make sense in his fanged context. Jane isn’t giving up. When a heated exchange makes her storm off, Francis convinces himself to attend the meeting.

Single parents sitting around whining about their “human” troubles is not how the uber-cool vampire would like to spend the night. But at the same time, he’s surprised to find kindred spirits amongst the unlikeliest company. When the conversations begin, Francis joins in with his feelings about self-sacrifice being an absolute must when it comes to being a parent. Soothed by the group, he walks out, feeling that he fits in for the first time.

At the car door, he is stopped by Jane’s teacher, who lets him in on the biggest not-so-well-kept secret of parenthood–finding something they both enjoy doing and bonding over that. With the advice ringing in his ear, Francis drives up to Jane and takes her for a surprise ride. Jane, on the other hand, is fighting supernatural bigotry by being friends with someone who happens to be a werewolf. With the full moon glistening up the fated night, Jane’s friend leaves to join their family to celebrate their monthly tradition.

Francis finds the perfect thing to bring him closer to his daughter. A dirtbag drug dealer to kill. While the aspiring bloodsucker hides in the trunk, Francis lures him to the car. Just as she’s about to lash out, the blood bag throws up on her and runs off. Wiping vomit off herself, Jane is surprised that she feels hungry. But nothing is weird for the two at this point. Jane suggests that they stick to animals, but Francis protests because he fears going bald and getting a paunch. Jane reminds him that his priorities have changed. He’s had ages of being a good-looking young guy.

Blood Relatives pick up odd parenthood by its torso. Francis didn’t have Jane from the start. And when the two met, it was already the exact time parents started learning from their kids. Being an aimlessly drifting bloodsucker with no roots and no family, Francis had given up on the idea of having someone by his side. He forgot how it is to be responsible for someone’s well-being. In retrospect, Jane found him at the perfect time. As the two drive off into the sunset, loneliness has ended for them both, and it has ended for good.

Segan commands his directorial feature debut with a clear vision. It will not have the glamour of Dracula–nor will it have its gothic horror elements. Frankly, the closest Segan allows his indie vampire dramedy to go to horror are limited to the crimson-drenched scenes that partly add to the physical comedy. And be it the small budget or the actor-turned-director’s singular foresight, not delving further into the body horror elements saves the short span of the arbitrary sweetness from being tainted. Blood Relatives is everything it wants to be, and it’s pretty darn perfect at that.

Not crowding the stream of the narrative with flashy bloodthirsty, or over-the-top peripheral complexities allows the film to be character-driven, and that is where two of our leads shine. Noah Segan almost took it personally to relay the haphazard loneliness that Francis is unwittingly running from. He was last cool when disco was still a thing, and a century’s worth of existence hasn’t taught the manchild a thing about coexisting safely with the living planet-mates. You’d expect an ancient vampire not to fang out as an anger impulse, and that too because of a 15-year-old. But that’s not Francis. What Segan does with Francis’ disproportionate outrage at the thought of parenthood is a sight to see. His incessant back and forth is tamed by the real star on the stage, Victoria Moroles.

Moroles’ Jane simultaneously acts as a stabilizer to Francis’ mania and a mirror to how lost he really is in a world with no kin. It would have been perfectly acceptable for Jane to be a bitter goth teen with nothing but justifiable venom to spew at everyone. Instead, Jane appears with sanity amid vampy disarray. Their peevy angst is canceled out by one another, making them fit in better and easier. The father-daughter throwdowns are minor. Segan and Moroles’ impeccable chemistry takes over the second they meet, and by the time their mutual effort turns Francis into a standup dad, it is as though they were meant to be. Francis couldn’t ask for a better daughter, and Jane’s chaos finds home–if not self-aware caution– in her father’s destructive impulses.

Segan’s lead throwing around more Yiddish than you’d expect to hear in a 2022 American indie not only goes with his muted but effective physical comedy, it also shows a side of him that he desperately needs to communicate. For the lack of a better outlet or a safe space, his humor becomes his mode of release. Jane accepts him with all his embarrassing quirks, and that too with just a little bit of sass that makes her believable as a teen. Jane and Francis’ journey in the drab landscape that reeks of stagnant life is symbolic of how Francis’ life has been before Jane. Cinematographer Andrew Baird does justice to Segan’s plan for the film. He places the two odd bloodsuckers in the blandness of an American side that you’ve scarcely seen in movies without blatant stereotyping. But Baird throws in just enough color to signify the new hope that has suddenly emerged in Francis and Jane’s lives.

With a heart that doesn’t rely on melodrama to be felt, Blood Relatives births a new subgenre for vampire flicks. How you feel at any given point isn’t directly pointed at. Instead, you’re given a slight nudge in the right direction and witness the warmth surrounding the two misfits. Segan doesn’t shy away from melancholy–neither does he make the story linger in sadness and wallow. By the time the film ends, you’re left with the contagious contentment that pours out of Jane’s smile and the serenity on Francis’ face.

Jack Ryan (Season 3): Release Date, Where to Stream, Trailer, Plot, And The Cast