Industries and labor unions parallelly expanded in the US from the end of the civil war (1861-1865) through the First World War. As the rapid industrialization metamorphosed to a new phase during the European countries’ war, and as the Bolshevik revolution overthrew the autocratic Russian government by 1917, the labor wars in the US intensified, leading to violent struggles between management and labor. Industries hired thugs to keep the workers under strict surveillance and the unionists were either blacklisted or fired upon. The West Virginia Coal Wars, like most of the labor struggles on US soil, was an overlooked chapter in American labor history.  John Sayles’ Matewan (1987) deals with one of the pivotal incidents in the West Virginia coal wars (on May 1920), where a shootout between local miners, who were part of United Mine Workers of America, and company-hired men of Baldwin Felts Detective Agency resulted in 10 deaths (3 miners and 7 agents). The cycle of violence didn’t end with the Battle of Matewan. In fact, more insurrections, betrayal, and assassinations followed.

Sayles’ version of the vicious conflict between pro-union miners and union-busting gun thugs isn’t of course historically accurate, but he effectively brings to life the struggles of a people in a specific place and time. Through the retelling of neglected history, Sayles also drew parallels with the conservative and anti-labor stance of the then Ronald Reagan regime. Sayles’ version could naturally be dismissed as propaganda. Matewan (1987) does its share of myth-making, but its narrative is more layered than the rhetoric often posed by ‘red scare’ (or red menace) Hollywood cinema. 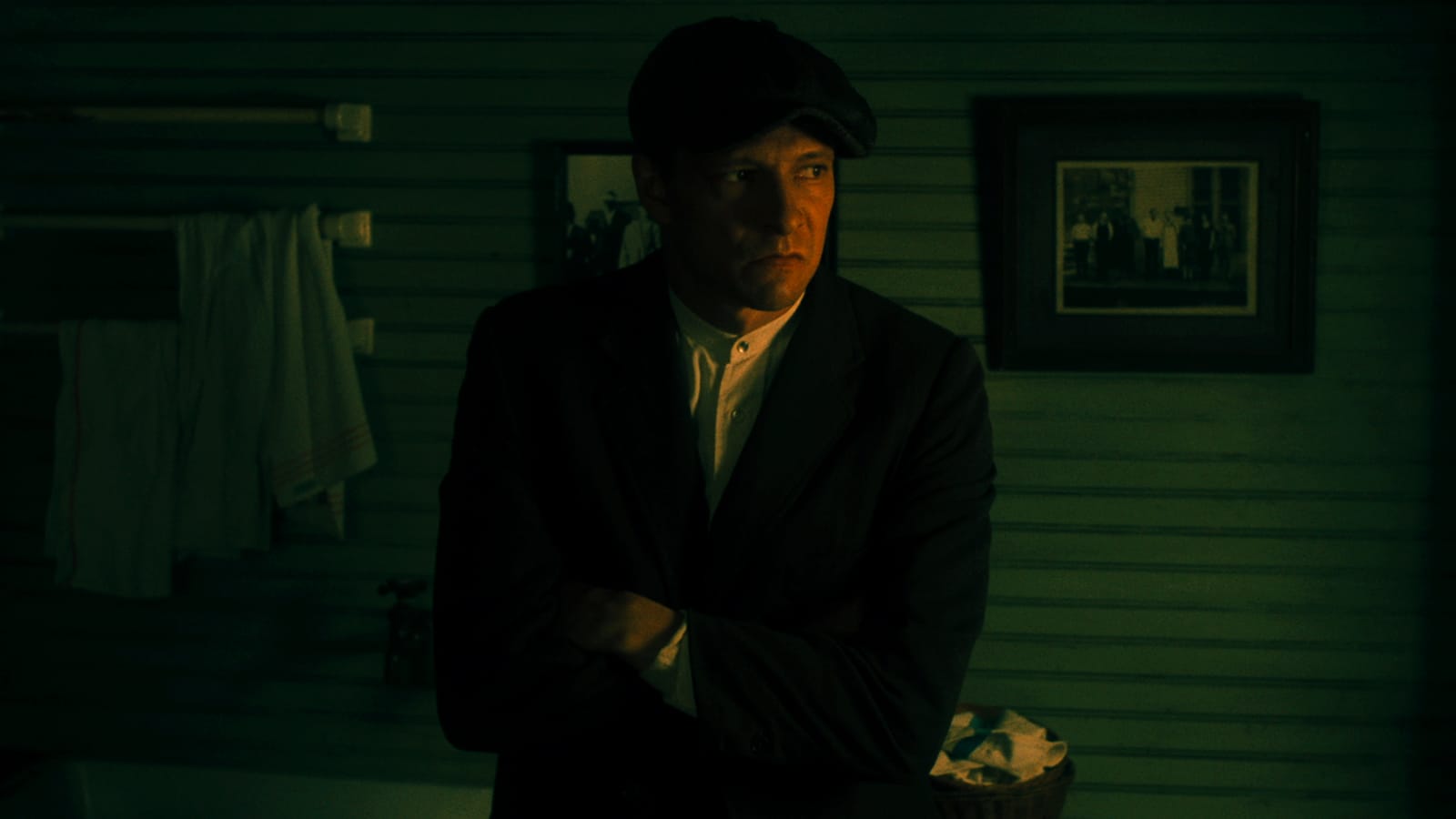 John Sayles is, foremost, a writer. He first came across the Matewan incident while researching for his novel Union Dues, which was published in 1977, way before he started his foray into independent film-making (in 1979). Matewan was Sayles’ fourth film, his three previous films belonged to different genres. From an artistic and budgetary perspective, Matewan was Sayles’ first big film and he effortlessly tackled that challenge, realizing all the elements essential to the creation of such epic retelling of a historical event. Moreover, two-time Oscar-winning cinematographer Haskell Wexler’s artful compositions – capturing the sublime, misty Appalachian Mountains – combined with Sayles’ manifest skill as a film-maker adds rich texture to the tale.

Related to Matewan: The 15 Best Movies About the Working Class

Matewan opens in a coal mine, a worker struggles with a shovel and pickaxe before setting up dynamite to break up the coal seam. Just when the dynamite is about to explode, the miner receives news of Stone Mountain Coal Company dropping the price for a ton of coal.  Sayles observes the spark that’s about to set off the dynamite, suggesting how the whole thing is going to gradually disentangle the circumstances that eventually lead to a bloody shoot-out.

Following the announcement of a strike by Mingo county miners in West Virginia, a train full of African-American miners stops outside the town of Matewan. Joe Kenehan (Chris Cooper), an atheist, non-violent organizer for the United Mine Workers of America (UMWA) is one of the train passengers. He observes the company men asking the black workers to get down, and soon they are attacked by a group of (white) native miners. An old and big black man named ‘Few Clothes’ Johnson (James Earl Jones) steps up and saves his men from the unforeseen fight.

Joe Kenehan gets off at Matewan station, where he meets Bridey Mae Tolliver (Nancy Mette), a young widow who has lost her husband to a mining accident. She spends her time watching trains passing through the station. Bridey Mae recommends Joe the boarding house, run by Elma Radnor (Mary McDonnell), also a coal-miner widow. Elma runs the Company-owned boarding house, where she lives with her earnest 15-year-old son, Danny (Will Oldham), and her elderly mother. Danny is a miner and a budding preacher, whose potent speeches stir the workers compared to the fiery yet loathsome sermon of the town’s head preacher (a cameo by Sayles). At night, Joe attends a clandestine meeting of local miners at the shop of C.E. Lively (Bob Gutton). Lively advises the miners to take up guns to deal with the company guards and the miners exported from other counties.

Joe firmly believes that violence would give the company people an excuse to hire gun thugs across the country and easily oppress their rebellion. He speaks for solidarity across ethnic lines; to take in African-American and immigrant Italian miners in their unionization struggle. When the native miners oppose ‘few clothes’ Johnson’s presences, Joe lambasts, “They [the bosses] don’t care what color you are or where you come from. You think this man is your enemy. This man is a worker. Any union that keeps this man out ain’t a union, it’s a club.”

It takes time for the Matewan miners to set aside their prejudices and to stick together as a single force. At the same time, the mining company hires two brutal ‘stormtroopers’ of Baldwin-Felts Detective Agency, named Hickey (Kevin Tighe) and Griggs (Gordon Clapp). They are pure villains; their bullying tactics make us wish for them to perish in the nastiest way possible. Nevertheless, the town’s Mayor Cabell Testerman (Josh Mostel), and most importantly the sheriff Sid Hatfield (David Strathairn) stands by the workers’ side, admonishing the two agents during few close encounters. But despite Joe’s good intentions and dreams of solidarity, things do get riled up, setting off a revenge cycle and a shoot-out.

Matewan predominantly highlights how the workers never organized to a greater degree in the US as they did in most of the industrialized Western nations. The industrial giants’ penchant for dealing the unionization efforts with unbridled violence and the relentless ethnic conflicts within the workforce (perfectly exploited by the management) is pointed out as the chief causes for this situation. Barbara Kopple’s powerful, Academy-Award winning documentary, Harlan County USA (1976) depicted how the bitter, violent standoff between management and labor has persisted even in the 1970s, the era of anti-war and Civil Rights protests. Harlan County is about coal miners’ strike in the southeastern Kentucky mines and as the strike escalates, we see miners and their women getting intimidated by gun thugs, and even a machine gun is aimed at picketing workers. The Reagan government policies of the 1980s and the succeeding regimes made sure the unions in the US stay relatively weak. 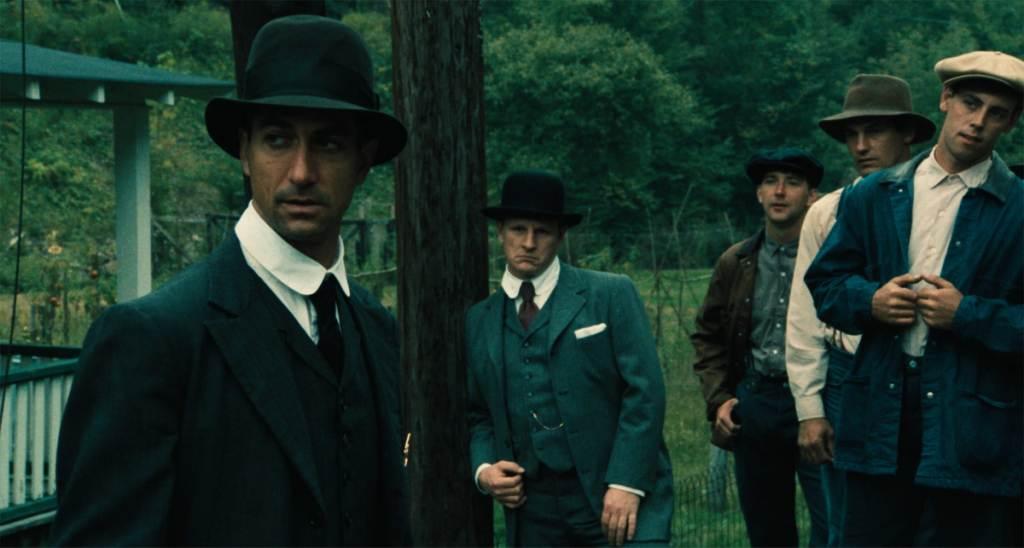 “I guess I am a Red”, Joe says at one point in the narrative, a word Hollywood had often treated with revulsion throughout the 1950s and 60s. It’s good that Sayles has written Joe’s character as a sweet, sensitive pacifist and not a firebrand revolutionary quoting Marx. Moreover, Joe isn’t a heroic figure, and his efforts to engage the workers’ moral conscience are considerably nuanced. Sayles turns the historical event into a morality play and with the voice-over of older Danny (called Pappy), he finds the right humanist focus to stage the Matewan massacre. Although Sayles’ narrative is straightforward he subverts our expectations in interesting ways. For instance, he avoids building a romantic subplot between Joe and Elma. And when the shootout begins, there are no single gun-wielding heroes as in Western films.

Sayles indicates that the violent culmination is a tragedy, even with the death of the narrative’s bullying antagonists. Pappy’s voice-over only confirms how the bloody gun battle was antithetical to the miners’ aspirations, substantiating Joe’s argument. Violence generally brings a sort of moral order in Hollywood cinema. Sayles, however, wonderfully downplays the shootout, leaving the implications of the bloodletting to haunt our minds. The fantastic casting is also one of the reasons that turn Matewan into a first-rate drama. Sayles even trumped this brilliant casting in his 1996 film Lone Star, my most favorite in Sayles’ oeuvre.

Overall, Matewan (135 minutes) despite historical inaccuracies and few archetypal characterizations is one of the best American movies to focus on labor politics and ill-treated workers.

Something in the Water: A Kinston Basketball Story [2020] Review - Glories of the past, present and future