“Set in the Texas border town of Frontera, Lone Star is a complex and ultimately rewarding tale of fractured relationships in an incredibly diverse American community.”

John Sayles is one of the quintessential and most under-rated American independent film-makers. He made his debut feature Return of the Seacaucus Seven in 1979, in the era of New Hollywood when already the American indie film circuit, bolstered by film-makers like John Cassavettes, Robert Altman, Martin Scorsese, David Lynch, have started to explore multitude of American subjects, oft-neglected by the pompous main-stream products of Hollywood. These pioneering works of the 1970s laid the strong platform for thriving American indie-film movement, which progressed under the subsequent generation of directors, from Coen Brothers, Spike Lee, Jim Jarmusch to Steven Soderbergh, Richard Linklater, and Jeff Nichols. John Sayles has made eighteen diverse and idiosyncratic feature films over his three-plus decade directorial career. He has made a well-meaning lesbian drama Lianna (1983), exploring themes which still remains uncommon. A film about a black Alien stranded in Harlem neighborhood (The Brother from Another Planet, 1984), a movie on the violent chapter of American labor movement in early 20th century (Matewan, 1987), a drama on complex inner-city ethnic clashes (City of Hope, 1991), a touching docudrama on a downcast victim of an accident (Passion Fish, 1992) and with each film Mr. Sayles has continued to subvert expectations and has withstood the constraints of genre narrative.

Nevertheless, it’s important to note that Sayle didn’t hate genre cinema. In fact, he started his career writing scripts for derivative yet profitable b-movies (Piranha, The Howling). In his interviews, Sayles reiterates that writing generic screenplays for others gave him a much clearer perspective when taking over the directorial duties. Sayles insists that although his films boast the basic structure of a genre cinema, he gained the ability to instill his own worldview into the structure due to his early writing jobs for Roger Corman and Joe Dante. Even though the indie film-maker’s works from the 2000s haven’t collected a great many awards or earned festival attention, he continues to churn out distinct films (he is currently penning the script for Django Lives! Franco Nero reprises his role as the coffin-dragging gunfighter). Eminent film critic Roger Ebert has persistently championed the works of John Sayles. He hailed him as ‘a rebuke to directors who complain they can’t get their dream films off the ground’, further stating that ‘He is the complete independent director, self-starting, autonomous, one-stop shopping’. It is through Ebert’s reviews I discovered John Sayles’ oeuvre (Sayles himself once mentioned that ‘Siskel & Ebert’ show familiarized his works among broader American audience).

While profiling the director’s cinema, Roger Ebert remarks, “Sayles’ films aren’t exercises in style, like so many Sundance titles. They’re about something; about relationships, society, and politics.” Sayles reflected on those clashes between cultural, social, and economic issues through a limited perspective as well in an epic format. If there is one quintessential movie which elegantly and broadly intertwined Sayles’ themes and ideas, then it must be his novelistic multi-generation and multi-ethnic tale titled Lone Star (1996). Set in the Texas border town of Frontera, Lone Star is a complex and ultimately rewarding tale of fractured relationships in an incredibly diverse American community. The film starts off as a familiar murder mystery with a middle-aged, white-skinned sheriff, raking up misdeeds of the past. But Sayles moves away from the perspective of the Anglo world and focuses on the town’s majority Mexican community and the minority African-American community. By moving through these co-existing yet parallel worlds, Sayles brings forth multiple three-dimensional characters, who despite their difference in class, skin-tone, and culture are connected to each other in interminable ways. 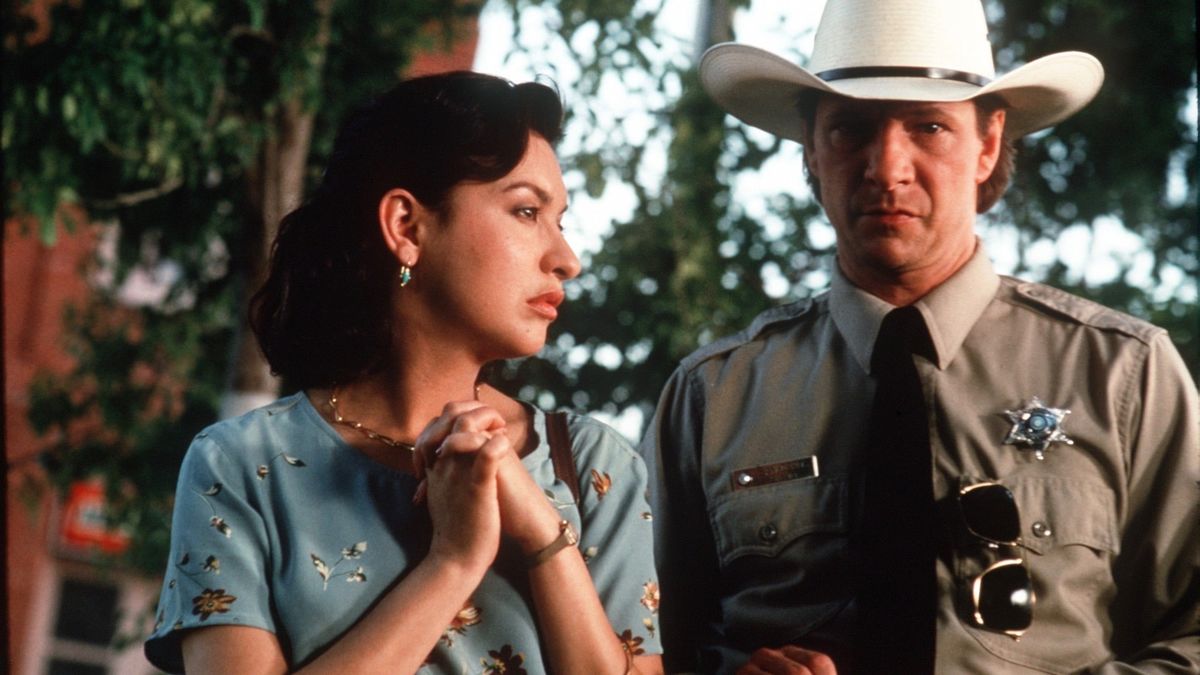 John Sayles is a master when it comes to immersing audiences into an atmosphere. In Lone Star, he sets up the town’s conflicting cultural and historical perspectives in a subtly profound manner. As a matter of fact, the town serves as a microcosm of the tumultuous nature of all American borderland states. In one early scene, set around a school-board meeting, Anglo teachers complain about fellow Hispanic teacher Pilar Cruz (Elizabeth Pena) for teaching the harsh realities of both sides in the Mexican-American War. One white teacher remarks, “We won, we get bragging rights.”

But Sayles doesn’t draw a clear demarcation point in the conflict between Hispanics, whites, African-Americans, and Native Americans. When it comes to issues of business and political power, the ethnic or racial division becomes obscured. To dig deeper into the dense complexities of this diversified community, Sayles uses the intrigue of a murder mystery. Lone Star opens with the excavation of the nearly four-decade-old skeleton, believed to be the remains of long-missing former sheriff Charley Wade (Kris Kristofferson). The skeleton with its gaping mouth seemed to be laughing at the mistakes of the past which are about to come to light and haunt the present. The figurative skeletons of Frontera’s past – its unremitting racism and secret relationships – are now being sought out by Sheriff Sam Deeds (Chris Cooper).

Sam is the son of the town’s legendary figure Buddy Deeds (Matthew McConaughey), who took over the sheriff duties after the alleged disappearance of Charley Wade. Sam who lived in the shadow of his father’s legend had a very troubled relationship with him. Buddy is respected across the black, Hispanic, and Anglo communities, and the town is about to commemorate Buddy with a bronze statue. Sam is doubtful of his deceased father’s god-like status and firmly believes he is behind the killing of Wade. Sam quietly approaches various personalities in the community in search of the truth. Almost all of them insist upon the sadistic and racist temperament of Charley Wade. Over the course of an investigation, Sam’s own past in the town sneaks upon him. He tries to rekindle his relationship with old high-school sweetheart Pilar, who is now a school teacher. Pilar is the mother of two teenage children whose husband has recently passed away. She is also the daughter of Mercedes Cruz (Miriam Colon), a successful Mexican restaurant owner who somehow rejects her Hispanic identity. “In English, please! We are in the U.S.”, she censures at the Mexican workers in her restaurant.

In a way, the narrative is more about three central characters learning the truth about their parents than about discovering the identity of a killer in a 40-year-old murder. Apart from Sam Deeds and Pilar Cruz, the other important character in Lone Star is Colonel Delmore Payne (Joe Morton), who has taken charge of the soon-to-be-closed military base situated in the town. Delmore holds bitter feelings towards his absentee father Otis Payne (Ron Canada), the town’s unofficial historian and beacon of small African-American community. Otis runs a bar, which he says is the only comfortable, relaxing place for the town’s black population. In the past, Otis Payne has faced immense troubles from Charley Wade. Sam’s obsession with the case eventually brings out the truth, yet what’s endlessly intriguing about the narrative is how all the well-crafted characters reach the point of realization and eventually seek out redemption.

In his four-star review of Lone Star, Roger Ebert wrote, “This is the best work yet by one of our most original and independent filmmakers……it’s about how people try to live together at this moment in America.” John Sayles discloses the racial complexity of American towns like no other American drama, without succumbing to the temptation of portraying one side as corrupt or bad. Despite the superb multi-layered script, the film wouldn’t have been this majestic if not for Sayles’ restrained directorial approach. With each diverse vignette, he introduces new characters and scenarios yet elegantly guides us towards the truth, eschewing the feelings of a disjointed narrative. The most stand-out aspect of Sayles’ direction is his skillful use of flashbacks to deepen and progress the narrative. When the characters recollect an event from the past, Sayles doesn’t employ cuts or dissolves but rather uses a smooth tracking shot to make the transition into the past, as if the characters’ younger and older selves co-exist in the same frame, their clear-cut memories firmly attached to the dusty landscapes. Sayles is often accused of lacking an exciting visceral style, but with Lone Star he operated at the top of his creative power, incorporating stylistic transitions in a non-contrived manner. 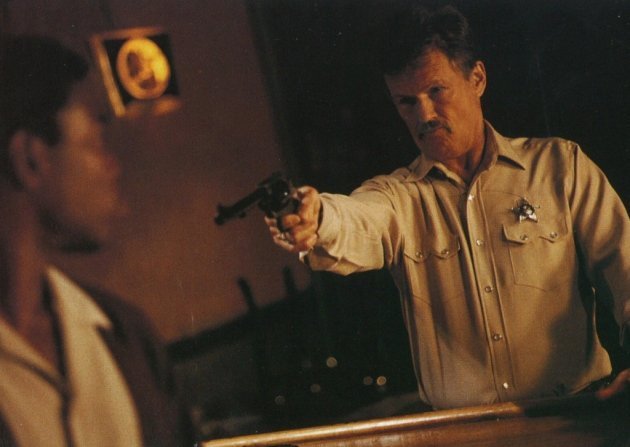 Lone Star may not work for those expecting a twisted murder mystery. Staying true to his novelist roots, Sayles takes his sweet time to realize each character, even the ones occupying the tale’s periphery, before disclosing the vital plot points. This may endlessly frustrate viewers expecting a thrilling narrative. Take the interracial relationship between the officers at army base or the scene when Colonel Delmore tries to reprimand a black female soldier (Chandra Wilson) or the drawn-out conversation between Sam and his estranged, half-crazy, football-obsessed wife (Frances McDormand), all these sub-plots doesn’t have anything do with the narrative’s central mystery.

Also, Read: The Assassination of Jesse James By The Coward Robert Ford [2007] – A Tale of Fame & Infamy

Nevertheless, these casual exchanges bring richness to the characters and the atmosphere. Moreover, some of the movie’s memorable lines hail from such digressive yet beautiful scenes (“it’s always heartwarming to see a prejudice defeated by a deeper prejudice”, “This stretch of road runs between nowhere and not much else”, “So I’m part Indian? By blood you are. But blood only means what you let it”……….). The other major reason for Lone Star’s near-masterpiece status is the picture-perfect casting. Chris Cooper, one of Sayles’ frequent collaborators, proves what a measured actor he is, conveying his character’s depth and humanity without using unnecessary hysterics. The rest of the ensemble from Elizabeth Pena, Kris Kristofferson, Joe Morton to Ron Canada and Matthew McConaughey (a cameo role), each of the actors play their role in a subtle and enthralling manner.

Lone Star (135 minutes) is one of the best and fascinating works of American independent cinema. It uses a volatile backdrop of a borderland town to pit the threatening nature of a darker past against the endurance of love.  The final outcome is free of contrivances and saturated with feelings of compassion and quiet sadness.

The Woman in the Window [2021]: Netflix Review – Predictable Hitchcockian thriller dwindles while trying to outsmart the viewer