Wanuri Kahiu had to struggle along with the producers for almost seven years for a film to get made. After all, she was trying to create a Lesbian drama in a country where it is considered not just unnatural but is punishable as a crime. ‘Rafiki’, the same Kenyan film, directed by her was selected for the Un Certain Regard section in the Cannes. As a result, the initial ban by the government and the court was lifted for a limited window of around a week. It’s truly a testament of her patience and perseverance because of which such topics are being discussed where it’s the utmost necessity.

Rafiki is a romance-drama which happens between the daughters of two political figures from a Kenyan town. Kena (Samantha Muatsia) who’s the daughter of a shop owner running for candidacy; has a tomboyish charm and personality. Her friend Blacksta (Neville Misati) who she spends most of her time with can’t understand why the feelings from his side don’t reciprocate from the other. She can’t find a reason either. After all, both of them have been a part of a society where they’re not exposed to any other type of relationship.

In the same plight, Kena gets a brief glimpse of Zika (Sheila Munyiva) dancing effortlessly with her over-enthusiastic girlfriends. The instant attraction towards each other is apparent yet isn’t contextualized from either side. Zika’s father who’s a reputed politician from their town might be one of the reasons. But their romance starts to blossom only after their direct interactions with another. Both of them, want an escape from the reality they’re in, especially the lives that the women of their society were assigned to. The mutual quest for freedom from the societal prejudices forms a stronger bond between these two souls. They bond and confess to one another with a complete realization of their identity. Still, what starts out as a breezy, chatty romance doesn’t take long to get testified in the world around them. 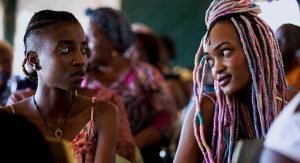 The best part about the film is the performances by Munyiva and Muatsia, where the chemistry fits in just perfectly in the world that the director aims to create. Munyiva who plays an outwardly fierce yet vulnerable Zika is immensely effective in the role with a complete realization and the required ease for the character’s flamboyant persona. The cinematography is gorgeous with the colors popping out to enhance their fantasy world. The tragedy behind the subject is itself so engrossing that it bears the ability to emphasize with the characters.

Sadly, the film doesn’t grow beyond that while often tapping on several familiar tropes. I won’t be surprised if a non-native speaker understands the context of the scene without reading the subtitles. The dialogues are merely functional and expository, often lacking the required emotional depth. One may even neglect the technical flaws with the shoestring budget it was made for. But that can’t justify the use of unmotivated visuals lacking a clear purpose to be a part of it. The editing, as a result, feels choppy resulting in continuity errors.

And that doesn’t help for an ordinary narrative which doesn’t spread its wings completely to be outright against the social stigma or even resulting in being rebellious. The climax, as a result, obviously feels like a cop-out. The performances do elevate the material to a better level with the required intimacy. Only if a little more attention was given to its structure, the film could have been more than just an ordinary affair.

Girlfriend [2019] Review: The Unseen Zeitgeist of the Contemporary Romance