“Uppercase Print (2020) is the second documentary feature from Radu Jude, in which a real-life case of political persecution offers him a fresher perspective to explore Ceaucescu’s Romania.”

Radu Jude is the most prolific and intriguing film-maker of the Romanian New Wave, a movement initiated by the second generation Romanian film-makers, who unflinchingly examine the residual effects of Nicolae Ceausescu’s authoritarianism (a brutal regime that ended after a bloody revolution in 1989). Radu Jude’s first short, The Tube with a Hat (2006) won an award for Best Short Film at Sundance. He followed it up with two miserabilist slice-of-life feature-films, The Happiest Girl in the World (2009) and Everybody In Our Family (2012), which were loaded with deadpan humor and great empathy.

Then breaking away from the general discourse of Romanian New Wave narratives, Jude made Aferim! (2015) and Scarred Hearts (2016). The first one (won the Silver Bear at Berlin) was set in the early half of 19th century whereas the other film was set in the summer of 1937. Although detached from the tensions of post-communist Romania, Jude’s journey back to the historical roots (that’s totally devoid of nostalgia) deconstructs the so-called nationalist image. Through a reframed historical drama, Jude diligently investigated the roots of present-era prejudices. Jude’s next, I Do Not Care if We Go Down in History as Barbarians (2018) was yet another brilliant, satirical discourse on violent nationalism (adorned with a delectably meta-narrative). Uppercase Print (2020) is the second documentary feature from Radu Jude, in which a real-life case of political persecution offers him a fresher perspective to explore Ceaucescu’s Romania. 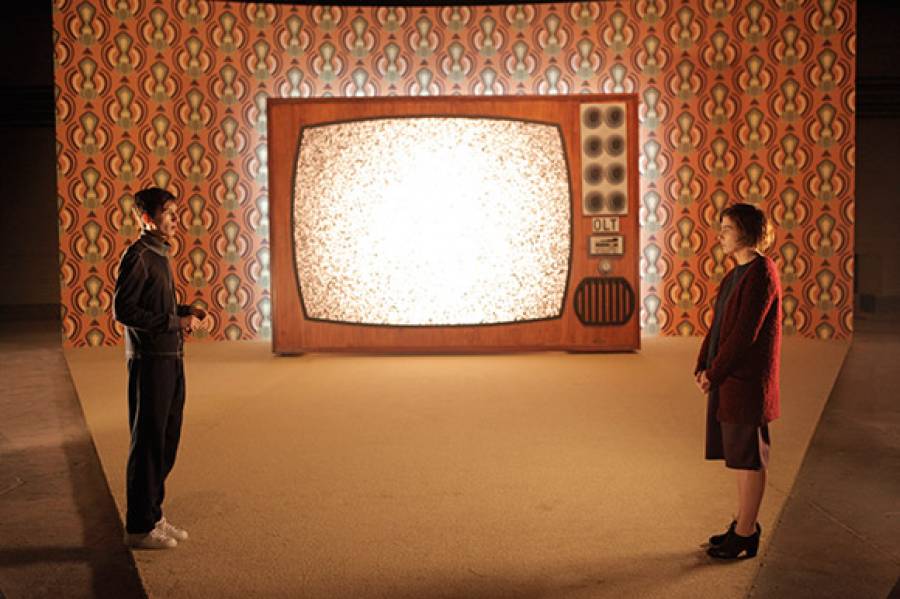 Adapted from Gianina Carbunariu’s 2012 play, Uppercase Print heavily draws from the extensive archives of Securitate (the vicious secret police agency) to delve into the tragic persecution of 16-year-old Mugur Calinescu. In 1981, influenced by Radio Free Europe (which was funded by CIA until 1971) and inspired by the Solidarity Movement (in the neighboring Poland), the rebellious and disillusioned teenager in his native town of Botosani expressed his dissent against the authoritarian regime on the walls of local Cultural Centre.  The graffiti slogans written with blue or white chalk in uppercase delivered allegedly subversive messages such as: “We want freedom and food”, “We can no longer accept the miseries and injustices of this country”, “We are sick of waiting in endless queues”.

Related to Uppercase Print: The Edge of Democracy Netflix [2019] Review – A Captivating and Sobering Account of Breakdown of Democracy

Set in a theatrical stage with abstract backdrops, the documentary clinically presents (from the Securitate files) the Kafkaesque surveillance, apprehension, and later the interrogation of Mugur Calinescu. Radu Jude interweaves this forensically detailed investigation with the official history of Ceaucescu’s Romania, i.e., state propaganda unashamedly peddled through National Television of the period. The television footage features assortment of cultural, social propaganda that’s loathsome as well as darkly humorous. Apart from the usual dosage of sit-coms, cooking programs, home appliances advertisements, some of the platitudes and hypocrisy aired through television are downright laughable. The problems of carpet hanging & drying, the apprehension of drivers unnecessarily using car horns, the alleged celebration of women’s beauty with a sexist slant, all these footage are carefully selected.

In fact, the archive montages offer a welcome respite from the repetitive, deadpan monologues of the play’s characters. In laying out all the little details of Calinescu’s case (from deploying handwriting experts to undercover agents for an expression of dissent), Jude creeps us out with the climate of fear and paranoia evoked by bureaucratic authoritarianism. Yet the filmed version of the play is often dispassionate and stilted that Uppercase Print becomes an exhausting experience at some point. The ironic treatment of television footage although unsubtle, incorporates dynamism of sorts to the documentary, addressing the repression prevalent in the public and secret spaces. Furthermore, what Uppercase Print lacks in terms of dramatic impact, it tries to make up through stylized sets, especially the Last Supper type of diorama with a malevolent authority justifying Securitate’s tactic.

On its own, Mugur Calinescu’s tragic life and death says a lot about the profoundly disturbing totalitarian paranoia. Now hailed as a ‘fighter against the totalitarian regime’, Calinescu’s life was ruined after the interrogation. His ‘reformation’ included routine harassment and torture. In 1983, Calinescu was diagnosed with leukemia, and two years later on February 14, 1985 he died. After the 1989 revolution, it was openly claimed that Calinescu was irradiated during Securitate investigations, through a substance the authorities slipped into his coffee cup. Jude’s Uppercase Print doesn’t provide any answers regarding the irradiation claim (although it still stands). But it won’t be far-fetched to say that Mugur Calinescu died under the hands of a surveillance state.

Overall, Uppercase Print (128 minutes), despite a moderately dull and cold-eyed presentation, pays tribute to a young man’s brave resistance against authoritarian power while also shedding light on the insidious machinations of state propaganda.