Fire At Sea [2016] — An Elegiac Reflection on the Unimaginable Agony

Italian film-maker Gianfranco Rosi’s documentary features transcends a barrier existing between documentary and docu-drama. While auteurs like Vittorio de Sica and Abbas Kiarostami picked up common people from the streets and made them to interpret on fictional characters, Rosi strives hard to film people as they go about their own daily lives. For most part, Rosi doesn’t tell people within the frames to do certain set of actions. In order to offer an intimate portrait of his chosen subjects, Rosi would observe and interact with them without cameras. So, each of his documentary projects take at least a year. Rosi’s Golden Lion winner “Sacro GRA” was about a group of vibrant, quirky people, living around the famous Ring-road that encircles Rome. The film-maker spent nearly 3 years with the people, while documenting life around famous road of Rome. Rosi’s other important work was “El Sicario, Room 164”, which was about a hit-man working for a Mexican drug cartels. Face covered by a black hood, the man who is an expert in torture (also employed by Mexican police) talks about his life of crime, kidnapping and torture.

I haven’t seen his other works, but they were also said to be about societal outsiders. With his recent Golden Bear winning (at Berlin Film Festival) documentary feature “Fire At Sea” (2016), Gianfranco Rosi once again explores the life of people living in the periphery. He arrived to a picturesque small island town ‘Lampedusa’ – situated half-way between Tripoli and Sicily – and stayed there for a year to weave a distinct perspective on the islander’s life that’s part anthropological and part spiritual (resembling an elegiac poem). Rosi chose a smart, curious 12 year old boy Samuele as his central subject. The calm, observant camera also glimpses into every-day routine of Maria, Samuele’s grandmother, who makes daily calls to the local DJ to request her favorite songs; the DJ himself and a local doctor’s routine life are also observed. Nevertheless, “Fire At Sea” gained immense attention across the world, because of the images of shocking reality, unfurling few miles from the coast of Lampedusa. 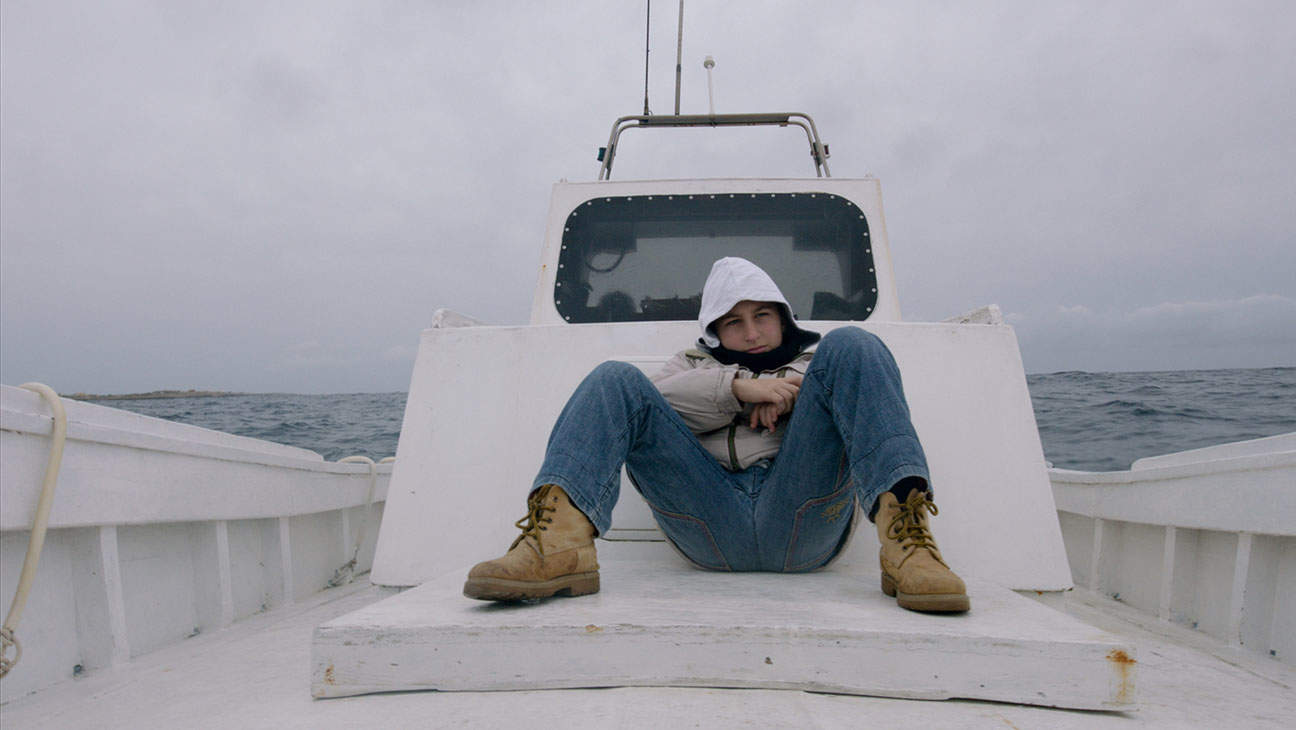 For the past two decades, the small island has witnessed the passage of at least 40,000 refugees, hoping to find a new life in Europe, away from all the famine and war. The refugees are dangerously overloaded into small vessels and make a harrowing journey. Over the years, at least 15,000 refugees who have attempted to cross died during the journey. For the last few years, the death tolls are getting world’s attention as the European Unity is tested through the arrival of thousands of refugees. The disturbing visuals of dehydrated refugees, getting rescued by Italian Coastal Guards in white jumpsuits provides an alarming, non-journalistic context of what the West calls as ‘migrant crises’. But, despite those images, “Fire At Sea” shouldn’t be mistaken as a documentary (with talking heads) about European migrants. It is primarily about Samuele and life in the island. Gradually, through the images that torture our consciousness, Rosi’s documentary does become a meditation on the presence of a quotidian reality alongside horrendous reality. Seen from that perspective, Lampedusa and its simple inhabitants become a symbol for all of us: people living in relative safety, with own set of existential crisis, and totally unaware that terrifying hardships are but slingshot’s throw away. In an interview to ‘Guardian’, director Rosi talks about this dichotomy (quotidian and terrifying reality) by remembering the day he showed the film to 1,800 Lampudesans, in the town’s main square: “Many people were so moved by the movie, and they were crying, and they said they didn’t know about all this.”

At an earlier point, Samuele’s Grandmother Maria, while preparing a meal hears the radio announcement of recent migrant death tolls. She mutters “poor souls”, which is the only point she’s directly engaged with the crisis. As Samuele sits facing the sea and fires an imaginary gun (like when we boys used to do in our childhood), he is not aware of people dying a terrible death, just a few kilometers away in the middle of sea. Most of the islanders have never witnessed the experiences of the asylum seekers and life just goes on, despite all the brutality closer at hand. The only man in Rosi’s documentary, who’s closely engaged with the crisis, is the doctor. He is a compassionate man, who vividly talks about the day he saw a boat carrying 850 people, divided into three classes and its occupants charged thousands of dollars for the journey. He notes how the third class passengers (who paid $800) are kept below the deck, who were not only dehydrated (by the 7 to 10 day journey), but also fatally burned by the combination of sea water and gasoline. The same doctor also compassionately hears Samuele as the boy talks about his allergies and anxieties. 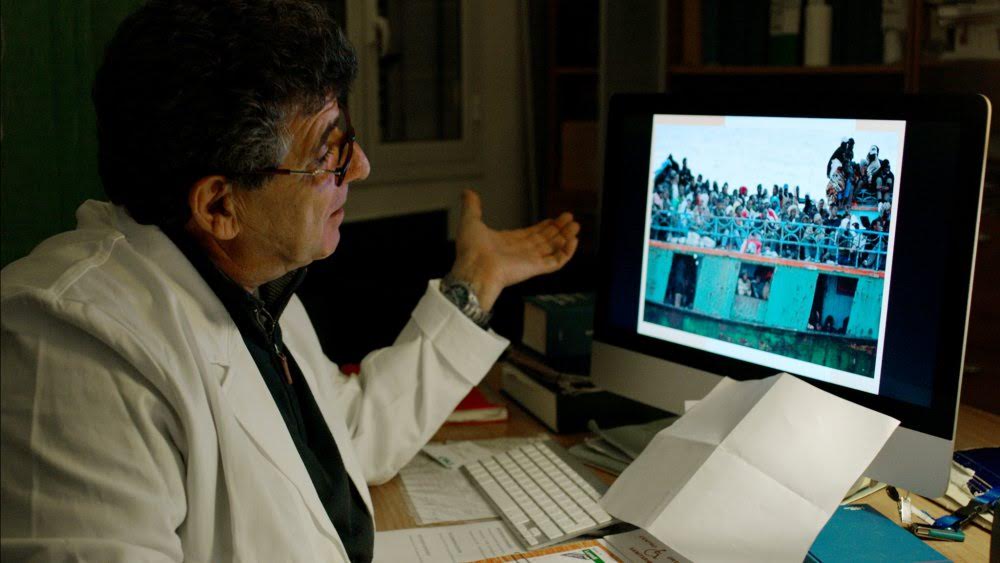 Samuele is often seen outdoors with a pal, practicing his hand-made slingshot, aiming at cacti and tries to row a boat to become like seafaring father. His routines are hindered by a lazy eye and breathing difficulties. The inherent sadness and the uneasy undertones, surrounding the boy’s life, are captured in the most humanistic way possible. Since “Fire At Sea” is a part docu-drama, one might anticipate some connection between Samuele and the asylum seekers. But, Rosi doesn’t go for such elaborate, artificial staging. In an interview, Rosi comments “I have a very strong boy portraying the main character and doing a great job of being him in every moment…….I could have brought him to the center and shown how these kids interact with the little kids coming from Africa, but this never happens in reality, so I would have felt completely hypocritical doing something staged like that.” There would definitely be ethical debates regarding the way Rosi incorporated the images of suffering refugees into the documentary. I don’t think Rosi’s camera exploited or insensitively portrayed the hardships & death. In fact, those images continue to trouble our conscience more than the entire media coverage of the issue.

Rosi’s approach could be accused as being passive as he doesn’t make any strong political statement. I just felt that there’s no need for indignant words, when you viscerally  see distressing images of dehydrated, dying persons being dragged off from overloaded boats. There’s no need for crisis explanation, when you hear a survivor’s haunting poem, chronicling the journey made from Nigeria to Sahara desert to Libyan prison to the sea. There’s no requirement for the sociopolitical perspective, when the camera focuses on traumatized looks of the parched human faces. Viewers might think that Rosi must have chosen a refugee subject to counter the world view of Samuele and the islanders. But, as Rosi comments it was very hard to forge a connection with a terrified refugee, let alone with a camera. The aesthetics of the documentary is certainly different from the usual captured footage films. There’s none of the shaky shots as Rosi prefers impeccably crafted compositions. Even the brief trip made by the refugees in the small rescuing boats — the occupants covered by big plastic covers – is shot in a precise manner, commanding our full attention.

In “Fire At Sea” aka “Fuoco Ammare” (115 minutes), Gianfranco Rosi uses the language of cinema to reinforce a tranquil as well as a turbulent reality. His images are a lament for the sufferings of fellow humans, concealed from our collective conscience. This documentary/docu-drama contemplates a desensitized tragedy through an unforgettable, humanistic perspective.

Fire At Sea [2016] — An Elegiac Reflection on the Unimaginable Agony