Burning Patience (2022): Romance is a genre that I have often observed people either loving or hating. Some find the fantasy elusive, while the same elusiveness makes some others cherish it. Often poets, artists, and other mental gymnasts spend their days and nights professing their love of love. ‘Burning Patience’ is a story borne out of similar minds. The movie is adapted from Antonio Skármeta’s book of the same name. We witness a story of two lovers who fall in love with each other due to their love for poetry and, more specifically, metaphors. They happen to live in the town of Pablo Neruda, one of the most revered poets of all time.

So, this element of similar interest comes into play when Mario (Andrew Bargsted) and Beatriz (Vivianne Dietz). Mario comes from a family of fishermen, which makes them expect him to follow in their footsteps. He, however, denounces this responsibility to rather follow some other path. Although not outrightly rebellious, an act of rebellion is committed by him – which makes him feel freer. In the future, poetry serves him as an element of a rebel against reason. Due to the advantage of having a bicycle, he becomes a mailman for his town and, while working on his routes, meets Neruda himself (played by Claudio Arredondo). He revels in joy by the sheer fact of being able to meet this iconic poet quite often. 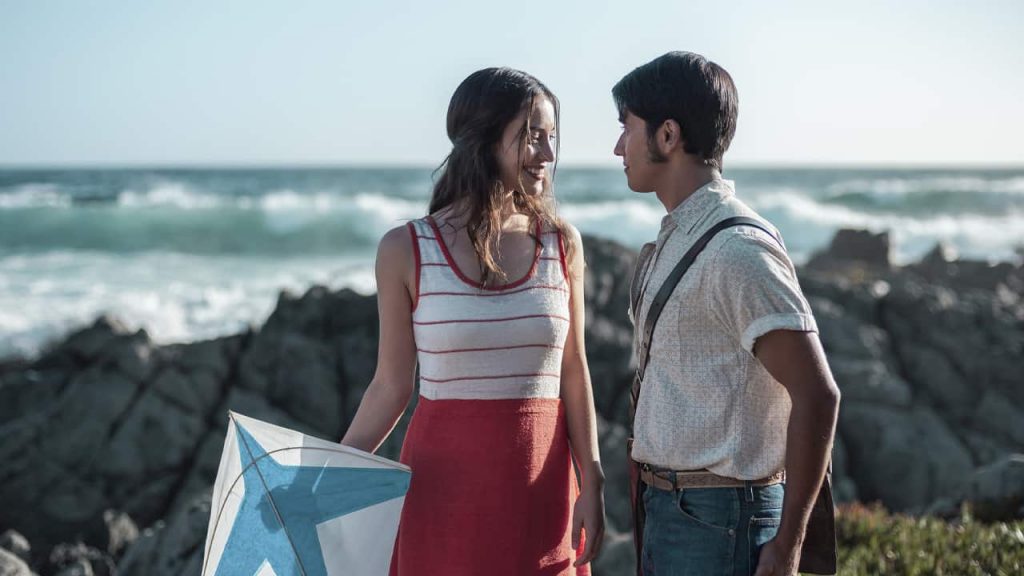 Around the same time, Mario comes across a beautiful woman named Beatriz and gets instantly charmed by her presence. Despite not having even shared a word of communication, he falls head over hills for her. She perhaps notices his awkward apprehension, and when he asks her for her name, she also gets butterflies in her stomach. Their gushy romance happens in scenic alleys, picturesque Chilean architecture, and the wide expanse of the neighboring water body. The camera showcases their romance in an irresistible way due to these aspects’ mere gorgeousness. With the same, the film sets a certain tonality that is too hard to look away from.

The eye of the cinematographer Maura Morales Bergmann and her team get all the credit for making it that way. At one moment, the camera shows Mario gleefully heading to meet his love, and the very next moment, it shows his insignificance by pushing way back to an intensely wide shot. The movie utilizes this way of shooting more than once and still manages to convey the significance of his naïve, poetic desire in a heartfelt manner every single time. The pastel-toned landscapes create a swoon-worthy color palette, which becomes the highlight of the movie

The work by the film’s sound department makes us feel the calm, the passion, and all the other emotions by complementing its alluring frames. You sense the overwhelming nature of Mario and Beatriz’s passion for each other due to the same commendable work. While the narration swoops you in with its charm, the narrative showcases the two lovers becoming fond of each other due to their mutual love for poetry. While Neruda recites one of his poems, Mario’s mind goes right to the thoughts of Beatriz. Their romance blooms over the period, and while working for her mother, she makes up time for sweet exchanges with this lover of hers.

Having felt the brunt of a lover like Mario herself, the mother does not want Beatriz to go down the same slippery path. With his unattractive job as a mailman with meager pay, Mario seems to be the kind of her past lover – who make you fall in love with the magic but never commit to the responsibilities that come along with love. After all, love is not enough in itself. While she opposes their companionship, Neruda becomes the pillar that Mario depends on as a support system. When this idealist poet uses his popularity to gain support for the presidential candidate of his choice, Mario uses his words to impress Beatriz. She gets saddened seeing him disrespect the very aspect that made them close.

Is poetry just for the poet or the ones who give him recognition – the ones who find joy in it? Mario muses over it. Is it not just a way of expression? Who owns art – the ones who birth it or the ones who find joy in it? The movie keeps presenting these questions while never being outrightly about these ruminations. The metaphors become a way for Mario & Beatriz to express their desire for each other. The script navigates the nature of metaphors and muses over whether it is a shield from a thought of a reason. These musings get packed in a generic narrative of romance that is evocative, more so due to the stylistic aspects of narration.

The Marriage App (2022): Netflix New Rom-com With A Tech Twist Mostly Works To A Certain Extent