Kesari (2020) gave me the feeling that Gully Boy did back when it was released. It works largely on the emotional front. Just like the Hindi blockbuster, it is thoroughly engaging. And it is also a motivational tale of a young man trying to get beyond all the odds – without the support from his father. This young man (a wrestler in this case) belongs to an underprivileged family and tries to do something that is unconventional according to the elders. In short, he tries to dream big – a luxury that someone like him can’t afford – just like how Murad does in Gully Boy.

But besides the thematic similarities, one thing that struck me was how both the narratives feel like an outsider’s perspective into the inside-worlds – of how a socio-political knowledge and a desire to comment leads both the directors to create these emotionally turbulent pieces of celluloid. Both Sujay and Zoya share a strong intrigue for the respective worlds and present it with the required honesty and respect towards them. None of them turn out to be poverty-porn.

In Kesari, Virat Madke plays the protagonist – Balram Jadhav, a 20-something young and macho guy who is devoted to wrestling.  Balram plays rookie tournaments in his village, against the opponents that he can defeat merely by his charisma. After all, as a quote from the film suggests – a sport is more about the character of a player than about the techniques or a strong physique. But Balram’s ‘character’ in this case is limited to his small town and stuck in the cases of hooliganism. And besides that, he doesn’t have the required ‘want’ – a strong desire in order to reach his complete potential. Why would anyone have that when everything is easily available without having to take any actual effort? The comfort- something that a lot of millennials have trouble in abandoning.

Mahesh Manjrekar’s character comes to make Balram realize the same. The actor-director plays a washed-up wrestler- Vastad Mehman, who is so long past his days of glory that hardly anyone can recall him being a wrestler. And just like how a motivational speaker comes from a place of being an absolute failure; Mehman’s character motivates and helps Balram to become more than just a technical champion. He makes this young chap sweat, to work tirelessly – in order to make him realize a not-so-unpredictable moral lesson about hard work. He ignites that ‘want’ in him and tries to make him more than just another dumb-athlete. He makes him put his brain into work. 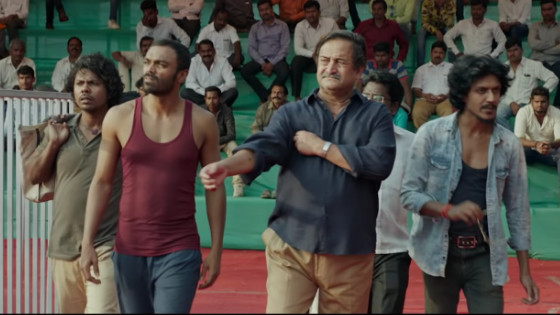 And while the narrative hinders around the largely overdone formulas of the motivational sports-dramas, there is genuine emotion in it constantly making me keep faith in its storytelling. As aforementioned, the film makes one fall in love with the brain and logic behind the sport. You enjoy the wrestling not just because of the careful handling of lights and camera-movements, but for how the film slowly builds this interest in viewers towards the logic than a spectacle.

Kesari also offers an interesting perspective while making a macho wrestler wash clothes – a task that is often assigned to women. While the task is for Balram to improve his grip, it makes this simple gender-barrier a little shorter. Be it this or the underlying political subtexts (like a Muslim person being reminded of the ‘favor’ done by the elites from the village for letting him stay), these little details are very well-executed.

But these issues never reach any defining conclusion, nor do they result in any satisfying proceeding. Perhaps that would have given Kesari a much-needed gravitas- since the film seems more comfortable in subtly pulling these punches. And while it does wonders at such scenes, the transitions feel incredibly jarring – especially when Dahake tries to connect a dramatically heightened moment with a significantly subtler scene. Even the loopholes don’t bother as much as the jarring editing does.

Where the film still succeeds is its cinematic understanding. Sandeep Gn. Yadav’s cinematography is a clear highlight of Kesari. It is picturesque but never pointless. It ties exceptionally well and gives a neat spatial sense – be it a wide ocean or Balram’s small abode. Both these departments lend the hand towards making a richly atmospheric piece. It’s rare to find one in Marathi language-cinema and this gives one immense hope in the same direction.

And Kesari (2020) brings a brilliant young talent in the form of Virat Madke, who is just as promising as Vineet Kumar Singh from Mukkabaaz. His effortless performance makes the film watchable, even during its rudimentary scenes. And Mahesh Manjrekar is a puzzle that I will never be able to solve. Just like his impressive turn from Mard Ko Dard Nahi Hota, he keeps you glued to the screen and makes you feel his compassion towards the protagonist. If that is not masterful, I don’t know what is.

[Watch] I Know This Much Is True Teaser: Upcoming HBO Series Gives Pleasure of Double-Ruffalo

[Watch] Butt Boy Trailer: Outrageous absurd-comedy about a detective and a powerful butt