Throughout modern history, public perceptions towards addiction and narcotics have been reflected in cinema. Whether it is alcohol, cocaine, crack, marijuana, or the latest street name for Fentanyl, society and film have reacted differently throughout the decades to drug use and stories describing addiction.

For instance, in the late 19th century and early part of the 20th century, cocaine was not a demonized or controlled substance.

The Coca-Cola company now adamantly denies its inventor allegedly called for 5 ounces of coca leaf per gallon of syrup—about nine milligrams per glass—in the preparation of the drink. But, the rumor persists.

Cocaine’s reputation was damaged by:

● Racist rumors about its impact on the behavior of African-Americans in the early 20th century.
● Claims that it made white women susceptible to white slavery.
● Public outcry by clergy and politicians.

Before this, cocaine was an ingredient in many prescriptions and over-the-counter drugs. Public acceptance of cocaine use is demonstrated in early films where drug users are either portrayed as comic relief or as people who became superhuman when they inadvertently consumed it.

Addiction Depiction in the Silent Era

D.W. Griffith was a devout evangelical who may have been influenced by accusations of Coca Cola’s intoxicating ingredient when he made the short film For His Son (1912).

The story is about a doctor, who wants to seem successful to his son. He creates a successful soft drink which contains cocaine. Despite knowing that people are becoming addicted to the drink, he continues to enjoy the success of the product and his son’s admiration. Unfortunately, the son he is willing to do anything to impress becomes a victim of the drink his father brazenly sold to others.

The 1916 film, The Mystery of the Leaping Fish did a comedic sendoff of the well-known super-sleuth and occasional cocaine user Sherlock Holmes, This Pre-Code movie had lead actor Douglas Fairbanks wildly consuming cocaine throughout the movie while in hot pursuit of a gang of drug smugglers. These two films show the sharp contrast of opinions about drug use during the period. 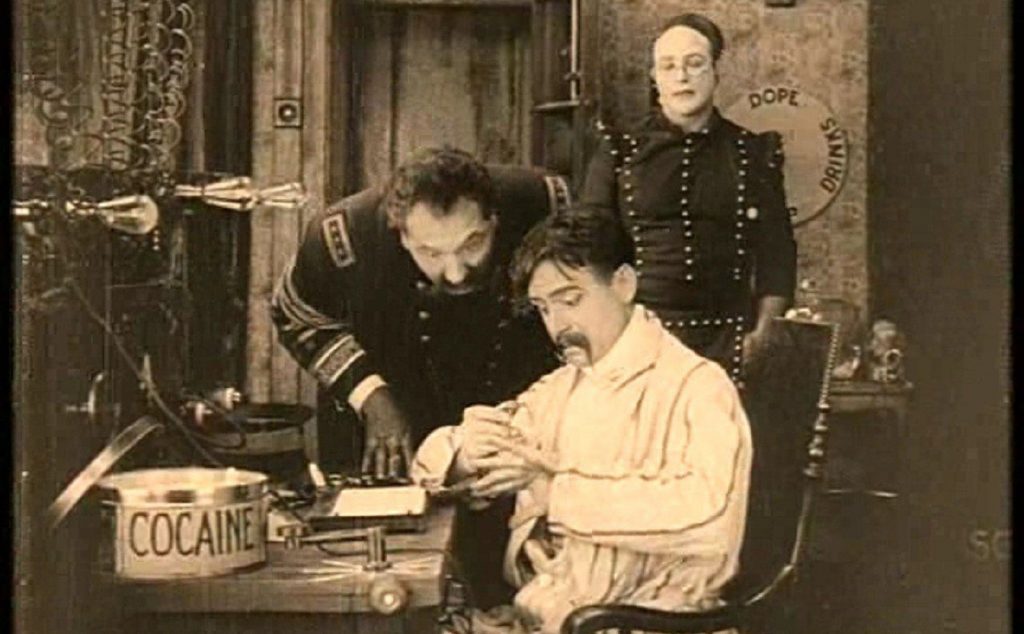 The years between 1930 and 1950 marked the Production Code or Hays Code era in Hollywood. It was named for Will Hays, the devout Presbyterian head of the Motion Picture Producers and Distributors of America. Appalled by the anything-goes silent era—which was rife with risque and controversial films and the scandalous antics of some movie stars—and prompted by widespread criticism directed at the Hollywood film industry by politicians, religious leaders, and concerned citizens, the code established a rigid set of rules for film studios.

Strict adherence to the Hays Code was mandatory so it’s surprising that Charlie Chaplain’s Modern Times (1936) got away with its comedic story about a hapless stooge who unwittingly consumes cocaine and then develops super-strength.

More common during the code era were films that demonized and sensationalized drug use, such as Reefer Madness (1936) or Marihuana: Weed with Roots in Hell (also 1936). The demonizing of marijuana and the wild, over-the-top performances are viewed today as high comedy, but at the time these were serious films aimed at discouraging marijuana use. It was branded as a drug of the lower classes, minorities, and degenerates.

Politicians and other leaders saw the film as a way to influence the behavior of people. So, exploitative, over-the-top, anti-drug movies were de rigueur during the time.

In the early 20th century, drug addiction wasn’t considered a disease the way it is today. During this period, people who were addicted to narcotics were considered weak-willed and of low moral character. There is little sympathy displayed in roles depicting them.

The next era that affected the way addiction and drug use were depicted in films was the period that followed the Hays Code. Released from the Code’s restrictions, films began to become more permissive.

● The Man With The Golden Arm (1955) painted a compassionate picture of a recovering addict struggling to stay clean and sober.

Addiction was recognized as a disease in 1956 by the American Medical Association. The result was a more humane and sympathetic treatment of characters addicted to drugs and alcohol in films. 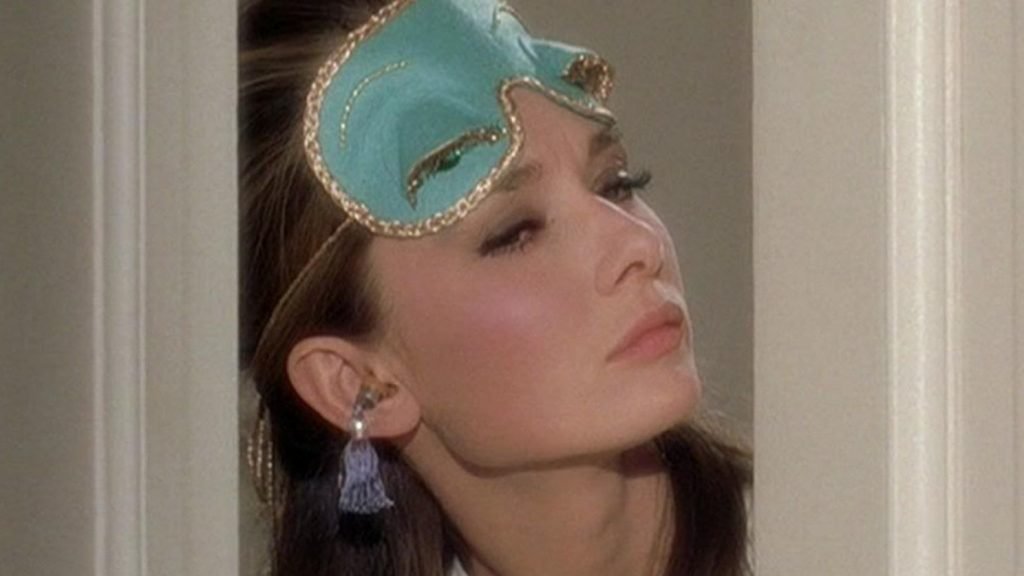 ● In 1961’s Breakfast at Tiffany’s, in which Hollywood’s princess Audrey Hepburn’s Holly Golightly unwittingly acts as a messenger for a drug dealer.

● The 1970s era actually began in 1969 with the counterculture movie, Easy Rider, a film that depicted drug use and drug-dealing by the film’s protagonists as acceptable. Characters who weren’t depicted as either part of or sympathetic to the counterculture ethos were portrayed as the antagonists.

● Other films brought continued sympathy for those caught in the throes of addiction. The Panic in Needle Park (1971) depicts a romance between two likable drug addicts that takes a dark turn when their addiction completely overtakes them. Far from glamorizing addition, it is a frank and honest portrayal of how addiction can change decent and likable people into those who will do anything to continue their addiction.

The 1980s brought a shift in public perception once more and the beginning of the Just Say No Era. Films during this period replaced the sympathetic addicts of the previous decade with surreal sensationalized films like Altered States (1980). The film showed the dark fantastic results of a scientist’s foray into hallucinogenic drugs. Films like Sid and Nancy (1986) and Drugstore Cowboy (1989) were over-the-top films that rejected realism to make a more dramatic anti-drug statement.

By the 1990s, any “cool” association with cocaine and the sophisticated elite had disappeared and been replaced with the devastating visual effects of the crack epidemic. Post-crack era films began to move beyond the tiny microcosm of drug addicts and the problems addictions caused them into examining the impact on the whole community.

● New Jack City (1991) chronicles the rise and fall of crack cocaine and a drug dealer in an inner-city community, examining the impact of addiction on the addict, family members, community members, dealers, and law enforcement.

● The Basketball Diaries (1995) and Requiem for a Dream (2000) presented realistic depictions on the devastating effect drugs can have on the lives of people who unwittingly fall into the throes of addiction.
Meanwhile, hallucinogens managed to extricate themselves from the nightmarish, surreal landscape of horror films to comedic fantasies such as The Big Lebowski (1998). 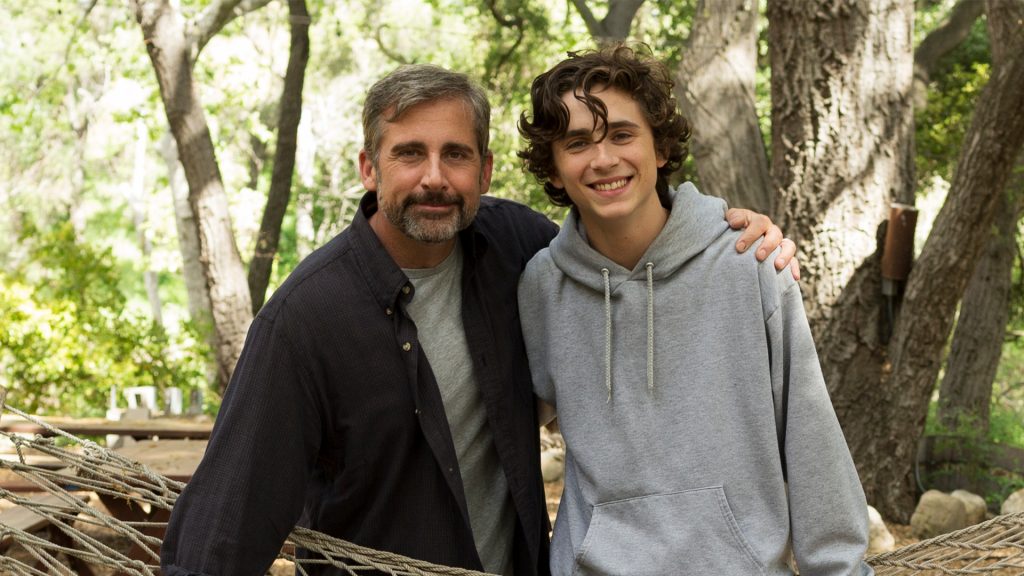 As we struggle to resolve the current, devastating opiate crisis, one wonders what if any changes this will have on the depiction of addiction in upcoming films. Will a street name for fentanyl be used to inspire the imagination of filmmakers for yet another iteration of drug addiction in films?

Last year’s Beautiful Boy and Ben Is Back suggest that, now that everyone knows addiction is a disease and not a show of weakness, we can expect more sympathetic treatment of people who are addicted to opiates, but also a realistic depiction that a tragic outcome is likely unless they seek detox and treatment.