Home»Reviews»Overwhelm The Sky (2019): A Good Film That Has Its Moments
Reviews

Overwhelm the sky (2019), written and directed by Daniel Kremer is an existential film throughout. However, over its 174-minute duration, one can expect moments that make them think that this is a murder mystery. I love the usage of film noir techniques that work wonders in aiding this particular thought process as one watches it. The Dutch tilt makes frequent appearances in dialogue scenes.http://www.highonfilms.com/the-15-best-coming-of-age-films-of-2019/

At these times ‘Overwhelm the Sky’ seems like a psychological drama where Edgar Huntley (Alexander Hero) questions his sanity. The beats combined with the edits and the expressions of Alexander Hero’s face here piqued my interest. What is up with him? What is happening? What exactly is this film?

Overwhelm the Sky is adapted from Chris Brockden Brown’s 1799 novel Edgar Huntley or Memoirs of a sleepwalker. (Well… that’s ruined everything. It’s tough to avoid giving it away. But it’s quite easy to spot it when you watch Overwhelm the Sky)

The one thing with black and white films is that one needs to question the motive behind it. Is it just to be different? The black and white here is just mesmerizing. The monochromatic shots add that edge to this murder mystery and even enhances the protagonist’s inner psychological conflict. There is a beautiful shot by cinematographer Aaron Hollander showcasing chiaroscuro lighting. Here Edgar Huntley’s face is the only source of light in the frame consisting of a dark background. This character is the central figure around which Overwhelm the Sky revolves.http://www.highonfilms.com/the-15-best-coming-of-age-films-of-2019/

He is a radio presenter who has left Philadelphia on the East Coast and is now in San Francisco on the West Coast. However, before he can arrive his fiancee’s brother/ his best friend Neil is found murdered. The investigation is closed, but Edgar remains obsessive and frequents the spot regularly. 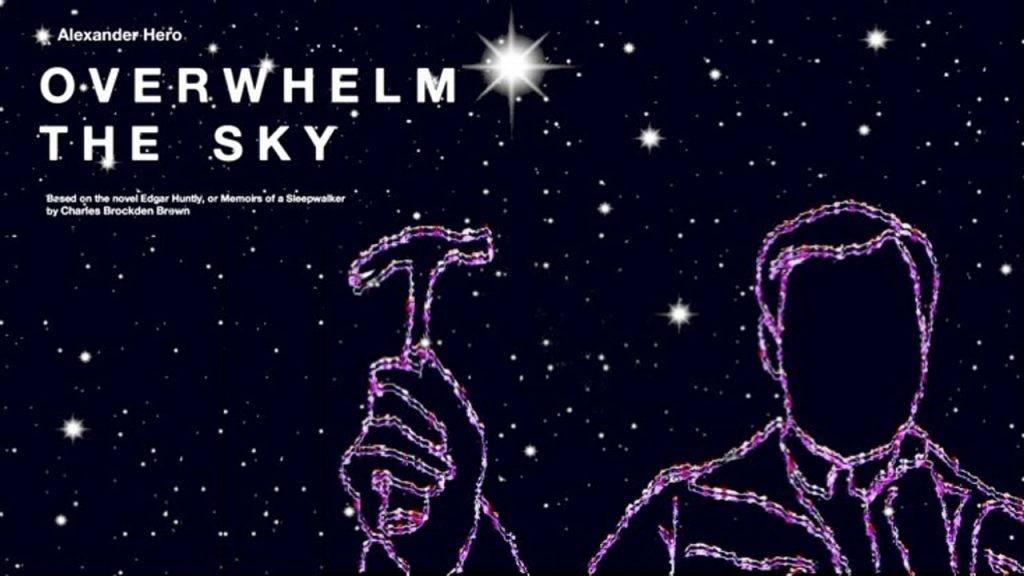 This along with snippets of his daily activities in the film lead you to draw multiple conclusions about the character and whether everything is as it seems. This is achieved by some beautiful edits by Charles Thackeray, amazing camera movements and shots that match with introspective comments made in a traditional format of communication that Edgar and his sister Faye strive to maintain in the present day.

The film is long.. I have mentioned the run time and Overwhelm the Sky’s Overture and Entr’acte most certainly did not help matters there. The moment I saw the overture flash on screen I wondered why the start credits weren’t appearing throughout the first 3 minutes.

It was quite a challenge to not switch this off as forwarding wouldn’t be right in case you miss something. And then the start credits appeared on screen later. Like why didn’t they combine it…? They could have had the film credits on screen akin to Nosferatu’s Overture which had the haunting music accompanying it to create the mood for the audience.http://www.highonfilms.com/the-15-best-coming-of-age-films-of-2019/

Overwhelm the Sky served as a test to my patience levels in not hitting the fast forward button. Is the movie going to be this slow? Now I did not know what the word entr’acte meant and had to google it. Kramer knew his film was long and presented it to allow the audience to get a break. Entr’acte is the overture of the second half and I faced another three minutes of looking at a screen with nothing except this one word

I get why this was done in this manner, as Kremer probably intended to set a tone for the film and did not wish for that tone to waver thanks to the interval. But it did not work for me. The music could have played in the background had a scene requiring such music been written into the commencement of both the first as well as the second half of overwhelming the sky (2019).

Costa Dafnis’ background score is something that will stick with the audience. It showed us that it will be slow, reflective and a few beats will serve as uplifting and inspirational. This kicks in when the title of the film is mentioned by one of the central characters to Edgar.

I mentioned how my interest was piqued at certain points of the film. But unfortunately, the engaging tempo built through a few sequences fizzles out as multiple scenes seem stretched and can make one sleep. The problem, however, is that Kremer has tried to be too artsy. There are just so many unnecessary shots that just increase its length. That one with the rippling currents of water to show inner conflict is so done.http://www.highonfilms.com/the-15-best-coming-of-age-films-of-2019/

Overwhelm the sky (2019) is a good film that has its moments and would be appreciated by a niche festival audience. I kind of wish that the film was shorter, crisper and maintained it’s tempo throughout.