A Decade On: This series is a look back at the films of debatably one of the seminal years for cinema in this millennium, 2007. In my mid-teens, this year was one that contributed to my budding cinephilia and directed me to some of the best works of the greatest filmmakers of this generation, which then lead me further back in cinema history to the gateway films that firmly established my love of films to this day. A decade on, 2007 is still one of the most important and relevant years in my life as a film-lover. 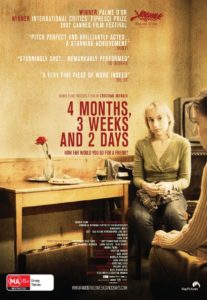 Almost exactly a decade ago, “4 Months, 3 Weeks and 2 Days” won the Palme d’Or at the Cannes Film Festival, the first Romanian film to do so. It really isn’t too hard to see why this film was awarded this prize, along with numerous other wins and nominations (including the Golden Globe for Best Foreign Film), as this incredibly troubling story is told almost in real time, often through long laborious takes and scenes that can last over 20 minutes, making this an absorbing experience for what is a harrowing and uncomfortable subject matter.

The story is simple: a woman helps her friend get an abortion with a doctor, taking place in 1987’s Romania where the act was highly illegal. The first third of the film where the abortion is being organized and prepared feels very procedural due to how carefully secretive it must be. The doctor gives us plenty of information about how it works in terms of legality, mentioning worryingly that a fetus past five months aborted counts not as abortion, but murder, and he can face five to ten years in prison.

Neorealism in cinema has been quite popular in the arthouse and independent scenes for decades and film movements now, but there’s still something about this film that makes its own brand of neorealism feels so incredibly fresh in a subtle and unnoticeable way. Given the privacy the characters must give to this illegal operation, most of the dialogue is spoken in hushed tones, making the characters sound almost monotonous, which recollects the reduced acting style from the films of Robert Bresson, who used minimalism to get to the essence of his films. With this hushed dialogue spoken with not much movement from the characters and performed within very long and often static shots, it renders this disturbing story in a more involving way, rather than turning it into a brutal visceral experience.

The films in competition at the Cannes of 2007 sure did indicate what a great year it was going to be (some of which will appear in future articles of this series). Some of these films are so great, they’re arguably better than this film that took the Palme d’Or for the year, but I can see why. If you are a real cinema snob, you’ll often dismiss the Palme d’Or winners just like any other big prize winners in the film ceremonies. Palme d’Or winning films like “Dheepan” and “I, Daniel Blake” prove that good, but not great films pick up this prize, as Cannes tend to award their top gong to more socio-politically conscious efforts. This doesn’t always happen, but it did in 2007. Although “4 Months” may not be quite the exhilarating film as some of its in-competition contemporaries, it is indeed a great film, not just a good film.

I saw this film perhaps two years after its release, around the time I was first gorging on foreign films, on YouTube separated into 10 different videos because YouTube could not have videos longer than 10 minutes (does anyone else remember watching films in this horribly fractured way?). Enjoy wouldn’t be the right word for how I felt about it, but I was completely taken by the film. I caught it again on SBS (an Australian TV channel that plays its share of foreign films) a couple years later and was enthralled again, and having watched it a third time recently, it goes to show how such an uncomfortable film can have such rewatchability. It’s delicate, yet the uneasy style of how this film has been made that makes it quite the experience, one that feels very alive and real, as if it’s occurring right before you rather than on a screen. Hopefully, a decade on, 2017’s Palme d’Or winning “The Square” will have an equally powerful effect.