The Safdie brothers – Josh and Benny – specifically care about one thing in their films: the mood; the frenetic, unrelentingly intense, anxiety-inducing mood that’s punctuated with screaming matches and Altman-esque overlapping background dialogue. The stylistic tour into the gritty, crime-ridden chaotic urban world in fact makes us overlook the narrative contrivances, or the occasional implausible human behavior in their works. Uncut Gems (2019), the Safdie brothers’ recent and most expensive production to date, is no different. Moreover, it is to the directing duos’ credit that they don’t sacrifice even a little bit of their intimate style because of the presence of a Hollywood A-lister.

We know Adam Sandler could do better than Billy Madison (1995) or Click (2006). The roles he played in Punch-Drunk Love (2002), Reign Over Me (2007), The Meyerowitz Stories (2017) has time and again proved that Sandler can be particularly compelling when he chooses not to play terrible roles in bad movies. In Uncut Gems, Mr. Sandler disappears into his role, which is also one of the best fleshed-out characters in his career. Awkward, annoying yet transfixing, the actor proficiently delves into the narrative’s tightly wound dramatic aspects.

Uncut Gems (2019) is the directing brothers’ most personal project, next to their directorial debut Daddy Longlegs (2009). Blending in research material into their father’s work experience at Manhattan’s Diamond District, Josh and Benny finished the first draft of the story in 2009 and approached Adam Sandler for the lead role back in 2012. Yet only after the success of Good Time (2017) – and with Martin Scorsese getting onboard as the executive producer – the film smoothly rolled into production. The Safdie brothers’ vision is also further strengthened by Darius Khondji’s unvarnished detour into New York’s seedy underbelly plus Daniel Lopatin (aka Oneohtrix Point Never) zesty electronica score. 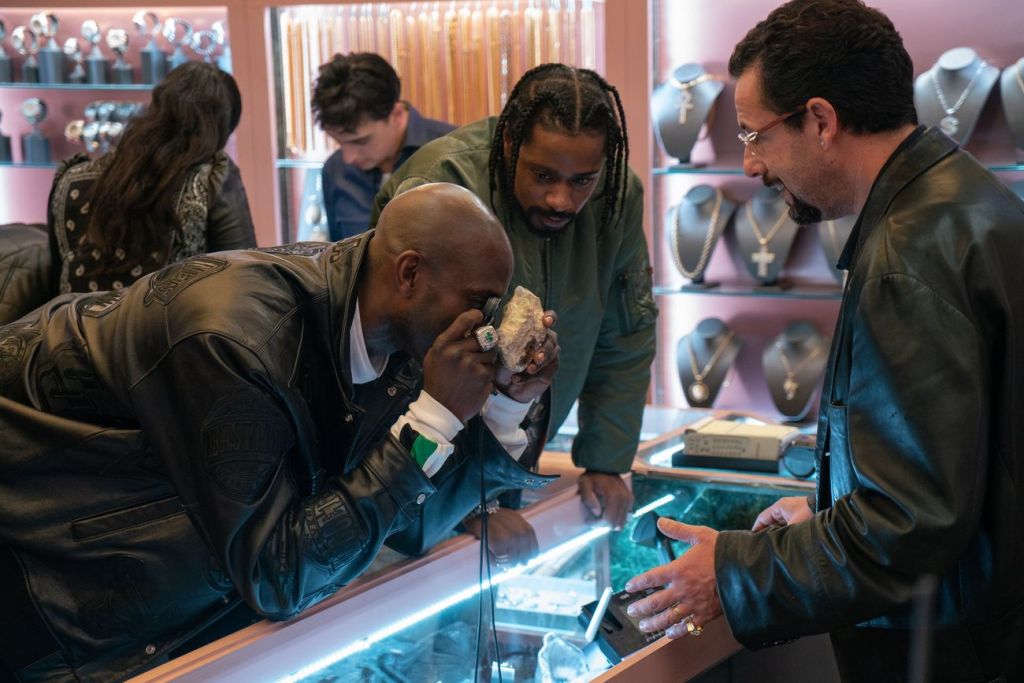 The film opens in Ethiopia, in 2010. Amidst the tone-setting cacophony of angry mine-workers (over a mining accident), two black laborers move into the depths of the mine to discover an oblong, gnarled rock studded with black opal. As the camera zooms-in to the begrimed stone, the rare opal seems to sparkle with rainbow-hued colors. From the image of a treasure found in the bowels of hell, it cuts to an actual bowel of a human. Its summer of 2012, and the black opal’s alleged future owner, Howard Ratner (Adam Sandler) is undergoing a colonoscopy. However, the prospect of getting colon cancer isn’t the only thing that petrifies this middle-aged dad and small-time Jewish jewelry dealer.

The fast-talking, leather-jacket-clad Howard is at a precarious financial situation with his gambling debts that have set off a frustrated creditor named Arno (Eric Bogosian) and his two angry heavies against him. Howard, however, seems to breathe a sigh of relief when he receives a package he was waiting to receive for months. Inside a shipment of fish is the illegally smuggled black opal. Excited by the big score and cognizing that the salvation is within reach, Howard shows off his prized rock to the Boston Celtics star Kevin Garnett (playing himself) shopping at his store, who is instantly bewitched. Kevin not only takes a superstitious shine to the sparkling rock but also wants to hold on to it for the game tonight. As collateral, Kevin gives his NBA championship ring. Then Howard, fueled by his addiction to gambling and risk-taking, makes one worst decision after another.

He gets caught in a trap of his own making. At home, things are far worse as his exasperated wife, Dinah (Idina Menzel) coerces Howard to go forward with their divorce plans (“I think you are the most annoying person you have met,” Dinah says to her husband). Howard’s dysfuctionality as a dad and husband is pretty evident when hired muscles lock him naked in his own car’s trunk. He has to phone his wife, attending their daughter’s high school play, to rescue him (a bit of dark humor in a persistently uncomfortable narrative). Howard is also not happy to see his cuddlesome mistress, Julia (Julia Fox) – also an employee at the jewelry store – in a night club’s bathroom flirting with the singer called as the Weeknd (also appearing as himself). But the emasculated, luckless jeweler believes in the deliverance that maybe just around the corner.

Characters driven (or addicted) to self-destruction have become the staple element of Safdie brothers’ flicks. The magic of course lies in the directors’ ability to conjure the well-organized chaos which despite the visual excesses (the frames oft filled with gaudy colors) takes time to look at the beauty and tragedy of any given moment. Furthermore, the atmosphere of unpleasantness and stress never feels like a sensory overload. Part of the reason for that also lies in the splendid performance of Adam Sandler, who remains very grounded and never alienates the viewers by turning Howard too buffoonish. If maybe not relatable, there’s something very recognizable in Howard’s feelings of powerlessness and forlornness mixed with the dispositional optimism of a gambler. Even when the plot points starts to get repetitive, it is Sandler’s vulnerability and Safdies’ mood-setting atmosphere that kept me engrossed.

The rough edges of the overwrought story do show through despite the bewitching style, and the deliberately placed deceptions interfere with character sketches (Lakeith Stanfield perfectly plays the hustler role, but what purpose does he serve apart from inciting viewers’ misjudgment?) I don’t know if this movie will be as memorable (in the coming decades) as the impeccably written 70s crime drama featuring dispirited sleaze-ball protagonists whom we sympathize at some level – for e.g. The Friends of Eddie Coyle (1973), Mean Streets (1973), The Killing of a Chinese Bookie (1976), Mikey and Nicky (1976). Nevertheless, Uncut Gems (135 minutes) takes us on a thrilling roller-coaster journey, vividly chronicling the avalanche of bad luck cascading upon its manic protagonist.

A Beautiful Day in the Neighborhood [2019] Review: A compassionate tale about acceptance