Inspired by the early serial-killers profiling efforts of real-life Special Agents John E. Douglas and Robert K. Ressler, Mindhunter stares into the abyss known as psychological profiling of serial killers, and the truth gleaned from this abyss offers a grim portrait of the human condition. The first episode of season 2 – elevated by David Fincher’s trademark visual panache – opens exactly where it left off (in 1979): Ford wakes up at a hospital due to the panic attack he suffered after Ed Kemper bear-hugs him; the other members of Behavioral Science Unit (BSU) and its overseer Robert Shepard (Cotter Smith) are tensely waiting for the results of OPR (Office of Professional Responsibility) investigation.

Since the BSU’s unique insights into criminal psychology is proved to yield concrete results, the unit is saved but Shepard is forced into retirement. He is replaced by the more open-minded and shrewd, Ted Gunn (Michael Cerveris). Gunn believes in the instincts and genius of Ford. At the same time, he separately meets with Bill and BSU’s in-house psychologist, Dr. Wendy Carr (Anna Torv) to give them the task of curbing Ford’s fixations.

Gunn provides Bill with the analogy of gelding a yearling without diminishing its ‘spark’. In return, Gunn provides bigger office space, promises new recruits, and most importantly BSU may be first on the scene, anywhere in the country, if serial-killing is suspected. Bill silently picks up Ford from the hospital, who are now advised to take pills for panic attacks. 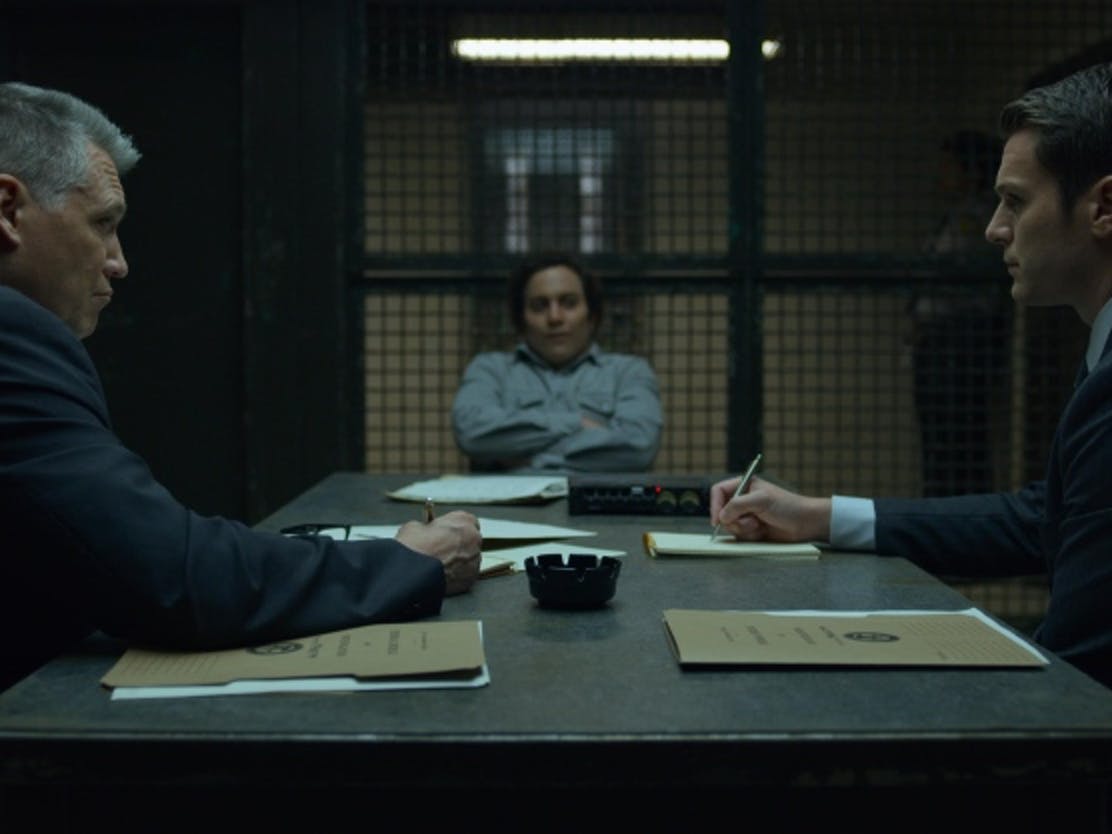 While Ford’s ingenious qualities are evident in the interviews, where he ably extracts all the grotesque fantasies and deeds of convicted serial-killers, his vulnerabilities and flaws are also perfectly laid out in the opening episode. Ford’s myopic nature couldn’t even understand the reason behind Shepard’s retirement, which is angrily explained by the man himself (“You are truly oblivious to the wreckage you leave in your wake”, Shepard censures him).

However, Ford is a bit sidelined in this season of Mindhunter as Bill Tench’s problems at home-front with his reticent, 7-year-old adopted son Brian (Zachary Scott Ross) becomes a significant sub-plot. Bill’s inability to balance between work and family also affects his marriage relationship with wife, Nancy (Stacey Rosa) chain-smoking in the patio.

Meanwhile, Wendy Carr gets the chance to prove what a great asset she could be to BSU. She and the unit’s fourth-wheel Gregg Smith (Joe Tuttle), the humourless and morally upright guy responsible for OPR’s investigation, decide to continue the interviews as Bill and Ford are busy with more pressing matters – more on that in a bit. Although, Gregg fumbles in a couple of interviews the duo does, Wendy puts up a tough exterior and does her best.

Moreover, Wendy has a better narrative arc than hers in the first season. She enters in a romantic relationship with Kay (Lauren Glazier), a free-spirited and divorced bartender. Of course, this romance kindles more conflicts within Wendy than give her comfort. At work, Gunn’s casual sexism puts Wendy under cringe-worthy situations. And since Bill is caught up with personal problems, Ford is paired-up with Jim Barney (Albert Jones), one of the short-listed Agents who may be Gregg’s replacement, for a couple of interviews with low-brow killers.

Bill, however, joins Ford to conduct interviews with two high-profile sociopaths: David Berkowitz aka Son of Sam (Oliver Cooper) and Charles Manson (Damon Herriman). Both these sequences are brilliantly staged (the sociopaths’ chilling confessions are juxtaposed with the mundane prison noises) and wonderfully acted. Herriman’s magnetic screen presence turns that brief encounter into one of the show’s best sequences (and this Andrew Dominik directed the episode – ep.5 – is despite the extended length is the season’s best one). Cameron Britton who played the scene-stealing Ed Kemper (dubbed, ‘Co-Ed Killer’) in the last season also makes a brief appearance.

BTK killer (Sonny Valicenti) once again appears on some of the prologue sequences. Bill Tench looks at the case files and crime scenes of BTK. He even meets the surviving brother of a victim. The young man named Kevin (Andrew Yackel) was shot in the face but has miraculously survived, whereas his sister, Kathryn was brutally killed. Bill is told by the local detective that Kevin after the incident doesn’t like to be looked at. Hence the two detectives sit in the front seat of a car, parked underneath the dark corner of a bridge.

What follows is an incredibly shot sequence where Kevin enters the back seat, but the focus is kept on Bill’s profile shot. Kevin slowly gives an account of what happened on that fateful day. The more he talks the more agitated he becomes, and we get to see Kevin in profile (in medium close-up), from outside the car window and covered in shadow. The sound of the train moving in the tracks overhead and the intensity of Kevin’s emotional experience leaves us with a gut-wrenching experience. Nevertheless, it’s not the pursuit of BTK killer that turns out to be the primary focus of season 2 (BTK was caught decades after the Kathryn’s murder). Ford and Bill are spear-head the investigations of Atlanta child murders.

Between 1979 and 1981, a bunch of African-American teenagers were killed in a cold-blooded manner. The political establishment of the time thought that panic brought over by the news of serial-killing would scare the business investment away. But the rate of abductions and killings increased to greater levels that Atlanta PD and mayor eventually brought in FBI. Bill and Ford start working with local authorities, but every promising lead turns up to nothing. Only the number of boys fished out of county rivers is on the rise. Ford comes up with a profile – African-American male, the early to late 20s, lives with his mother, owns a dog – and sticks by it, even though the local law and parents of the victims believe that the Klan is involved (since the Southern state has an ugly racist history).

One of the interesting aspects of Mindhunter is how the hunt for serial-killer doesn’t employ the usual thriller tropes. It details the grind involved in such work. Ford who seeks to understand the psychology of America’s most infamous psychopaths is baffled by the bureaucratic maze, its paper trails, and learns a thing or two about politics. Furthermore, the search for a monstrous murderer reveals the deeper social ills that allow such a person to use it to his advantage. Directors David Fincher, Andrew Dominik, and Carl Franklin stay away from extracting shock value from the killings.

The carefully selected shots and perspectives convey us the devastating nature of the crime without actually ‘showing’ it.  The narrative also never loses sight of the pain and anger felt by the victims’ families. It is fascinating to note how Ford’s first and last encounters with the mothers of murdered children are staged; both times Ford stands on the other side of the table, suggesting his inability to understand their plight.

Mindhunter unlike most of the serial-killer narrative doesn’t offer any catharsis. Even when the killer’s identity is revealed and he’s put behind bars, the feeling of everything-is-not-alright is deeply embedded into the narrative. Despite providing strong evidence that supports Ford’s theory of Atlanta child murderer’s profile, some of the grey areas in the case are duly acknowledged.

The denouement reflects what happens in reality: uncertainties remain the same, agony of the victims’ families are left unanswered while politicians and bureaucrats enjoy their brief spotlight, and of course dead will remain dead. Things unfold too smoothly at times, few character trajectories are very predictable (Dr. Wendy’s romantic relationship), and occasionally the symbolism and subtext seem a bit too much on-the-nose (especially Tench’s struggle to come to terms with his son’s action). Nevertheless, season 2 of Mindhunter remains a grimly fascinating and addictive drama that delves into the darkest corners of human psyche and society.