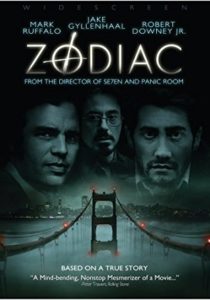 With the likes of his break-out film Se7en (1995) and his most recent serial-killer TV drama Mindhunter (2017), visionary director, masterful storyteller, and renowned perfectionist David Fincher is likely to become (or already has become) one of the most relevant figures in the filmmaking world of crime-drama.

Zodiac will be regarded as an essential classic of this genre, for three key reasons that make it stand out amongst its contemporaries (and the wealth of crime dramas throughout cinema history): its intensive attention to detail in portraying the investigation, the harshly realistic portrayal of the inconclusiveness of the case, and the CGI effects that enhance the whole story.

For just about its entire 158 minute run-time (163 for the superior director’s cut version), Zodiac is filled to the brim with all the details and all the events and all the leads that made up this case. This film really does put to shame the likes of true crime documentaries that plagued cable television, which are filled with desperately sensationalist cinema techniques to make the viewers feel on edge. Not only does Zodiac successfully get across this unease with so little, it likely manages to fit in more information than any documentary could do, all the while still feeling like a film with a story, a through-line, and characters that develop alongside (and because of) the investigation.

Fincher avoided making another Dirty Harry (1971), which was made about and during the height of the Zodiac Killer mania, and was a more clownishly action-orientated affair rather than the brooding and documentative film Zodiac ended up being thirty-six years later (which directly references Dirty Harry about mid-way through). Fincher claims All the President’s Men (1976) was the template for Zodiac, a film that managed to zip along with heavily dialogue-based scenes. More films based on true events need to follow in the footsteps of this film and Zodiac, by staying true to the real events while not over-dramatising it or making it too boring.

Although the quality is consistent throughout as the film mostly focuses on showing the vast and nuanced details of the case, for its first third, it plays out almost like a regular crime film because

of the grisly murders of the Zodiac Killer that it shows, as well as his infamous appearances in the newspaper (through haunting letters to the editor) and even his voice on TV. Crime drama conventions dictate that the film will build upon this over and over until the thrilling climax where the killer is confronted by the good guys. But in Zodiac, no such conclusion is made because that just wouldn’t be true to life at all. Instead, as the film moves on, the journalists and investigators who were initially hot on his trails eventually give up after years of following up leads and clues and ending up nowhere. It’s only cartoonist Robert Graysmith (Jake Gyllenhaal) whose infatuation with the killer has him on a vigilant pursuit to catch the killer, even at the detriment of his family’s safety.

The first time I saw this film (I’m guessing exactly a decade ago), I was impressed with how the second half of the film matched the intensity of the first half, and with how the case’s lack of activity had an effect on people who then decided to simply let the case go and no longer worry about it, apart from Graysmith. It felt like something totally new to me, and it was new to the world of cinema, and it’s a testament to Fincher and screenwriter James Vanderbilt (not to mention editor Angus Wall) for retaining interest throughout the film’s lengthy run-time and never letting the ball drop for a single second. It’s hard to make disinterestedness seem interesting on screen, which makes Zodiac a rare success.

What differentiates Zodiac from both its contemporaries and its ‘70s influences is its use of visual effects. Most Fincher films have far more CGI than we can even guess, sometimes having just as many visual effects shots as an action blockbuster film, and Zodiac features a whopping 200+ of them. The effects in Zodiac are sometimes unnoticeable, such as the blood effects in the murder sequences, composited back-drops, and a few reshot scenes. Some other effects are made to be noticed as visual effects set-pieces, such as the impressive shot of the Transamerica Pyramid being built, a clever way of establishing the time that has passed as well as the change in this San Francisco setting. Another impressive CG shot was a BEV of the cab driving through San Francisco listening to the reports of the Zodiac on the radio, just before the cabbie pulls up and is killed by the Zodiac himself. A shot like this makes me think of Fincher’s classic quote “people will say, “there are a million ways to shoot a scene”, but I don’t think so. I think there’re two, maybe. And the other one is wrong.” – this makes me wonder, for this unusual shot what the other way might’ve been to film it. 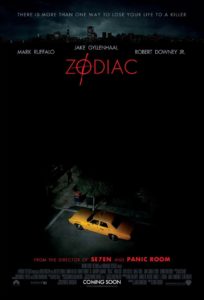 It shouldn’t be any surprise that Zodiac was highly praised upon release, reviewed positively left, right, and centre, and was apparently the third highest critically praised film of 2007 behind No Country for Old Men and There Will Be Blood (we’ll get to those later on in this series). Its box office success was decent, but it was the awards ceremonies that had forgotten about its incredible impact from the time of its release (March) to the end of the year, as its initial 2006 December release was postponed so that more time was given to an uncompromised Fincher to make some tweaks. Academy Awards, Golden Globes, BAFTAS, New York Circle Jerks, not a single nomination from any of them, not for Fincher’s adept handling of the case whilst portraying in an appropriately slick aesthetic, nor Vanderbilt’s enormously researched screenplay that still managed time to dig deep into the obsessions from the investigative characters.

But Fincher’s follow-up film next year, The Curious Case of Benjamin Button, was swamped with awards and end-of-year accolades (as it was released on Christmas) – even its pithy and nonsensically meaningless script was nominated for Best Adapted Screenplay at the Oscars, which means in comparison to Vanderbilt’s script, it must been a weaker year for awards contenders in 2008.

Trophies aside, Zodiac stands as a classic of the 21st century, one that was praised upon release, swiftly forgotten about, then soon enough reappraised for now close to a decade as one of Fincher’s best efforts, a daring and labyrinthine crime-drama that has redefined the genre, but whose new approach to the genre has not been rivalled or challenged by any contemporaries. Unless only thrilling and action-packed crime films entertain you, it’s not a film that’s easy to forget.