Once Upon a Small Town (K-drama), Season 1, Episode 8 Recap & Ending Explained: It’s a new day in Huidong, and people are busy with everyday life. The all-new episode of this romantic K-drama adds some new characters that twist the arc of the love triangle. Ji-yul has opened up with Ahn, and the duo spends more time with one another in this episode. At the same time, an old flame from Seoul changes the show’s track, making it more engaging with its comedy and romantic turn.

Here is a quick recap of the eighth episode of Netflix’s entertaining show as I break down what happens next. Spoiler alert, kindly read it at your discretion.

ONCE UPON A SMALL TOWN (K-DRAMA), SEASON 1, EPISODE 8 RECAP:

Episode 8 takes us to Ahn’s workstation, where she is gleefully pondering her conversation from the other night with Han Ji-yul. At the police station, when one of Ahn’s coworkers finds her lost in thoughts, he asks the head of the town police about her unusual mood.

In the previous episode, we saw that Ji-yul finally mustered up the courage to be less formal and more attentive to Ahn’s presence around him. After dropping Seon-dong back at his home safely, we see Ji-yul apologizing to her for being an arrogant person, not knowing who she was until he remembered they were close friends as kids. He also shared that she was the only good memory he had from that year they met.

Since it was pretty late in the night, Ji-yul brought his bike to offer her a lift back home. However, Ahn politely declined his ride but takes his bike to go home. She notices that Ji-yul has a sudden shift of energy and is more polite with her. It seems this particular incident is now very special for Ahn as she stands by his bicycle, grinning and reflecting on her conversation with him.

On the other hand, while doing a routine check-up of the cows, Ji-yul hears the conversation concerning the National Singing competition. The town women are discussing the incident at the council meeting where both the town heads got into a brawl. Ji-yul learns that Ahn somehow got caught up in the fight, and the head of the neighboring town said mean things about her.

While heading back to the hospital, Han Ji-yul is stopped by a hysterical woman who wants him to check on her pet dog. Officer Ahn and her co-working officer also join her. Since the woman’s mother lives in Gupyeong and her dog has suddenly fallen and can’t get up, they have called all the nearby veterinary hospitals, but no one is available. The officer explains to Ji-yul that he must immediately look into the matter since he is in town.

Gupyeong is about one hour’s drive from town, and the woman’s mother is 95; it would be impossible for her to drive to the hospital there. The officer suggests that he must go there to treat the ailing dog. Even though he can’t just leave his ongoing work here in Huidong, Officer Ahn stops him and asks if he can spare just two hours to treat the dog in need. Since she knows a shorter route to the town that will take 40 minutes, she can accompany him to the other village.

Ji-yul is more concerned about treating a pet dog that belongs to someone from Majeong. He asks why Ahn is not bothered by the woman who always sides with other women, ill-treating her. He points out that these women don’t blink before saying mean things but are always friendly to people when they need them. Without answering any of his worries, Ahn agrees to drive the truck. She comforts the woman, and both leave for the other town.

While driving, Ahn looks at Ji-yul and asks if he was worried for her. She tells him that he has changed a lot. He used to think about treating the animals without worrying about what will happen next. However, he has started to believe the opposite.

While talking to each other, Ji-yul realizes that he is one year older than Ahn, so he suggests that he would talk down to her from thereon. However, she disagrees with calling him Oppa (older brother), but he fears he never mentioned her calling him that. Upon reaching Gupyeong, they rush to treat Doldol. The dog’s owner, an older woman, thanks them and offers them fresh corn to eat on their way back home.

After treating him, the duo thinks they have overcome the hurdle; they quickly realize that the truck’s tire is flat. After learning their truck will take time to get repaired, both decide to spend the time in their hand doing things spontaneously. It, however, changes the day’s event as they spend an exciting day that helps them get to know more about each other.

After spending a rather adventurous time together, when they reach their town, Huidong – Ji-yul finds out that his girlfriend from Seoul has come to the village to visit him. Since Ahn has spent the whole day with him, the duos share awkwardness with the new addition in their chemistry. Ji-yul is also taken aback and grows very uncomfortable by the surprising gesture of his girlfriend. It seems like just when we expected things to shape better for both Ji-yul and Ahn, the new guest in the town made everything move back to square one.

The episode slowly unravels new details, and we learn that Ji-yul’s girlfriend Choi Min is his ex, who is desperate to get back together with the young doctor. Han Ji-yul doesn’t wish to be with her any longer and wants her to return home. However, Choi Min is adamant and has already planned her stay in the village for another week. She has found a place for herself and promises to give her best shot at their relationship this time. Even though Ji-yul’s intentions tell otherwise, his ex-girlfriend has vowed to win his heart at any cost.

ONCE UPON A SMALL TOWN (K-DRAMA), SEASON 1, EPISODE 8 ENDING, EXPLAINED: 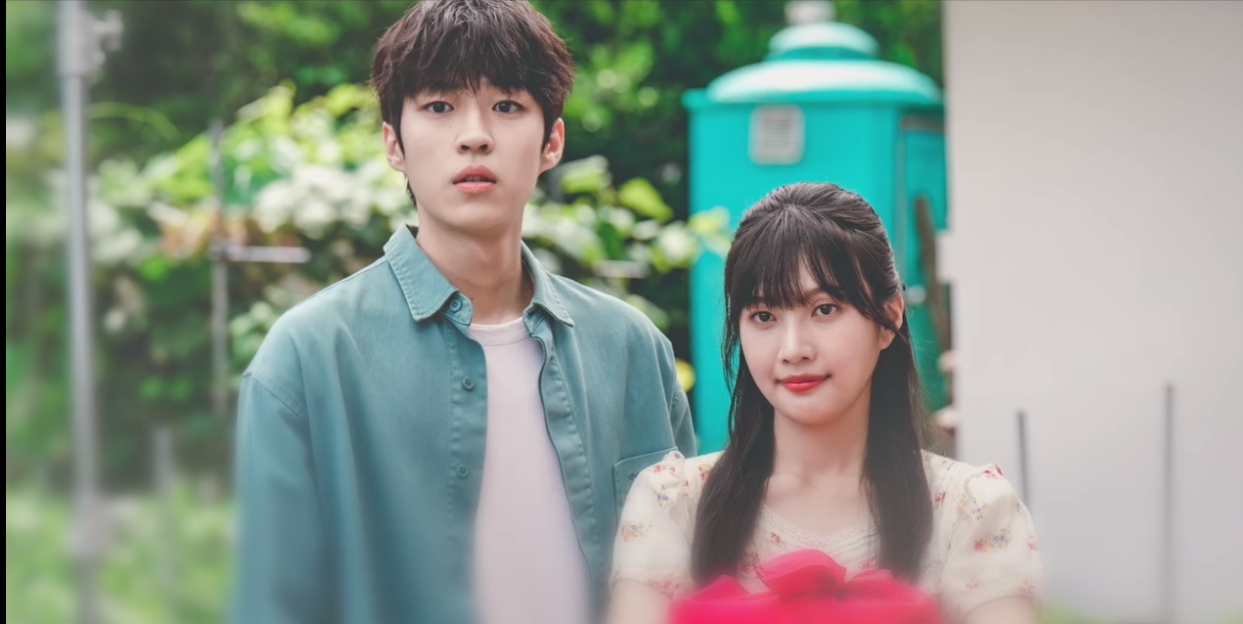 The show, at this point, gets tense and quirky as Choi Min is determined to stay at Ahn Ja-young’s place. It seems no one is pleased about this affair, and the townspeople have found a new purpose to deal with on their own. The women’s association group finds new ways to fill Ahn’s mind with unnecessary things about Ji-yul and his ex.

Uncomfortable details constantly pester the young police officer about the Seoul guest, which makes things upsetting for her. Sang Hye-on’s return from the city also adds more tension in this episode as he starts behaving even more oddly than his usual self. Whenever he comes across the couple, he starts acting as if he is Ahn’s boyfriend making the entire situation worse than it already is.

Episode 8 becomes more funny and enjoyable as we learn that Ji-yul’s friend from Seoul was left with no option but to accompany Choi Min to the village. While Ji-yul is not pleased with his ex-girlfriend’s impulses and decision to mend things, he is also a little mad that things are only getting worse instead of getting better. At one point, his friend suggests that he should not get angry, and tries to make him understand that his relationship with Choi Min did not crash or burn as he thinks, so he should consider her efforts.

Han Ji-yul’s friend also tries to make him see things through and tells him that his girlfriend did not break the relationship. Since she had to go to the States for work, she had to leave abruptly. Despite his friend trying to twist his mind about Min, Ji-yul understands well what needs to be done at this point.

In the meantime, we see Ahn and Sang Hye-on walking by the peach farm, discussing the new guests in the town. Soon Hye-on asks Ahn if she has thought about things they talked about after he confessed his love to her. Their conversation is interrupted when Nurungji (Ahn’s dog) runs away to play with Ji-yul down the road.

The three leads are in the same frame, as Ji-yul confesses that Choi Min is not his girlfriend. When it comes to his love life, he has no other person in his life at the moment. At the same time, Sang Hye-on is not okay with how things change after this. The episode ends with another confession impacting Ahn’s decision to choose between her crush and best friend who is in love with her.

Do Revenge Soundtrack: Every Song Featured in the Netflix movie