5 Films To Watch If You Like “See How They Run”

5 Movies Like ‘See How They Run’: With all the excitement around Glass Onion: A Knives Out Mystery (2022) prior to its Netflix release later this year, Tom George’s See How They Run (2022) dishes out a cozy mystery that promises to warm you up like a bowl of chicken soup for the soul. It chooses to be a parody of the classic whodunit mystery we typically associate with Agatha Christie books and looks inward for meta-commentary. If you are a fan of both these elements in cinema, you are bound to love this one.

The film opens in 1953, almost a decade after World War II ended. We are immediately introduced to an Agatha Christie play, The Mousetrap (1952), branded as a second-rate murder mystery by the American movie director, Leo Köpernick (played by Adrien Brody), that has been successfully drawing the audience to the theatre for hundred performances. Unfortunately, the initial narrator of the film, Köpernick, is murdered at the success party of this play, and now the Scotland Yard detectives – a war veteran with a limp, Inspector Stoppard (played by Sam Rockwell), and a young, inexperienced widow, Constable Stalker (played by Saoirse Ronan) – must find out who the killer is. It doesn’t help that everyone from the play’s crew loathed Köpernick. To garnish this hodgepodge, we are also promised the presence of the famous author herself, Agatha Christie. It speeds along the track, warning us time and again to not jump to conclusions, but can you help it when you have so many clues lying around? We are on the same boat as Constable Stalker till the very end.

It is a stylish whodunit that doesn’t hit the bull’s eye with its meta-mystery, but it comes quite close to it. An obvious Double Bill for this one would be Knives Out (2019), written and directed by Rian Johnson. In it, Detective Blanc (played by Daniel Craig) must find out the secrets behind the death of the aging mystery novelist, Harlan Thrombey (played by the late Cristopher Plummer). It boasts a star cast and a well-sharpened plot full of age-old murder mystery tropes, making it equally charming and entertaining to watch. Most importantly, Knives Out is a smart and subversive whodunit that turns the genre on its head.

Here’s a list of five murder mystery suggestions that will enjoy if you liked the film, See How They Run (2022). More like a warm-up exercise for your curiosity, these films have a few factors in common, including the backdrop of World War II in a western European or American setting, female detectives, and an Agatha Christie-inspired narrative or film adaptation. Most importantly, all these films make for a thoroughly entertaining watch! Happy Reading! 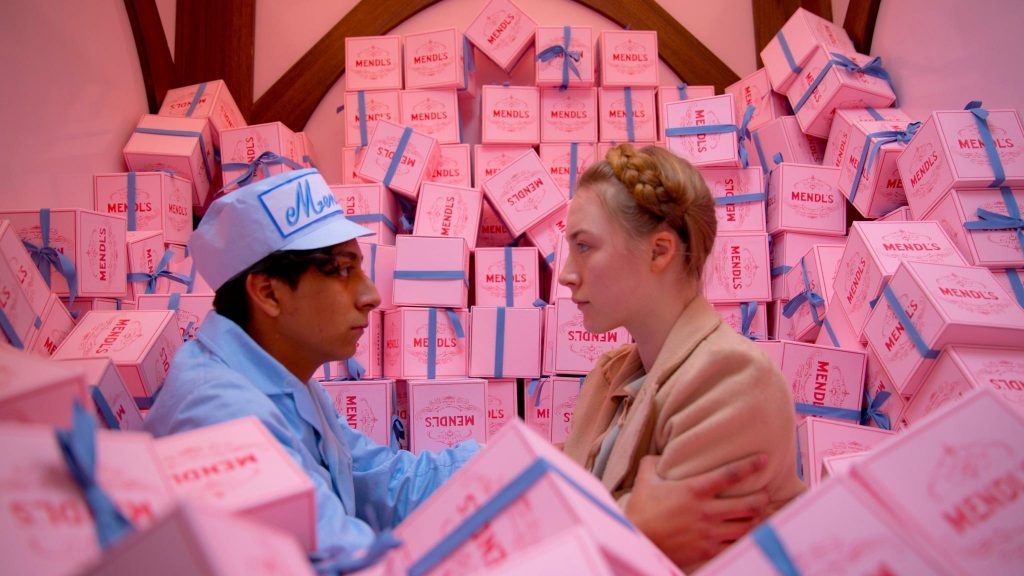 This is a charming eighth feature from the director, Wes Anderson, and an obvious rewatch for every time I want to feel comforted on a gloomy day. It subtly throws us into the middle of a well-layered whodunit while the spectacle of (dis-)orderly nostalgia transports us to a grand mansion that has now waned in its prestige.

This story within story within another story from 1932 recounts the time when Zero Moustafa (played by Tony Revolori) was newly appointed as a lobby boy at the Grand Budapest Hotel. The hotel’s concierge, Monsieur Gustave H. (played by Ralph Fiennes), was quite close to the old Madame D. (played by Tilda Swinton) when the latter’s mysterious death and the codicil to her will bequeathing a priceless masterpiece to Gustave raises eyebrows and weapons. The film jets around like a comic murder mystery against the backdrop of Europe’s sifting historical landscape.

That both Saorise Ronan and Adrien Brody star as important characters in both the films, whose narratives are dotted with a star cast, forms one of the superficial similarities between them. Although there are no direct references to World War II, there is a display of fascist emblems in the halls of the hotel, an unscrupulous power shows through the dramatic Zubrowkan invasion that hints at Fascism, and some of Zero’s black-and-white memories from the wartime. The orderliness of Anderson’s distinct visual grammar gives this film a peculiarly beautiful finish like ‘See How They Run’, which caricatures with parallels and split screens to replicate a similar tidiness. It is an oddball delight to watch the social dysfunctionality of Western Europe in the form of a warm hug. 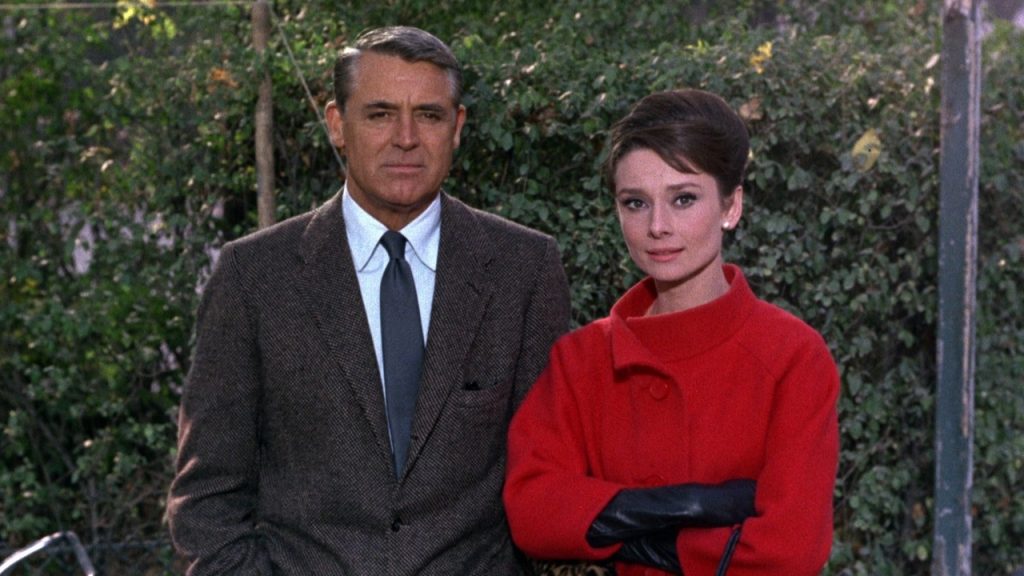 Directed by Stanley Donen, Charade brings together the best of both worlds – romantic comedy and murder mystery. This film erupts in true mayhem, in general, that takes the protagonists around on the streets of Paris in eccentric patterns, making this a kitschy whodunit dripping in high-end drama.

Regina Lampert (played by Audrey Hepburn) returns from her holiday in the French Alps to find that her husband, Charles, has been murdered. Charles had sold off all their belongings except a small travel bag. She soon learns that her husband may have stolen around $250000, and now she must find the money and save herself from three strange men and the US government following her around closely. For assistance, she has Peter (played by Cary Grant), who conveniently lies about his identity throughout the film.

Charade is a glamorous toast to the period of post-World War II in the west. Like in ‘See How They Run’ (where we are specifically looking at 1953), the war is still fresh in people’s minds. Lampert, dressed in her signature Givenchy dresses, is webbed in the affairs of her late husband and his associates from the wartime. The object of desire central to this mystery also links to the war. There’re no detectives involved in solving the mystery, except Lampert and Peter, who share a sparkling chemistry in this film. It is a classic most popularly renowned as “the best Hitchcock movie that Hitchcock never made.” 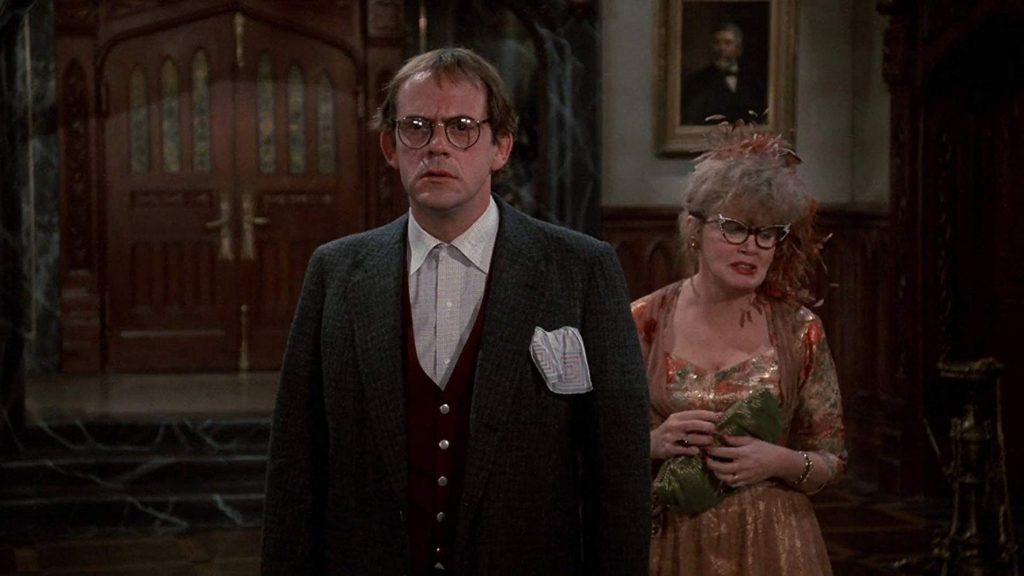 Directed by Jonathan Lynn, this film is inspired by the nature of the board game Cluedo designed by an Englishman, Anthony E. Pratt. It is stylish and funny in the manner of Mel Brooks comedies, keeping itself from tipping into slapstick comedy by the cleverness of the intricately well-planned and simultaneously stupid murders.

Six guests arrive at a New England mansion following an anonymous invitation for dinner. A seventh guest, Mr. Boddy ( played by Lee Ving), arrives and after a while, his apparent death leaves the guests and the butler, Wadsworth (played by Tim Curry), piecing clues to find the murderer. The film, Clue, has three possible endings arranged sequentially, if you can lay your hands on the right print, and seven suspects, making this a rare whodunit that leaves you feeling curious even after it has ended. Fun fact: There was a fourth ending as well, but it was discarded as not good enough by the director.

Full of quotable lines and characters in campy costumes, the film has gathered a cult following in the current years. Besides, each of the six suspects is given a pseudonym based on the color of the vehicle they arrive in. Its premise – a secluded mansion and a mysterious invitation – is very reminiscent of And Then There Were None (1939), a much-loved Christie novel that has found itself at the heart of several cinematic adaptations. In fact, See How They Run (2022) follows in the same footprints and leads us to the Christie mansion for its climax. ‘Clue’ is like a maze that keeps giving with every rewatch. If I say one word more about this film, I am bound to spoil it for you. Directed by Rituparno Ghosh, this Bengali-language detective mystery has its roots in Agatha Christie’s novel, The Mirror Crack’d from Side to Side (1962). It is a film like ‘See How they Run’ in its bringing together of Christie’s story and influence and scouring into the personal lives of movie stars to arrive at the cause of crime.

On the first day of the shooting of a film by an NRI producer, its lead actress, Kakoli (played by Kalyani Mandal), succumbs to death under mysterious circumstances. At the time of her death, only journalist Mallika Sen (played by Nandita Das), was present at the crime scene. Police investigation ensues and the dark past of each of the characters involved in this film comes to the limelight. Untangling these threads with superb deductive logic and expertise is Mallika’s aunt, Ranga Pishima (played by Raakhee), who ultimately solves the crime.

The film is mostly a faithful adaptation of the Christie story, recontextualized to fit the Tollywood film industry. Ghosh unfurls the story and each of his characters carefully, keeping the tension on a slow burner throughout the film. The character of Ranga Pishima also encapsulates the eloquence and patience of Miss Marple. It went on to win the National Award for the Best Feature film in Bengali in 2003. Ranga Pishima’s character was also supposed to be serialized for a television detective series. Unfortunately, Ghosh’s untimely death stalled those plans, and now we are left with a singular example of his brilliant understanding of the detective-mystery genre of filmmaking.

Related Content: 10 Films to Watch If You Liked Knives Out 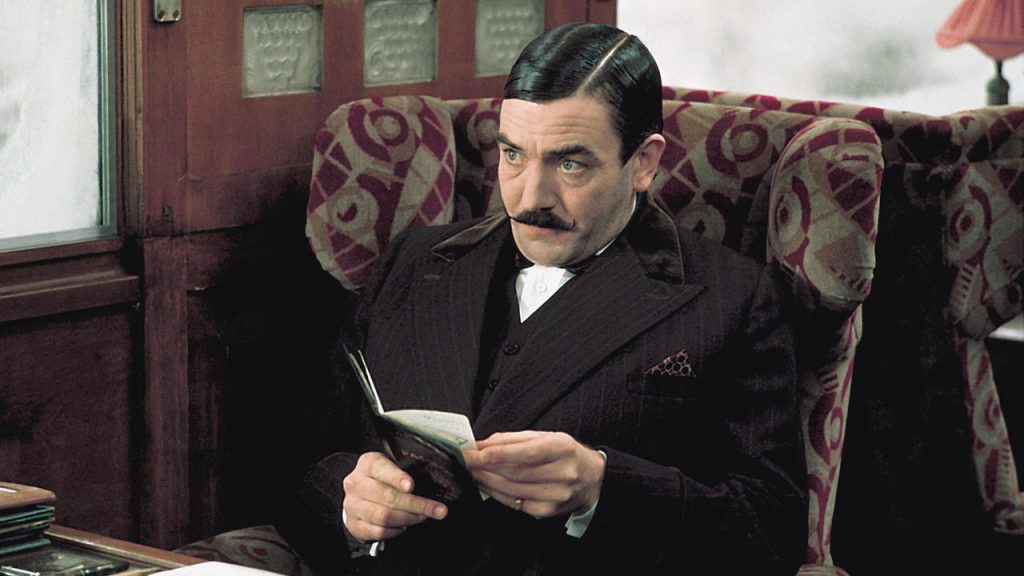 Directed by Sidney Lumet, this is a British whodunit based on the Agatha Christie’s novel (1934) by the same name and arguably the best adaptation of the novel in cinema till now. It is not so much of a mystery but indulges in the best form of genteel cross-examination by the renowned fictional detective, Hercule Poirot (played by Albert Finney here).

The much-loathed American millionaire, Mr. Samuel Ratchett, is aboard the Orient Express from Istanbul. A menagerie of quirky characters – from a Russian princess to an American theatre agent – and Poirot are traveling with him on the same train. Ratchett expresses concerns about the death threats he has received and is found stabbed to death in his cabin the next day. Poirot must identify the killer before reaching their final destination. This brilliant adaptation of the Christie novel manages to thrill you just enough while carefully balancing the high comedy that Finney’s performance as Poirot brings to the film.

Poirot’s eccentricity, especially Finney’s version of it, is unmatched by any other Christie character of this nature. Inspector Stallard’s character from the film, See How They Run (2022), vaguely recalls this madcap behavior, sans the ridiculous accent that Poirot flaunts. Just like the backdrop of the theatre works as a character in the latter, the train from Lumet’s film is almost as important as Poirot to the plot. Stylish and fast-paced, this film is reason enough for you to go to pick up a Christie book the next time you visit a bookstore and snuggle up with it on lazy winter afternoons. This is Agatha Christie’s work at one of its finest, and Lumet does justice to it in every sense.

My Policeman (2022) Movie Review: A Textured Backdrop Watered Down By An Absolute Lack Of Filmmaking Vigour

5 Films To Watch If You Like “See How They Run”