Scrooge: A Christmas Carol (2022), On Netflix: Some pieces of literature have been told and retold umpteen times via the movies. Names that come to mind include A Star Is Born, Oliver Twist, The Phantom of the Opera, Jungle Book, Jane Eyre, and Les Miserables. While these titles have about 4-5 different versions, there is one story that can claim to have over ten remakes. Some of them are good, some are bad, and some are so-so. Each version may have its own set of fans and identical films to compare it to, as every single variation would have been thought of and presented in the rich history of cinema. Ebenezer, Scrooge, A Christmas Carol, Muppets, Disney, etc., are some of the names that come to mind.

Has there been an animated retelling of this story before? Yes. Hence, even Netflix’s animated version of The Christmas Carol is not fresh. The story remains a popular Christmas classic despite editions of Charles Dickens’s novella getting produced year after year. 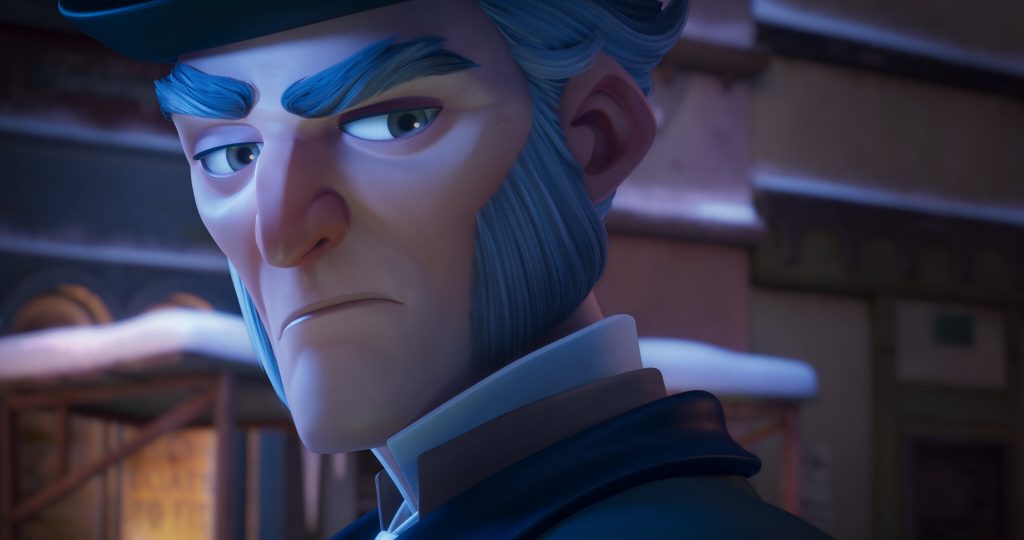 Audiences flock to witness the retelling of Ebenezer Scrooge being visited by Christmas past, present, and future ghosts. It helps them shed bitterness and ensures they aren’t forging imaginary chains that would weigh them down. Akin to the visit by the three ghosts, producers can learn something to retain the novelty of this tale.

They can remember the glorious past of this title, look at what they have done with it, and imagine a future where this title alienates audiences due to its absolutely cartoonish and kaleidoscopic presentation in 2022. Offerings like Scrooge: A Christmas Carol would undoubtedly not bode well for future remakes.

Netflix’s Scrooge: A Christmas Carol begins quite differently and may alienate fans of the original source material. We see Scrooge’s nephew prancing around and engaging in Christmas Carols. He starts with ‘Deck The Halls’ and proceeds to ‘I Love Christmas.’ The mise en scene at that moment resembles a kaleidoscopic introduction to what is supposed to be a dreary 19th-century London. However, I do get why director Stephen Donnelly presented it in this manner. He may have done so to show audiences why Scrooge, who despises Christmas, is disliked so much.

The kaleidoscopic presentation continues as Scrooge travels from the past to the present and the future. Some spark and color are fine, but beyond a point, I felt it was overdone. This creative choice may have even alienated the desired target audience. The frequent overuse of colors didn’t work for me, as A Christmas Carol has to have its joyful themes emerge after the cold Ebenezer embarks on his journey and thaws. Maybe they infused color to allow the younger target audience to watch this film. I wonder what a child would have said about Jacob Marley’s yellow glasses and his overgrown Mr. Freeze-esque eyebrows. It was pretty ridiculous to look at. How did that even make it out of Graham Silcock’s editor’s room?

Even if one were to view Scrooge: A Christmas Carol from the prism of a child, and even if one can overlook the bizarre animation, showing signs of humanity in Scrooge before the visit of Jacob Marley and the three ghosts was an absolute turnoff. Presenting him as just bad would have been the best way forward than letting the shades of gray narrative emerge.

This offering has some creativity as Scrooge sarcastically uses Christmas Carols to taunt those who owe him money joyfully. He receives his karma later on and assumes that it is all praise. These carol taunts would have worked well had the film not opted to be so, Uhm, dazzling? A few name changes attempt to keep things fresh, but that’s about it. Many will have tried to watch it and failed.

Around the 40-minute mark, Scrooge broke into a rendition of Goodbye. It was something I wished to follow as Netflix’s Scrooge: A Christmas Carol was extremely tedious to sit through. I struggled to understand the presence of original songs throughout the 101-minute run time.

In attempting to craft a glittering film, the makers of Scrooge: A Christmas Carol shun the magic of Christmas and the warm theme of selflessness and happiness. Re-watch other versions of The Christmas Carol, but avoid this one.

Related: Christmas With You (2022) Netflix: Movie Review & Ending, Explained – Do Angelica And Miguel Reunite After The Gala?

Where to watch Scrooge: A Christmas Carol (2022)