Once Upon a Small Town (K-drama), Season 1, Episode 7 Recap & Ending Explained: Episode 7 of Netflix’s K-drama is all about communicating your feelings. It is also about how well one takes someone’s point of view without taking it too hard on their ego. The show focuses on saying sorry if you have done someone wrong while forgiving the person who has wronged you. The latest episode is light and heartwarming as the characters try to manage adult issues/situations more humanely and maturely.

ONCE UPON A SMALL TOWN (K-DRAMA), SEASON 1, EPISODE 7 RECAP:

Episode seven picks up with Ji-yul remembering that he was Ahn’s secret friend when they were little kids. The latest episode shows us the young doctor of the town keeping a watchful eye on the street to chance upon meeting the police officer. However, Ahn has been feeling a little distant these days. She waits outside the police station, and the head of police joins her. It seems Ahn always needs to be busy in life and can’t do a day without working. Her boss suggests that she must be smitten by the charms of the young vet of the town. Of late, she has been keeping her thoughts to herself than spilling anything out.

Han Ji-yul, on the other hand, is lost in thought at the hospital when two young kids visit to get their tiny sick rabbit for a checkup. Judy has not been eating and has been suffering because of diarrhea. Doctor Han quickly looks at the young rabbit; however, when he takes her into his hand, he realizes it has been a long time since he held any animal that tiny. Assistant Lee quickly hands over some money to Seon-dong and asks him to take her friend out to buy some popsicles while the doctor looks at her pet rabbit.

The girl gives the money back, saying she is good at caring for others. Hearing this, Ji-yul notices her words remind him of young Ahn, who was also more concerned about others than her sufferings. Both the adults here notice that the young kids have odd chemistry indicating misunderstanding. After checking the rabbit, Ji-yul suggests that the little animal must be kept in observation at the hospital until it gets better.

Later, when the girl leaves to be with her other best friend, Ji-yul speaks to Seon-dong to know why the two kids are not talking. He has found a little friend in this kid who shares his wisdom with him now and then. After knowing the problem Seon-dong and his friend are undergoing, Ji-yul realizes that he has also done something similar to Ahn. He does not remember his promise when he gifted her the book as a kid that mentions them being secret friends.

Ji-yul listens to his little friend and suggests not talking to his best friend for a while. He also advises him to give her some time to come around. The doctor feels that some angry feelings go away after you think about them on your own. No matter how much effort one puts to appease the person in front, it will only worsen things.

He then wishes Seon-dong good luck, and the boy gets up to leave as he cannot leave his girl to be with a better-looking guy. Right before the kid leaves, Ji-yul asks why he didn’t see him in the morning. Seon-dong informs the doctor that because his summer breaks had commenced, there was no school that day.

In the next moment, Ji-yul remembers Ahn’s face and her asking about his well-being when they see one another after her return from the hospital. Thinking about her simplicity and the ease of talking she has in her personality, Ji-yul takes out his phone to call her. However, his assistant calls him inside to check on the cow, which has been in labor for a whole day.

Ahn is on a call with her aunt Gyeong-ok who informs her that there is a National singing contest and it will be held at Majeong (not a great news for her other aunt to get upset after what happened at the town meeting). The other two officers discuss this with Ahn, where the chief of police suggests that if one goes to the neighboring town to watch, they will be signing their death warrant. 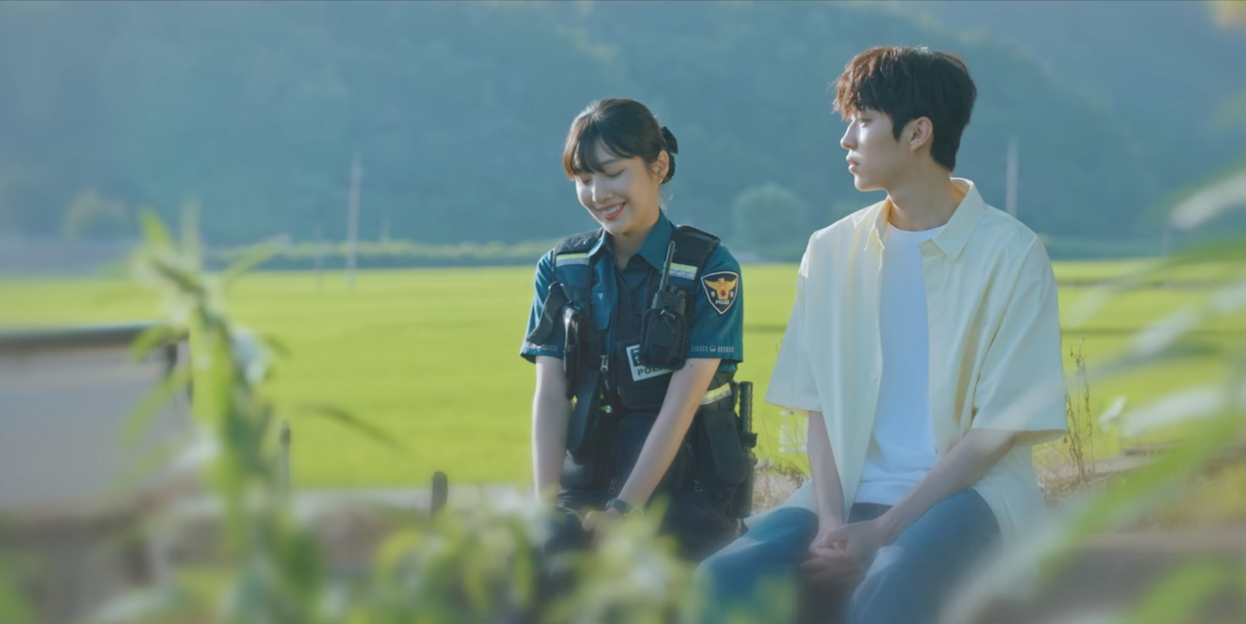 Soon Ahn notices Seon-dong walking by himself with a sulking face. Sang Rye-on and her friends are unhappy with the news of the singing contest in the neighboring town. She says that if they lose the specialization funds to the enemies, she will have to decide about moving out of Huidong.

In the meantime, while talking to Kim Seon-dong, Ahn learns about everything that happened between him and his best friend. She tells him that Hui-won is upset with him because he is not sorry to her for what he did. It seems she is angry about the fact that Han Ji-yul has never apologized to her for his mistake of not being able to remember their childhood pact. And she sees the young kid repeating the same blunder the town doctor did. Ahn explains to the child that it is essential to show the person in front how you feel from the inside when expressing feelings. It seems love is not as easy as people think it is.

As Han Ji-yul drives back to the hospital, Seon-dong comes crying and shouting about how he and Ahn ruined everything for him. After serving him hot chocolate, Ji-yul asks about everything. Ji-yul carefully listens to everything that Seon-dong did as Ahn advised; however, his efforts with Hui-won backfired. He shares that she thinks he has a split personality where he would let her be or be sorry and show too many emotions.

Seon-dong also tells Ji-yul that Ahn told him to say sorry ten times if he is sorry for what he did. She thinks that doing nothing would make things worse. At this point, the episode shows how young men and women think differently and have a distinct understanding of relationships and human nature. While Ahn feels talking things out is a way to resolve conflicts, Ji-yul, at the exact time, feels letting the person be is a way to get over things. Ji-yul and Ahn are trying to communicate with one another by giving their opinions to the young child. However, Seon-dong is conflicted as these opinions are not helping him resolve his issues with his friend.

Later, we see Ji-yul visit someone at their house, and he comes across Ahn Ja-young. The two share at first share an uncomfortable and shy glance, but soon Ahn thanks the doctor for helping her during her accident. However, their conversation soon becomes awkward with their cryptic fight as they have personally taken Seon-dong’s situation, making it their problem.

When Ji-yul tries to bring the conversation about one another’s suggestions to the young kid, Sang Hye-on enters the scene. He completely ignores Ji-yul’s presence, ending the doctor’s discussion with Ahn. Later, Sang Hye-on asks Ahn about the guy from Seoul. She says he remembers her now after all this time, but it makes no sense because he will leave very soon. Hye-on mentions that he will leave for Seoul to meet a client and asks her to be safe while he is gone.

Later, in the hospital, Ji-yul pouts by himself. His friend Yun-later calls him, with whom he shares the recent developments in his equation with the police officer. He tells him that Ahn looks way different than before as a kid, and he remembers every detail of his friendship with her. However, his colleague states the truth as a fact to him that Ji-yul must have been very rude and unkind to her, considering he didn’t know her before.

ONCE UPON A SMALL TOWN (K-DRAMA), SEASON 1, EPISODE 7 ENDING, EXPLAINED:

Hui-won reaches out to Ji-yul soon after his call, with a worrisome text from Seon-dong. It mentions that she must never look for him and he won’t bother her again. Ji-yul reaches the police station to report the issue after searching for him at his house and the nearby places he goes. Everyone gets worried about the young kid, as Ahn shares what he has been dealing with throughout the day that made him upset and thereby taking this decision.

Without wasting any minute, the police officers and Ji-yul announce to the town that Seon-dong hasn’t returned home. In the meantime, the town adults divide themselves to search for the young kid. While searching for Seon-dong together, Ahn is irritated with Ji-yul as she asks how he can advise him so immaturely about handling his situation with his friend. 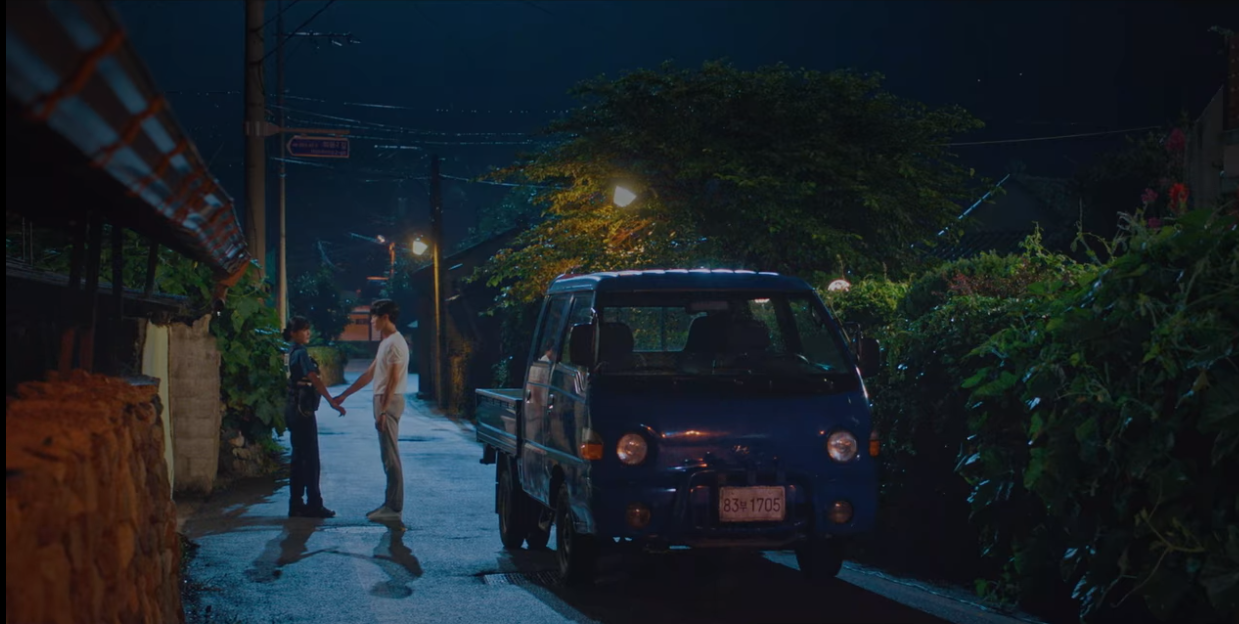 Even though Ji-yul admits that he is partially responsible for such a situation, he tries to explain that the advice was to keep a safe distance from Hui-won, but not in this way. He also tells Ahn that he only said this because Seon-dong mentioned how Ahn’s suggestion almost ruined everything for him.

Ahn shares that feelings are bound to get hurt if one doesn’t talk about them. When people get angry, they often say harsh things, but it is always good to apologize immediately and makeup. She asks Ji-yul if it does any good to wait until the other person gets tired.

Ji-yul feels the timing is everything and saying what needs to be said doesn’t make sense to him. The two continue searching for Seon-dong while dealing with their issues of processing things differently and resolving conflict. The two have taken one another’s viewpoint personally and started commenting on each other’s take on relationships.

While vocalizing his thoughts, Ji-yul wrongly mentions how Ahn would know anything when she is not in a relationship. She steps back and says that she would rather not be in a relationship than follow his principles.

Soon, Ahn receives a call from her chief and learns that Seon-dong has been at the bus stop waiting to leave the town. While driving to the place, Ji-yul and Ahn share an uncomfortable silence. After thinking a lot, Ji-yul shares his feelings by applying them to Seon-dong and Hui-won’s situations.

He tells her that he should have been mature enough and apologized to her more sincerely. After discovering they are on the same page when it comes to apologies and forgiveness, they share a smile suggesting their misunderstanding has ended. After reaching the stop, both Ahn and Ji-yul tell Seon-dong that Hui-won is no longer angry with him and he must return to the town with them.

On their way back, we see a flashback to when Ahn learns Ji-yul remembers her. She tells him she thought she would have a lot to share with him after all this time but has forgotten everything. Even then, she did most of the talking, and Ji-yul hardly ever said anything to her; she noticed nothing has changed.

Ji-yul asks her how long she has known it was him after all. She tells him that he wrote his name in the diary he gave her, and since he is the only grandson of Director Han, it was not difficult for her to recognize him.

Coming back to dropping Seon-dong at his house, Ji-yul waits for Ahn to return. He tells her that she is the only best memory he has had since they met, and he feels apologetic for not being able to remember her in the first place. The episode ends with the two looking deeply into one another’s eyes.