Aki Kaurismaki's idiosyncratic handling of the formal space and deliberately dismal production design are full of his trademark touches. This may be a world far removed from the grim reality, but this is an enriching minimal construction of an atmosphere balanced with everyday kindness and casual cruelty.

The Other Side of Hope [2017]: A Compassionate Refugee Dramedy

Finnish auteur Aki Kaurismaki is one of the important proletariat film-makers in modern world cinema alongside Dardenne Brothers & Ken Loach. But if his thematic and directorial approach is bit overlooked it’s because his films are stylized tragicomedies. The reticent droll acting, the quirky one-liners, meticulously designed visual jokes, and supremely poised compositions have been the familiar markings of Mr. Kaurismaki’s cinema (since early 1980s). One of the recurrent criticisms about his cinema is that they are unrealistic and boringly minimalist. Nevertheless, for Kaurismaki admirers (like me) the prospects of making a cinematic excursion to the pensive as well as empathetic industrial wastelands bestow a kind of warmhearted feeling. What’s so special about Aki Kaurismaki? Ok, he champions the ostracized and dogged, homeless and drifters, yet isn’t his stories are just potpourri of popular genre: ranging from road movie to gangster and film noir? What I particularly love about Kaurismaki films, apart from his precise comic timing, is his idiosyncratic construction of cinematic space. 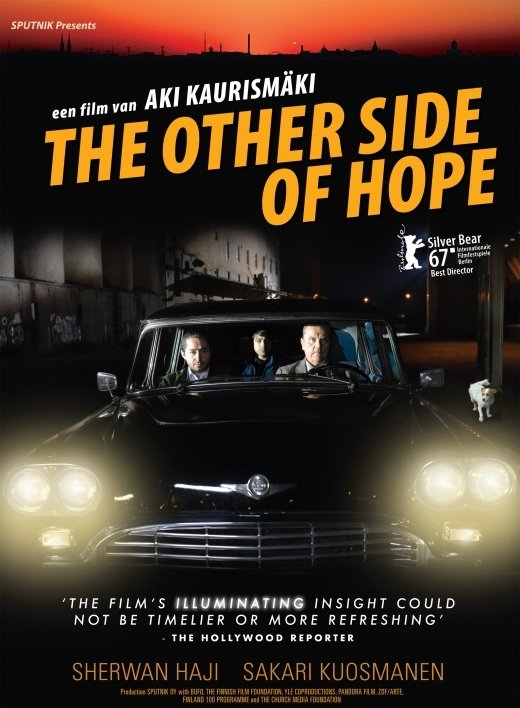 The Finnish auteur, who proclaims Yasujiro Ozu as the chief influencer of his style, keeps story to the background and employs carefully designed cinematic space as the primary critical space. Mr. Kaurismaki’s shots of the city, street views, colorful cafeterias, bland government offices, ominous underpasses and docks becomes the critical spaces which subtly & wittily interrogates the social, political and economic power structures. Moreover, the uncommunicative stance of Kaurismaki’s actors doesn’t indicate the lack of emotions (The Match Factory Girl only has 24 lines of dialogue, yet it was the director’s heartrending movie). In fact, the absence of eloquent verbal expression allows us to find emotions elsewhere: in the little evasive gaze or side-glances or down-cast looks or in the perfectly-matched melodies (Finnish tango). Although his chief characters seem to be confirming to the stereotypes, he slowly deconstructs their alleged single identity to look beyond and into their kind soul. Unlike Jim Jarmusch’s works, Kaurismaki’s depiction of the mundane rhythms of life isn’t externally upbeat. The working men & women of Helsinki city, unlike their American counterparts, are subjected to life-shattering economic trends and seem deeply embroiled by the seclusion on arctic stretches. Yet, within this melancholic fortress, gentle breeze of bone-dry wit and altruism freely flows. A tinge of empathy and humanism boasts the power to cleanse the apathetic, monotonous atmosphere in dock containers, truck depots, mines, and heavy industry.

Aki Kaurismaki tackled the refugee crisis in his own way in 2011 movie Le Havre, a tale about African migrant arriving to a French harbor town. It was intended to be the first of his dock or harbor or port city trilogy (Kaurismaki has previously made unofficial ‘Proletariat trilogy’ and ‘New Finland’ trilogy – his very best — which portrayed unemployment, homelessness and destitution in his homeland). The director’s latest movie – the second entry in the trilogy – The Other Side of Hope (‘Tovion tuolla puolen’, 2017) is set in capital city Helsinki and addresses the homeland’s cold-hearted nature in tackling the recent humanitarian crisis. The film was screened at this year’s Berlin Film Festival (winning the Silver Bear). However, to our dismay, Mr. Kaurismaki has announced that there won’t be a third film in the alleged trilogy. He has previously announced retirement way back in 1994 and so I hope the 60 year old Kaurismaki will return back to his craft. Moreover, in the Guardian interview, the director has stated that his decision to retire is due to technical difficulties (he still shoots on film): “It depends on the laboratories. There are only a few left in Europe.” Whatever his future decision is going to be, for now it is enticing to return back to Kaurismaki’s universe of melancholy, cigarette smokes, vodka, outdated retro objects, and deep-seated empathy.

The Other Side of Hope revolves around two people: Syrian refugee Khaled (Sherwan Haji) and middle-aged Helsinki resident Wikstrom (Sakari Kuosmanen). The film opens at the dead of night with Khaled emerging from coal pile on-board a freighter. Waldemar Wikstrom, a clothes salesman, packs his bags, removes the wedding ring, and leaves off his stern-faced wife to gaze at the bottle of cheap vodka. Wikstrom drives his vintage car into the darkly-lit streets. For a brief moment, Wikstrom’s path crosses Khaled’s whose face is blackened by soot, indicating that the convergence of their path will also happen later in the narrative. Both Wikstrom and Khaled persist with quiet determination to start a fresh life. Khaled, an Aleppo mechanic, in his asylum-seeking journey has accidentally ended-up in Finland. After applying for political asylum to live in the peaceful country, he keeps his hope alive of reuniting with sweet sister Miriam (Niroz Haji), lost during the difficult journey across multiple borders. Despite the horrific reports about the Syrian war, the blank-faced pen-pushers of the state seem indifferent to the immigrant’s pleas. Meanwhile, the grouchy-looking Wikstrom has taken the new avatar of restaurateur. He buys an elegantly furnished yet a run-down restaurant named ‘The Golden Pint’. It’s not long before Khaled ends up in the care of  Wikstrom. The two plus the three under-achieving and drolly melancholic restaurant employees form an unlikely community, brought together by circumstance but held strong by unsentimental humanism and imperturbable dignity.

The idiosyncratic handling of the formal space and deliberately dismal production design are full of Kaurismaki touches. This may be a world far removed from the grim reality, but this is an enriching minimal construction of an atmosphere balanced with everyday kindness and casual cruelty. Once again the dead-pan dialogues and stoic dialogue delivery of the actors keeps the narrative buoyant. Like every other Kaurismaki outings, the film is concerned little with the details of plot and more focused on the innate kindness of its characters. Viewers new to Kaurismaki’s works (or his detractors) would find the film too sophisticated or liberal for their liking (I feel that either The Man without a Past or Drifting Clouds provides fine entry point to the auteur’s works). The coming together of Khaled and Wikstrom leads to some of the movie’s funniest and poignant scenes. Wikstrom and his crew’s effort to refit the café into a sushi restaurant were so hilarious. As I mentioned, Kaurismaki’s movie don’t have big payoffs or quote-worthy one-liners. It’s all about bringing together the simple, altruistic and compassionate individuals to form an unlikely family unit (‘Dying is easy, I’d like to live’, says Khaled which sums up the inviolable determination of Kaurismaki characters). The other side of hope may seem to suggest the racism and bureaucratic apathy found in modern cities. Yet, even in the opposite shores of hope, a small gesture of empathy promises to shatter the emotional frigidity. Think of Goliath and David: the stark reality that stands up with all its devastating mightiness and then there’s the little cinematic space forged by Kaurismaki whose refined minimalism champions the everyday victories of humanity.

The master of economic storytelling Aki Kaurismaki, with The Other Side of Hope (100 minutes) once again delivers a bittersweet, timeless fable on the unyielding marginalized souls. Although a tad lighter than his previous best works, the Finnish auteur continues to gracefully mix his trademark dead-pan humor with unsentimental display of humanism.

0 shares
Tags:2017Aki KaurismakiDramaHelsinkiMelancholySilver BearThe Other Side of Hope
Previous post