Home»Reviews»Antiporno [2017]: In The Name of Sisterhood
Reviews

When it comes to the arts, creator and creation are inseparable.

Through the application of creative interjections ranging from alter egos and exaggeration to wish fulfilment and romanticism, no body of work is exempt from its maker’s influence.

Take Hitchcock’s use of Cary Grant and James Stuart for instance.

The former represents a polished persona he wishes to embody, while the latter is more of a mirror representation of how he sees himself.

Molly Stern, publisher of the Crown, Hogarth and Archetype imprints refers to this influence as “Stylistic earmark” (similar to when pets start to resemble their owners). 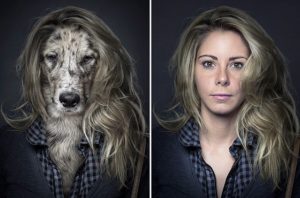 The artist of today’s picture is no exception to this model. Japanese auteur, Sion Sono inserts himself into his work through the use of contrast. He utilizes glaring dualities to materialize his vision and give flight to his message. That’s probably why the narrative is so multi-faceted.

We’re getting ahead of ourselves. So what’s the story? 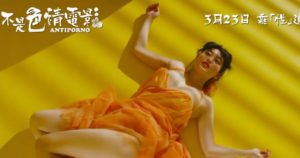 There are two themes at play here.

We’re all familiar with the virgin-whore complex, the latest notch in the old patriarchy tool belt. 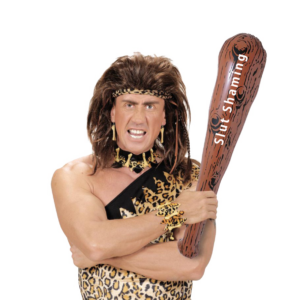 Very early on, we’re introduced to the main motif of the film as illustrated by the line “I’m a virgin but a whore. I must be one or the other”.

A good portion of the movie is dedicated to exploring the merits and constituents of these male-perpetuated terms. With that said however, this discussion transcends the primitive confines of the blame game and delves into a more thorough scrutiny.

Taking that into account, the women on this set are forced into a lose-lose situation where they have only one of two categories to conform to. This breeds malice and hatred among fellow females all in the vein of satisfying the male-centric demands of their society. 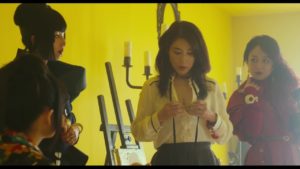 Sono uses contradictions to flesh out this dichotomy modeling the atmosphere after a pendulum oscillating between argument and counter argument.

Thus, for every matter, the film presents an anti-matter. So in the face of glamour, there’s realism, for mania there’s detachment, for euphoria, there’s depression, for desirability, there’s undesirability. But most importantly in the face of liberation (or the pretense of it), there’s oppression. As a result, the characters themselves shift between wielding control to yielding to it. 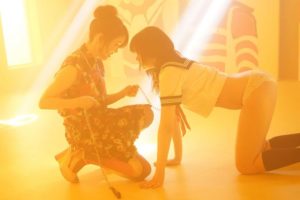 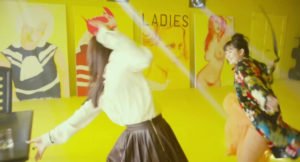 One only has to look at the two distinct colors of the set to notice this distinction.

In this reality, there’s no winning; only losing with minimal friction burn. Such an antagonistic environment presents a lot of restrictions for the women who no doubt feel trapped.

On the micro level, our main character has additional cause for feeling so. Having to re-shoot the same scene over and over again, she keeps reliving the same traumatizing day of her sister’s suicide and her own sexual assault. This does not work as a coping mechanism because while picturing different scenarios allows for a chance to reset what has happened and try again, the same tragic outcome is inevitable. Thus, Kyoko fails to make it right over and over again.

The employed visuals strongly support these implicit concepts in the narrative. The claustrophobic set alone is enough to dwarf your sense of freedom and terrorize your senses. 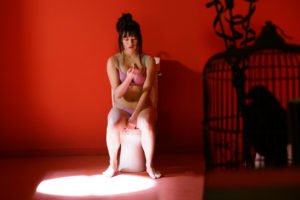 Is it for everybody? Probably not. It may be too absurdist for the casual moviegoer and too reserved for the art-house film patrons. This is mainly because it adheres to the specific rules that are only valid in the singular universe it exists in.

Through meticulous effort and a lot of heart, Sono succeeds in walking the tight rope of providing commentary without being preachy.

This movie is rated M for Male Gaze Friendly.