The Khrushchev Thaw represents the period in Soviet Union following the death of Joseph Stalin (March 1953) that allowed for considerable cultural and political liberalization. In February 25, 1956, Khrushchev delivered a speech to the international communist leaders (known as ‘secret speech’) at the Twentieth Congress of the Communist Party of the Soviet Union.  This launched the political reform, later termed as ‘de-Stalinization’. The strict censors yielded a bit, providing room for artistic self-expression. It’s not that the political persecutions were non-existent in this period or that the artistic works were devoid of state propaganda. In cinema, the thaw era brought new generation of film-makers experimented with new forms. In 1957, Mikhail Kalatazov’s The Cranes Are Flying won the Palme d’Or award which was one of the exemplary films of the Thaw period.

Before The Cranes Are Flying, there were two landmark films which signaled the arrival of the poetic cinema of Thaw. One was Grigori Chukhrai’s The Forty First (1956) and the other was Marlen Khutsiev & Feliks Mironer’s romantic melodrama Spring on Zarechnaya Street (‘Vesna na Zarechnoy ulitse’, 1956), the latter a huge commercial success and became a cult classic. The Harvard Film Archive mentions that there were three Soviet movies in 1956 with the word ‘spring’ in the title, ostensibly indicating the new season in Soviet politics and culture. Spring on Zarechnaya Street is set in a provincial industrial town, where a recently graduated young teacher named Tatyana Sergeyevna (Nina Ivanova) arrives to teach Russian literature at the evening school for the working youth. 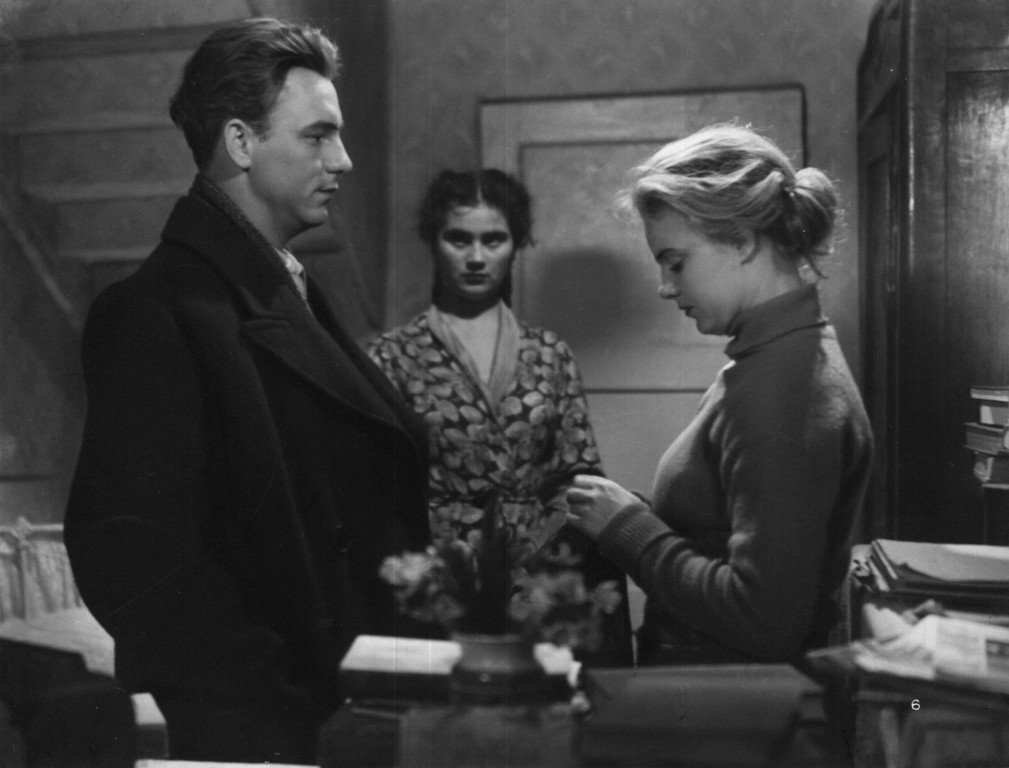 Her pupils are metallurgical plant workers. Tatyana aka Tania’s old friend is an engineer at the plant and he finds her a room to rent. He also introduces her to the adult worker-students. Sasha Savchenko (Nikolay Rybnikov), the swaggering steel-maker, is attracted to his new teacher and creates opportunities to gain her attention. Tania, however, ignores him and later treats him with mild contempt. Sasha, naturally finds it hard to understand the educated Tania’s behavior. The rejection makes him think of his ‘unworthiness’ and he stops taking the lessons. There are also few dramatic misunderstandings as one could expect from such a storyline.  Meanwhile, the bookish Tania also undergoes a change and gradually warms up to her new surroundings.

Spring on Zarechnaya Street, similar to other films made in the era, does withhold political subtext and propaganda. But the absence of restrictive aesthetic policies allows Khutsiev to put the human faces and their emotions at the forefront. The camerawork is astoundingly innovative, and there’s a bit of authenticity in the portrayal of workers and their immediate surroundings. Except for the cheerfully exaggerated montage of Tania visiting her worker-students at the factory – each shot in this tableau brimming with such beauty and joy – the narrative focuses on the ordinariness of the workers’ lives.

The very opening scene of Spring on Zarechnaya Street, which establishes the context for Tania’s arrival, simply observes the textures of the town: crowd of workers in raincoats moving through the streets towards the factory smokestacks. We see young workers walking away from the factory after their shift with foamy mugs of beer in their hand. The workers live in cramped spaces, the interiors are modest, and there’s an indication to housing shortage. Having read a bit on how Soviet censors plough through the narratives to find anything that doesn’t conform to the Soviet archetypes, a lot of representation here by Khutsiev and Mironer is fascinating.

Spring on Zarechnaya Street could simply be read as a narrative of transition. Tania after few emotional struggles accepts the industrial town as her new home. Sasha, a worker with crisis of self-esteem, eventually acknowledges his true feelings for Tania and gains back his confidence. As expected, Mironer and Khutsiev are more sympathetic to Sasha, whereas Tania’s emotional frigidity is criticized. However, the ending is surprisingly ambiguous which remains content in just emphasizing on the transition underwent by our hero and heroine. They have conquered their personal insufficiencies. The ending doesn’t say anything about a possible romance. It rather comments how these two individuals can peacefully co-exist in the society. Of course, the individuals belong to archetypes, i.e., Tania belongs to the intelligentsia while Sasha belongs to the proletariat.

Reading from this Soviet-specific lens, Spring on Zarechnaya Street only gets more fascinating, and there’s a kind of fun in figuring out how the propaganda is subtly incorporated. The deterrent factor to Tania and Sasha’s possible romance is, although on the surface seems to be conflict in emotions, Khutsiev and Mironer elegantly play with the underlying archetypal representation. In one intriguing scene, Sasha and Tania sit together in her room when Tania eagerly starts listening to classical concert music. Sasha blankly looks at Tania’s rapturous feelings dancing over her face, while he is unable to lose himself to the music. He slowly withdraws from her, nervously fiddling for cigarettes, and quietly leaves the room.

Also Read: The Commissar [1967] Review – A Startlingly Envisioned Drama on the Cruelties of War

Still as many film scholars of the Soviet cinema indicate (particularly Josephine Woll in her book ‘Soviet Cinema and the Thaw’), there’s a strong individuality to the characters and their empowerment is to an extent authentically realized that the predictable political subtext or lessons of the era never overpowers Khutsiev’s bewitching form. The way Khutsiev utilizes space and seasons to create a poetic ambiance is something that must be experienced first-hand. The director’s I Am Twenty (1965) – which came under the scrutiny of Khrushchev and subsequently edited and truncated – was full of brilliant long passages depicting troubled youths’ emotionality that’s in a way was freed from narrative constraints. In Spring on Zarechnaya Street, Khutsiev often intimately studies the characters’ faces, allowing their individuality to take precedence over the communal point of view, which is usually the dominant factor in Soviet cinematic representations.

Overall, Spring on Zarechnaya Street (96 minutes) is a profoundly influential Soviet cinema of the 1950s with charming performances and distinctly lyrical aesthetics. Despite the badly translated and misspelled English subs, the film is worth watching for its imagery.

After Ever Happy (2022) Movie Ending, Explained – Is This The End For Tessa And Hardin?