After moving away from excellent biopics to explore sub-genres of 1980s exploitation cinema, in a modern setting, with The Girl on the Train, Ma, and Ava, Tate Taylor revives American International Pictures with Breaking News In Yuba County, a dark comedy featuring the same wild inanity as the studio that produced Coffy, Foxy Brown and Blacula (plus its incredible sequel, Scream Blacula Scream).

The plot is as crazy as most films AIP made. After her husband, Karl (Matthew Modine), shockingly dies of a heart attack while he is caught cheating, Sue Buttons (Allison Janney) buries and body and pretends he has been abducted so that she can finally get the media attention she’s always wanted. However, one detective (Regina Hall) does not believe her story and thinks Sue has done something to her husband. At the same time, Karl’s brother (Jimmi Simpson) believes bandits Raj (Clifton Collins Jr.) and Mina (Awkwafina) abducted his brother and needs to find a ransom to “free” him. The result is a delightfully twisted, almost insanely perverse film that only happens once in a generation.

Related to Breaking News In Yuba County – The Blood of Wolves [2018]: ‘NYAFF’ Review

It happens one too rarely nowadays that a filmmaker gets inspired by Joe Dante to create a narrative as purely nuts as his 1989 film The ‘Burbs. While the premise isn’t the same, Taylor retains Dante’s spirit at crafting an unpredictably ridiculous plot with exaggerated setpieces whose cathartic release inadvertently becomes comedy. Multiple sequences contain excessive amounts of gratuitous violence, but I couldn’t help but laugh at its incredible comedic timing. There is nothing predictable about this movie, even if we know the “outcome” of Karl during the movie’s first act. Since multiple storylines interweave with one another and culminate in a truly delightful (but insanely deranged) finale, the audience can quickly sweep themselves in Yuba County’s deprived neighborhood. 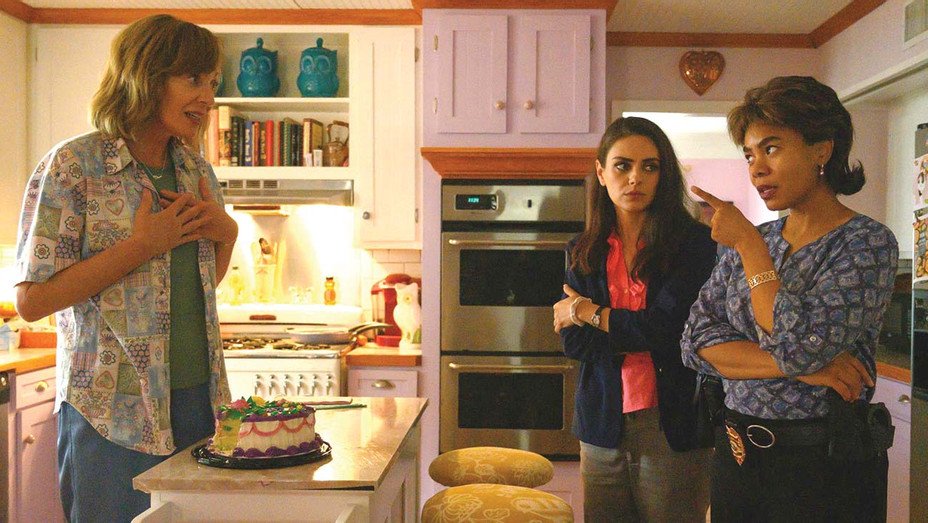 Allison Janney is brilliant as Sue Buttons, a woman who is tired of being ignored by everyone and only wants the world to “look at her” to confirm that she is vital and important. Breaking News in Yuba County’s storyline is entirely based on Sue’s egotism. The smallest detail on her “plan” to become famous by exploiting her husband’s death for media attention is as timely as Matt Spicer’s analysis on attention-seeking influencers in 2017’s Ingrid Goes West.

When Karl’s mistress (Bridget Everett) comes back in the picture, also looking for fame and money to “create” her side of the story (even though she is responsible for his death), Breaking News in Yuba County showcases how easy it is for audiences to start believing in people they don’t know through the sphere of media manipulation. We seem to underestimate how powerful the media is, as it can create one side of a story that audiences will instantly believe in. No matter what objective fact is thrown at them, their perception will never change once they start to side with someone. This is what happens to Sue Buttons: the media, most notably Gloria Michaels (Juliette Lewis), is on her side. And that, in this day and age, is more powerful than a court of Law.

While Breaking News in Yuba County succeeds at creating a fiendishly unpredictable story filled with multiple twists and turns that’ll make your head go completely crazy, it’s also incredibly frustrating to watch. Many side characters are significantly underdeveloped, and their star-power feels inherently wasted. The only supporting character that truly wowed me was Wanda Sykes’ Rita, a store-owner who wants to “feel alive” by helping Karl’s brother commit theft, though this “feeling” will ultimately lead to her demise. The rest of the supporting cast, though star-studded, give subpar performances, particularly Regina Hall’s clichéd arc as Detective Harris, a police officer who doesn’t believe in Sue’s manipulative story and thinks she killed her husband. It’s the only time Breaking News in Yuba County goes into a predictable territory and the only character that gets an unsatisfying end, compared to what Taylor initially set-up for the character.

Still, if you’re looking for a wild ride that will constantly surprise you due to its multiple storylines of chaos, Breaking News in Yuba County might be the perfect movie for you. It definitely is a lot to process at once. Still, it never lets go of its promise of being as insanely fun as the exploitation films American International Pictures has produced in the past. Don’t think about it too much and enjoy the sick and twisted world of Yuba County…you might find something of value in it.