Nervous Translation [2017] Review: The Cinematic Beauty of A Child’s Gaze

She acts according to her surroundings and reacts to it. We see mostly her reactions without actually taking part in it. There's hardly a strong character shift. What may seem like a vacuum narrative as a result of that, doesn’t feel like an artsy choice. It is well-suited to give preference to the environment she inhabits, which is what the film is primarily about.

Shireen Seno has worked with Lav Diaz in her early career as a photographer. The contemplative tone of Diaz’s films reflects in her sophomore feature, ‘Nervous Translation’. After ‘Big Boy’, this is her second coming-of-age tale. The protagonist from this film, Yael, is a shy, eight-year-old girl from the Philippines who looks at the world with her brooding eyes. The film revolving around her is confined between the walls of her home from Manila, just like her self-contained world.

Shireen, the director, describes herself as a ‘lens-based artist’ than a filmmaker. It is quite apparent in this film which relies more on the visual progression than a narrative graph. Most of the film has zoomed-in visuals, which leaves a very little area around the subject in the frame. It takes us so close to the character, quite literally, that we perceive them with the required intimacy. The film captures the world through her eyes and doesn’t shy away from sharing a strange yet peculiar outlook. Moreover, there’s very little adult intervention during its presentation, which makes it all more absorbing. 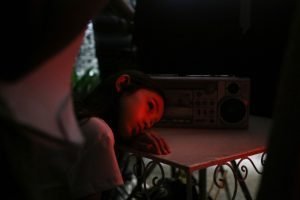 Related to Nervous Translation: THE 15 BEST ASIAN FILMS OF 2017

Yael’s worldview is shown with what might interest her or what she would be inclined to do. Because of the absent father, she has to live with her mother, Val, who works at a nearby shoe factory and prefers to be quiet and secluded with her own thoughts. As a result, Yael needs to contain her bundle of emotions. It creates a struggle for a child with overbearing curiosity. She finds outlets to express herself while clinging to her father’s voice from the tapes that he sends from Saudi Arabia, which are actually meant for her mother. Whether through his voice or the fake baking endeavors she indulges in with her miniature cooking-toys, she ultimately hopes for some kind of acknowledgment or a sense of connection. Meanwhile, her wandering eyes capture the beauty in her mundane routine. Afterward, even when her confined world gets disrupted by the relatives, her presence is just as quiet and observant as before.

While showcasing much of this, there’s very little that happens to her as a character. She acts according to her surroundings and reacts to it. We see mostly her reactions without actually taking part in it. There’s hardly a strong character shift. What may seem like a vacuum narrative as a result of that, doesn’t feel like an artsy choice. It is well-suited to give preference to the environment she inhabits, which is what the film is primarily about.

Every technical detail is a marvel to experience yet requires our utmost attention. Due to the often lingering shots and the jump cuts, it might get hard to focus for many viewers. But it’s extremely absorbing once you submit to her style and get acquainted with it. The feeling of passing time, as her previous mentor Lav Diaz has mastered in, is felt through even the brief moments that Yael goes through. The sounds add another layer to accentuate the director’s approach. Whether it’s just the ticking of a clock or Yael’s random humming, the film seamlessly invites the viewers to be a part of it. And every single shot is so cautiously lit that makes it even more enticing not to fall in love with it. In addition to that, the lead performance by the young Jana Agoncillo is extremely promising. 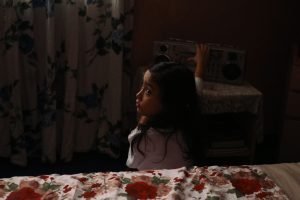 While being a part of Yael’s fantasy, the film also presents the reality of a period that it belongs to (the post-dictatorship Philipines from late 1988) and its repercussions on them, as individuals and a family. Whether it’s the socio-political reason that distanced her father from them or the real announcements or advertisements from the actual period it depicts, it infuses these elements with her narrative to reason their detachment and alienation. Even when it hardly has a direct result on Yael’s character, it has significant undertones on her personality.

The subtle remarks by her lack of enthusiasm while reacting to her relatives or getting influenced by the fake-fantasy commercial of a pen claiming to be ‘for better human life’; the film also makes timeless statements on the behavioral pattern of similar individuals and the situations causing them. As a result, Nervous Translation creates a universal picture of what it is live as a shy, introverted eight-something in this widely fascinating piece of filmmaking.

Nervous Translation [2017] Review: The Cinematic Beauty of A Child’s Gaze