You don’t need another article screaming how awesome Breaking Bad pilot is. In this article, I want to discuss some basic yet lesser discussed techniques that you can learn from this teleplay and maybe incorporate in your own writing.

There are a few things that bug you when you read the original Breaking Bad pilot that Vince Gilligan wrote. Firstly, it’s not Walter White’s 50th birthday. He doesn’t say ‘fuck you and your eyebrows!’ to Bogdan. And the most unforgivable, Jesse Pinkman is called Marion Alan Dupree! Yeah, you heard it right. Jokes aside, it’s a great screenplay, one that amateur TV writers behold as if it’s the monolith from 2001: A Space Odyssey.

Here is what I learned from Breaking Bad pilot:

Some episodes open with a teaser. The function of a teaser is to tease conflict of the story, to get viewers hooked instantly. Remember the opening scene of Breaking Bad pilot? A guy in underpants has two dead bodies floating in his RV. As sirens approach near, he records a video message confessing how much he loved his family. He is ready to shoot the first cop he sees.

Instead of introducing characters through a day in the life, it skips directly to the interesting part of the climax where the protagonist is at his lowest. You don’t know him but you want to know his story. What happened to him? How did he end up here? Also, notice how Vince Gilligan uses this high tension situation to do the exposition. The video recording fits organically into the scene. It tells us that his name is Walter White, his wife is Skyler and son is Walter Jr. A close on his wallet reveals that he is a high school chemistry teacher. It practically tells us everything we need to know about him.

Also read: The Babadook: How to Create Empathy

Imagine opening Breaking Bad with Walter lying awake in the bed or eating breakfast or staring into space. Not only it is boring but there is no motivation for the audience to watch it further. It’s way more fun to open with a high tension situation and show the audience how we got there.

In his book ‘Story’, Robert Mckee says that emotional change must occur in each scene. Meaning if a scene starts with emotional tone ‘+’ it should change to ‘-‘ at least once in the scene. Good News/Bad News works on the same principle. Every solution should lead to a new problem. This technique makes scene exciting by fluctuating character’s emotional value from high to low, forcing the audience to experience the same. The goal is to never keep the audience in the same emotional state.

Let’s break down the climax scene of Breaking Bad pilot to learn how good news/bad news technique is applied in the scene. 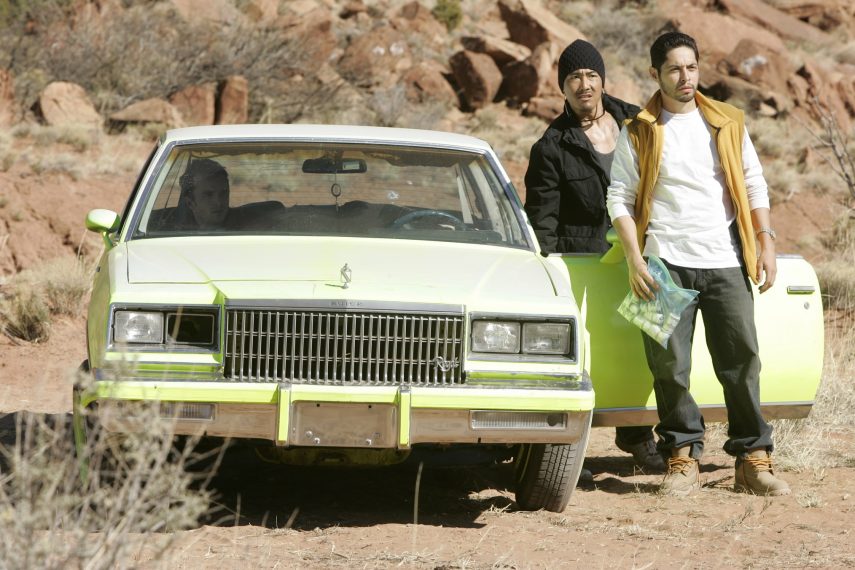 Scene: Emilio and Krazy-8 confront Walter White in the desert

Bad- Walt sees three strangers approaching in an old car.
Good- One of them is Pinkman. That’s a relief!
Bad- Krazy-8, a gangster, asks Walt to work for him.
Good- Krazy-8 offers a bag full of cash to buy his meth.
Bad- Emilio recognizes that Walt was with DEA and their natural instinct is to kill him.
Good- Walt convinces them to spare his life in exchange of his recipe of meth.
Bad- Walt learns that Emilio and Krazy-8 are going to kill him anyway. He has just bought himself some time.

Good- Walt attacks them with phosphine gas, ducks and gets out of RV.
Bad- Brothers fire bullets from inside that Walt barely manages to duck.
Good- Brothers choke and hit the floor. Walt and Pinkman are alive!
Bad- Krazy-8’s cigarette has set a bush on fire and the smoke trail can be seen within 5 miles.
Good- Walt manages to put unconscious Pinkman in the RV and runs from the scene.
Bad- Walt hyperventilates and crashes his van in the desert.

Good- Walt can leave a video message confessing how much he loved his family.
Bad- He’s gonna have to shoot the cops.
Good- There are no cops! The sirens were from the fire engine. They didn’t even notice Walt.
Bad- Walt has a left a gas mask there, a potential evidence that can screw him up in the future.

Both movie and TV have either romantic or buddy love subplots. Buddy relationship generally has three elements: an incomplete hero, his counterpart and complications. In Breaking Bad, Walter is the decision maker while Jesse is the troublemaker. Throw any obstacle at them and it’s gonna be fun to watch because they are always on the disagreement. They’ve to put their differences aside and work together to solve problems. In the initial episodes, a typical fun and games sequence would look something like this:

Walt asks Jesse to do something.
Jesse screws up and puts their lives in danger.
Walt uses his knowledge of chemistry to escape the life-threatening situation and saves their asses.

You’ve to watch 5 seasons to find out if Walt and Jesse will ever get along. The buddy relationship provides the unresolvable conflict on which TV series are built on. The clash of contrasting personalities also brings the much-needed humor to the series.

In every scene, the writer should ask- what is at the stake for the protagonist? Raising the stakes can make even boring scenes watchable.

A Chemistry genius being asked to wipe down tyres at a car wash is embarrassing. But what if you’ve got an asshole student (that you’ve set-up earlier) taking pictures of him while he’s doing that? That’ll destroy his self-respect.

Walt is not chased by any random DEA agent, he is chased by his own brother-in-law who is always around.

In the end, Walt is about to get shot by Krazy-8 and Emilio. How do you top death stakes? Walter is dying in a few months anyway. It’s not death that he fears. His fear is getting caught, his family finding out that he is a drug dealer and a murderer.

The key is to make it personal. We all know that the protagonist should never feel comfortable in a scene, you want bad things to happen to him. But if they don’t affect your protagonist on a personal level, the audience is not gonna care about it.

The job of the character description is to paint a picture in the readers’ head. I’ve seen some character introductions where the writer literally pauses the story to describe in a great detail the vague visual details, like what kind of glasses he’s wearing or what is the color of her blouse. They often use adjectives like attractive, handsome, well-tailored. There is nothing wrong with describing the physical aspects of a character that is filmable. The problem is, the reader gets lost in unnecessary visual detail that has nothing to do with the plot. Even after reading one whole paragraph they have no idea who the character is.

Skyler- Skyler’s cute in a way most guys wouldn’t have noticed back in high school.

Walter White- Forty years old. Receding hairline. A bit pasty. He’s not a guy who makes a living working with his hands. He’s not a guy we’d pay attention to if we passed him on the street.

Hank- A big, barrel-chested man with a bourbon in one hand. Hank is everything Walt isn’t: bold, brash, confident.

Notice how effectively they manage to paint a picture in your head using few words. Writing a good character description is an art and Vince Gilligan is a goddamn artist.

Click here to watch the detailed structure breakdown of the Breaking Bad pilot.

Let us know in the comments what screenwriting lessons you’ve learned from the Breaking Bad pilot.