Is There Anybody Out There? Sundance Review: We humans broadly share the pre-conceived notions and precepts of morality – of what is normally and socially regarded as proper conduct. So much of how society responds to these cues are highly intermingled with our own conditioning. However, there is no reason to believe that these notions and precepts should fully converge and cohere between different people and communities, or even in the minds of the individuals themselves.

“People aren’t born with prejudices, it’s learned,” says the narrator and director of the inspiring documentary, “Is there anybody out there?” – Ella Glendining. Diagnosed with a rare condition called ‘PFFD’ – Proximal femoral focal deficiency – the documentary is about her personal journey as she meets people with similar body types and discovers her true calling.

Through intimate personal diaries, conversations with people from various backgrounds, and even one-on-one heartfelt conversations with doctors treating her condition, this heartwarming film ultimately explores Glendining’s search for a unique perspective on life.

In the documentary, which is screening in the World Cinema Documentary Competition at Sundance this year, we get conventional interviews with the filmmaker’s mother, but they all go to unexpected places. By asking the woman who birthed her difficult questions about her outlook on the condition, Glendining contemplates and eventually comes to terms with her own pregnancy.

The film is shot from her perspective over the years, as we see her rich outlook on the world come together with her own coming of age. On the surface, these might seem like two separate stories – one dealing with her own disability and the other one about her son’s birth. However, as Glendining proves with snippets of telling interviews, both of them are inherently intertwined in speaking volumes about an individual’s lived experience.

Throughout the film, there are hints about the deeply bigoted signs of ableism that she and many others like her surround themselves with. Still, it is not until the final few minutes that the impact of it is fully realized. 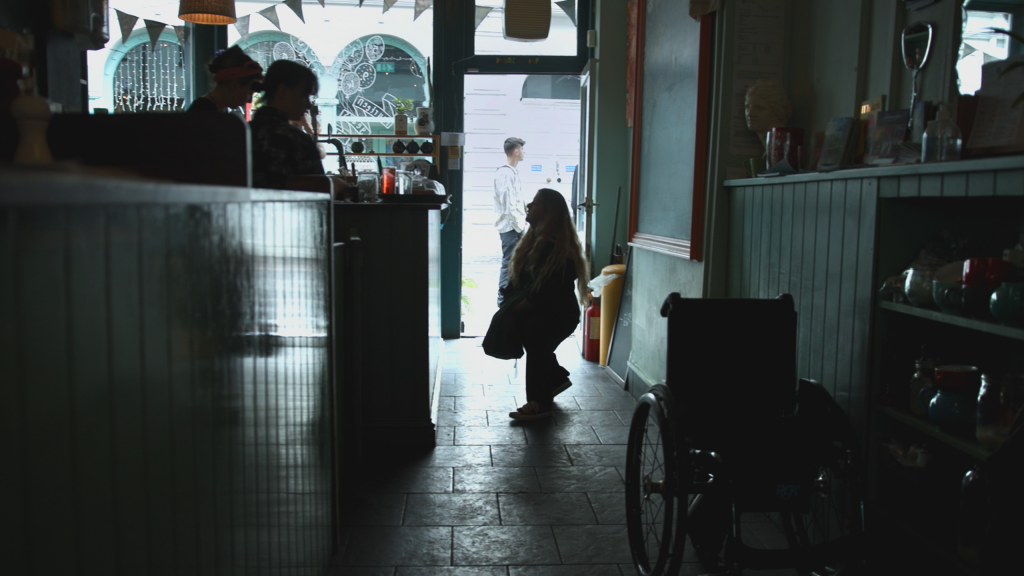 Glendining is not only a well-known actress, but also a documentary filmmaker who has appeared on stage in short films. Not only that, but she also directed the 2018 short film “Born.” With this documentary, the filmmaker seeks out anyone who has lived in a body similar to hers and speaks candidly with them about their personal experience.

With this choice, she naturally approaches the subject from a place of intimate knowledge that gets only more viscerally palpable the more you get to watch her life. By attempting to deconstruct the vile origins behind slang such as ‘midgets’, Glendining goes on to say something much more piercing about the day-to-day grammar we use.

The bilateral condition in her legs doesn’t stop her from reaching out to people with such varied conditions because it’s only through the acknowledgment of this wide array of conditions can get to the common thread that ties us all to the human experience. An autistic woman she visits from afar describes her condition as a “invisible disability,” and how those around her tend to minimize it without understanding its nuances.

During this section of the film, the two women discuss their experiences with ableism while sipping gin on a windy evening. Glendining admits to the young autistic woman that she, or anyone else, could never understand how someone else might feel in their body. It’s also at this point that Glendining’s initial desire and goal of finding someone with the same body and lived experience is reduced to a rhetorical purpose.

It only makes sense then why she chooses to end the documentary by accepting how it’s in human nature to feel shocked by someone who looks really different. Instead, it’s what one does next that matters. The realization comes rushing to her after having seen her childhood doctor again in yet another moving scene from the documentary.

At a point in “Is There Anybody Out There?”, a person refers to the year 1981 as being the first year where disability rights were recognized internationally. It was the year designated by the United Nations as the International Year of Disabled Persons, but there are plenty of other glaring political mishaps the documentary doesn’t shed light onto.

For instance, in the U.S., differently-abled people still don’t get enough marriage equality, and the person getting married to one such person even loses crucial lifesaving health care and benefits from the government. Although there’s a restraint at getting into the systemic politics of it all, the filmmaker uses the personal to reflect how the notions of ableism, as well as racism, sprout out of the same tree of bigotry; one cannot be an anti-racist without being anti ableist first. It’s all about how society responds to these cues and how we all can collectively work toward creating a more sensitive environment around us.

Is There Anybody Out There? was screened at the 2023 Sundance Film Festival

Is There Anybody Out There? Links: IMDb