Gravity Analysis: I think the hardest thing in life is to let go. The ability to move on from certain traumas of life is an inescapable void that often hinges on strands of memories. It pushes you into the same sequence over and over again and all you can do is relive it a thousand times over. The only way the body perceives the process of healing is through ‘keeping busy’ and getting used to the crowd again. But, the crude reality is that silence – which also magnifies the trauma can be the only possible healer in some cases.

In Alfonso Cuaron‘s ‘Gravity,’ Dr. Ryan Stone (Sandra Bullock) has lost her child in a matter of split seconds. So, when the first signs of debris nudge her out of her space station, the act of drifting away serves as a metaphor for her reality on earth. Since she is drifting away with no signs of trying to figure out a way to live, we only see her anxiety. She quickly starts using up her Oxygen until she is calmed down by the super-chatty Matt Kowalski (played by George Clooney).

While I am not too eager on the umbilical cord metaphor that has been used by multiple analysis’ over the internet, I do agree that the cord that is literally attached from Stone’s stomach to Matt serves as a reminder of her inability to let go. This is meant to be a representation of her attachment to anything that doesn’t let her face the world alone. So, when Matt has to leave her alone, she is confused, disoriented as to how to perceive herself and the emotions she is feeling because of all the silence around her. 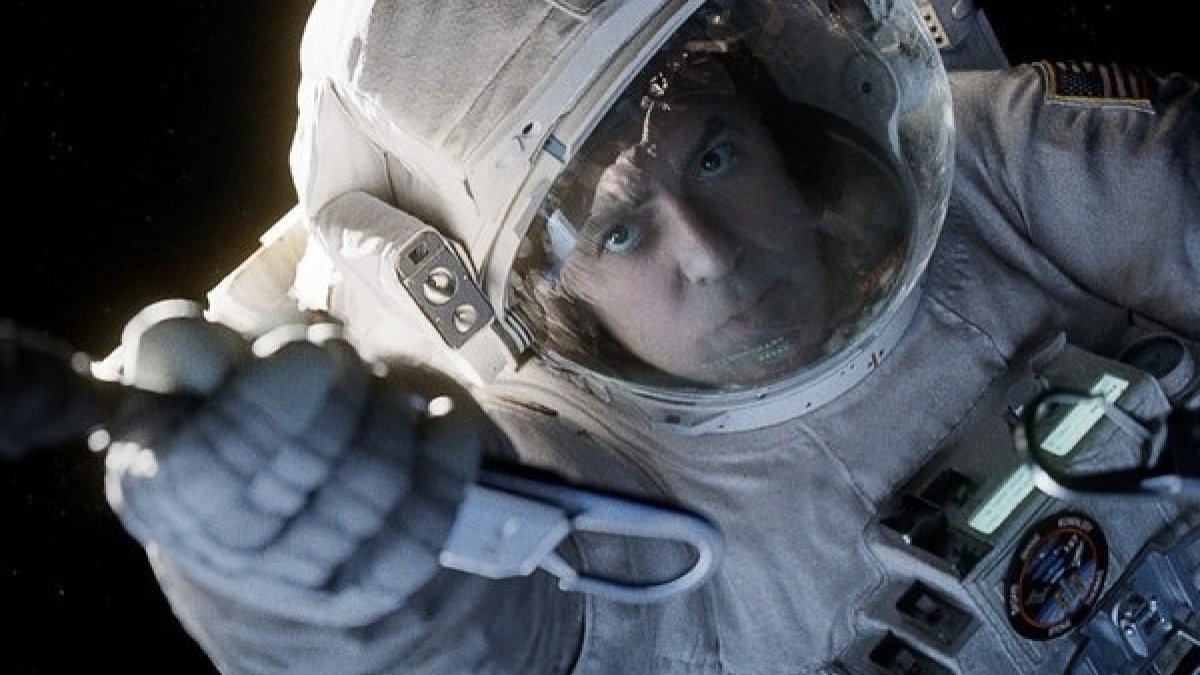 She has never been too talkative but because she needs to learn how to live with herself, we see her understanding why Matt keeps the feelings out by either drawing them in music or with his tales of someplace nice. She understands the value of the silence as both a healer that makes her survive the space around her and a teacher that lets her know that she has to understand how to ‘let go’ of her inhibitions so as to really operate in the world.

The symbolism of the Christ – wherein Stone has an almost otherworldy euphemism before resurrection in the escape pod hints towards the suddenness of realizing that one has learned to let go and survive. Acceptance doesn’t come with grand gestures and that is exactly why in spite of a melodramatic tale about Stone connecting to a random radio signal, Gravity manages to send it’s subtext across. The last leg of the film is filled with Hollywood-styled inspirational background score and a triumphant return to a place that she can call home, but Curon’s sharp eye for the character’s motifs doesn’t dilute the overall impact of grief on a person. That grief can serve as a savior that builds you up for the life that is going to happen thereafter.

It is also interesting to notice how in spite of a survival narrative that doesn’t give space for any character development, we are made to empathize with Stone and her loss. We know exactly what kind of person she is back on earth and why she is so to the point with the things she says here in space. Faith plays a very important role in Curon’s film and the impact it will eventually have on the person watching it. As much as it is about science and the horrors of space among the illusions of grandeur, it is about a person’s ultimate inclination towards faith.

The euphemisms of Matt coming back as a guardian angel before Stone has lost all her faith can be seen as a mere tool, but it is also a universal entity that shows how in spite of our dejection of life and all it’s suffering, we humans are bound to have the feeling of survival deep down somewhere. Her loss thus becomes her faith in humanity. An arc that is supposedly quite fragile if you look at it on paper, but is uplifted to a greater extend by Sandra Bullock’s incredibly nuanced performance.

This, however, can’t be based on her performance alone. So Buddhism and its philosophy also push the film in a wiser light. The very reason that life is too short for regrets and that the togetherness humans have in their suffering is reason enough to want to survive. So when Stone finally reaches earth there’s a new person inside her who has left all her suffering, pain, and regret in the void of space. All she now has is a will to live with the memories of her daughter pushing her towards greater things. The rebirth here is literally shown as she crawls out of the sea to finally stand up. This is one of the reasons why Cuaron’s film is not just a spectacle that shows us the beauty and horrors of space but also a survival tale and a tale about grief.

Labyrinth of Cinema [2020]: 'Fantasia' Review - An experimental swan-song about cinema that doubles up an anti-war statement