Home»Articles»25 years of The Shawshank Redemption: A Film About ‘Hanging In There’
Articles/Essays

25 years of The Shawshank Redemption: A Film About ‘Hanging In There’

When one decides to watch some of the greatest movies, the first place they would visit to get an idea about such films would be the IMDB 250 list. The first film that would catch their attention would be ‘The Shawshank Redemption.’ It did catch my attention partly due to its numero uno status, but also due to me hearing about it many times when I asked my friends to suggest some incredible film.

It’s general release date of 23rd September too caught my attention as I share a birthday with the film albeit in a different year.

The Shawshank Redemption which premiered at the Toronto Film Festival on 10th September 1994 was released to the general public two weeks later. It is quite simply a prison drama about two friends. This simple story is elevated by its cinematography and its abundance of metaphors. These metaphors can be likened to the story of religious journeys or one can see metaphors of their daily life play out where we are the ‘Andy’s’ in our story.

It is a film that thrives as it meanders along and helps us appreciate the meaning of having and not losing hope, no matter what.

Critic Roger Ebert has called ‘The Shawshank Redemption’ an allegory for maintaining one’s self-worth when placed in a hopeless situation. That statement holds with this prison drama which sees Ellis Boyd Redding a.k.a. Red (Morgan Freeman) tells us the story of Andy Dufresne (Tim Robbins). It is a simple story about a banker who receives two life sentences and his time at Shawshank prison over the next two decades. The dingy cell and the sound of the cell gate slamming shut with Morgan Freeman saying-

“The first night’s the toughest, no doubt about it. They march you in naked as the day you were born, skin burning and half blind from that delousing shit they throw on you, and when they put you in that cell… and those bars slam home… that’s when you know it’s for real. A whole life blown away in the blink of an eye. Nothing left but all the time in the world to think about it.”

combined with soft music in this sequence where Andy is marched to his cell gives the audience that feeling of dread as we empathize with, “the fish.”

This film has nothing happening apart from showing us Andy’s life in prison and does seem boring. This is akin to how mundane life feels at some time. We do things daily and go on doing the same thing. It all seems unspectacular, but what we don’t see are the little things that are done that will help us in the long run. 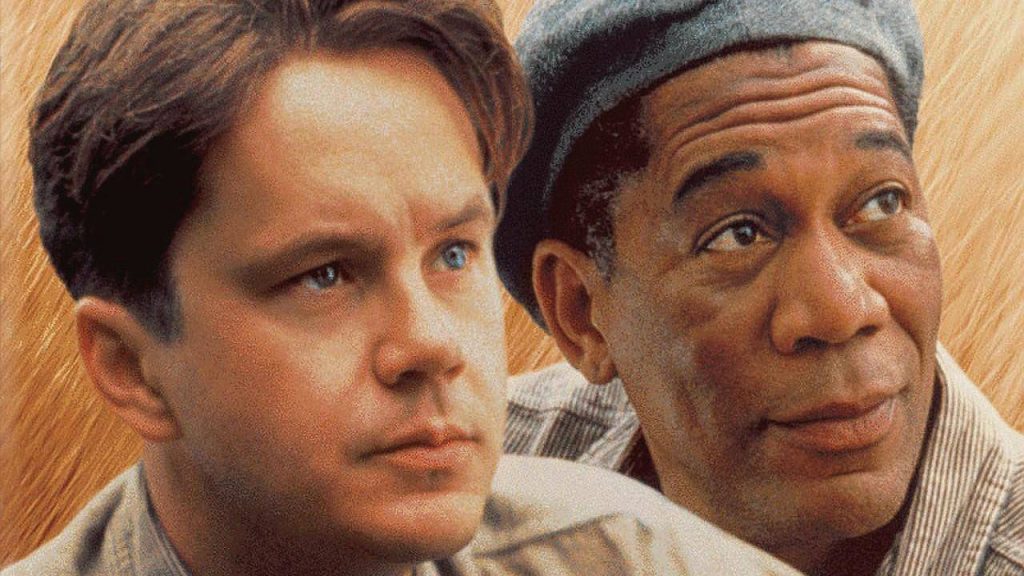 Andy maintains his innocence amidst a running joke at Shawshank that everyone is innocent and is in their current predicament just because their lawyer fucked up. This is a place which can be viewed at akin to how institutions are viewed: Walls to keep one in, guards and the warden represent the authority who seek to use you for their benefit and sanction you when you wish to avail of a favor from them for a few years of good work. This is seen in the film where Andy earns favor from the prison guards to keep ‘the sisters’ off his back in exchange for him helping out the guards and the warden with their financial matters. He is then tossed into solitary when he approaches the warden with exonerating evidence.

Many people tend to switch this film off midway as it all seems like a flat downhill drama. I remember struggling to watch this film in high school. Did I finish it? Yes, and I was so thankful for not quitting.

When life throws us in a hopeless situation, we fight for a while before getting overwhelmed and allow ourselves to be swept away by the tide. But Andy didn’t do so…..and we still don’t see what he is up to.

He doesn’t lose hope. It is so exhausting to battle and persevere and continue doing something with no light at the end of the tunnel. To slowly chip away at something to reach the point where we will see the light, to do so without getting deterred. Imagine having to do so without adequate resources. This is exactly what Andy does and when all hope seems lost and we are led to believe he will end his life, the final reveal emerges. It shows us two decades of toil Andy undertakes as he digs a tunnel through concrete, crawls through it before breaking a sewage pipe and wading through shit to be free of Shawshank.

Turns out that all the time he spent in prison and all the work he did was not for the controllers within the institution, but himself. He had planned this all along and only after 120 minutes after being bored and led to believe that Andy is going to end it all we see the fruits of Andy’s years of struggle. He respects the institution and makes inroads into his future outside the prison as well as ends the corrupt system from within akin to the Trojan Horses.

Cinematographer Roger Deakins frames that iconic moment of triumph in an exquisite manner in our screens. We see the scene from above as Andy kneels on the watery ground and exults at his successful escape. Had Cinema Paradiso released a few years later it wouldn’t have been remiss to see that iconic frame in that film. Andy Dufresne never let his situation overcome him and countered Red’s iconic:

“Hope is a dangerous thing my friend, it can kill a man,” with, “Remember Red, hope is a good thing, maybe the best of things, and no good thing ever dies.”

Reading up about this film educated me about the fact that it wasn’t an audience darling at the time of its release. The title alienated some, whereas there wasn’t that star power to attract the audience. Even now if I say the name Tim Robbins (who played Andy Dufresne) casual movie fans reply with a, “who”, or “never heard of this guy.” 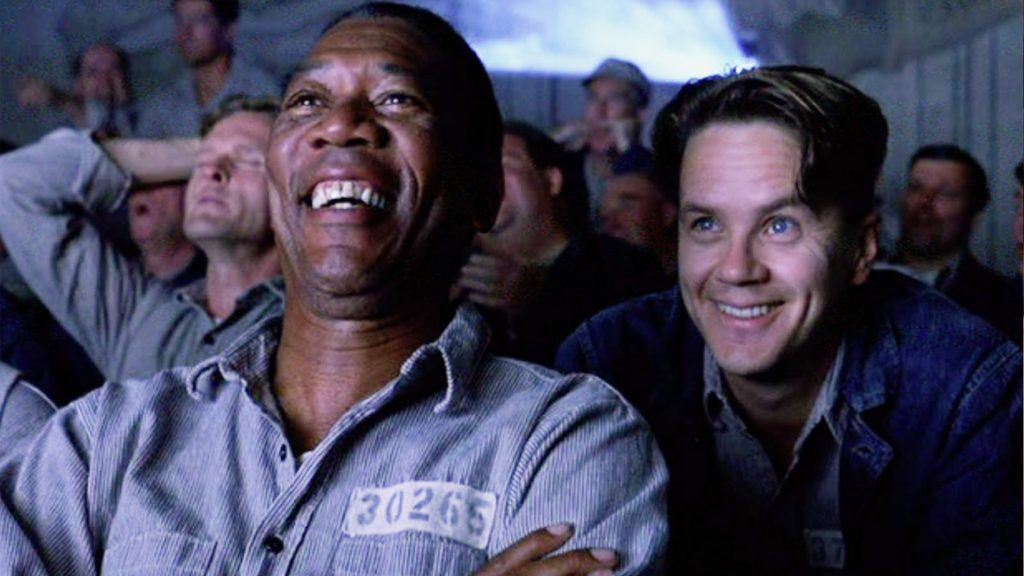 Morgan Freeman is recognizable primarily due to us being able to say he acted as Lucius Fox in The Dark Knight Trilogy. A prison drama would have led to many imagining a bland film focusing on n number of characters in prison and their equations with the lead and a few other prominent characters before that lead eventually is released. But it is not so.

Agreed that it is a prison drama and it is slow and has the potential to make people switch off the TV and watch something, “more entertaining.” The Shawshank Redemption is not a movie to entertain, but it presents us with metaphors and drains our hope completely before that ending for the ages which makes me recommend it as a feel-good movie.

Rarely has a film managed to be such a feel-good film in a manner such as The Shawshank Redemption has.

People who have found it tedious to sit through this 142-minute drama have asked me what fun I’ve had by trying to make them do so, “I’ve switched it off after an hour,” is what they told me. Fools. This film is a reminder to audiences and critics alike to not judge a film based purely on a small part of it but to consume it as a whole product.

Related to The Shawshank Redemption: Why Do We Love Movies?

As I began watching the Oscar ceremonies and reading up on past ones I wasn’t surprised to see this film feature in multiple categories. The fact that it didn’t receive the top prize sees it constantly feature in lists paying homage to the films that were robbed at the Oscars. (no disrespect to Forrest Gump)

This film too had a journey like Andy. It received hate, but eventually, over time, it rose and redeemed itself through word of mouth and re-release and continues to be a cult favorite even 25 years to the day of its release. The Shawshank Redemption Redemption perhaps?

Imagine a person who watched this film on 23rd September 1994 or elected not to watch it due to its synopsis or lack of star power. Imagine that these individuals chose to badmouth this film. There is a quote from this movie for all those who tried to cage this film and prevent it from soaring and maintaining its status.

“I have to remind myself that some birds aren’t meant to be caged. Their feathers are just too bright. And when they fly away, the part of you that knows it was a sin to lock them up does rejoice. But still, the place you live in is that much more grey.”

Of course one could blame this film’s poor initial theatrical performance due to its premiering the morning after a sitcom featuring 6 friends in a cafe aired its pilot episode. Its competition against movie stars like Tom Hanks(Forrest Gump) and Bruce Willis (Pulp Fiction) could be another reason. 🙂

Now even 25 years later despite things being so different in the world at that time, the metaphorical messages can serve us well in the present day as we hope for that one glorious moment. Let’s all get inspired by Andy and this masterpiece to make the best of a bleak situation and never give up. Can you name another film that takes you through the emotions like Frank Darabont’s masterpiece?

Love Me Tender [2019]: 'TIFF' Review- Agoraphobia and the World Within

25 years of The Shawshank Redemption: A Film About ‘Hanging In There’