Alfonso Cuarón’s Roma has earned universal acclaim, being lauded as ‘the best film of 2018’ by film critics, Hollywood celebrities, and basically everyone. It’s leading the Oscar race with whopping 10 nominations. The hype surrounding Roma was insane. It was declared ‘a bonafide masterpiece’ before it even reached to the audience. It’s dangerous when a film attains this level of greatness, when it becomes too sacred to be criticized.

The question is not whether I like Roma or not. The question is- am I even allowed to dislike it? How can I possibly say anything bad about Guillermo del Toro’s Top 5 film of all time? Moviegoers are under tremendous pressure to appreciate Alfonso Cuarón’s Roma. The reason why everyone is applauding it is because there is no other option. If you decide to criticize Roma, you’ll be deemed a cinema illiterate who has no right to comment on movies. Why is it that when you criticize a film, people question your credibility, but when you praise it, no one questions? No one asks- Who are you to appreciate it? What have you made? Even the most negative reviews of Roma start with a defensive statement like ‘Cuarón is a great filmmaker’ or ‘Y Tu Mamá También is my favorite film’. Roma has become a cinephile equivalent of ‘Bhai ki Picture’. The fans believe that the picture is perfect, and if you don’t enjoy it, something is wrong with you.

Almost every review of Roma mentions how it’s a deeply personal film. Well, isn’t every film personal? There is nothing wrong with Cuarón telling a story of his nanny (named Cleo in the movie). However, the movie doesn’t show his interpretation of the events, we see it from the perspective of Cleo. He tries to show what ‘he thinks’ Cleo was going through based on ‘his’ memories of childhood. It’s like looking at a family picture and describing what a family member was thinking when the picture was taken without acknowledging that you were also a part of it. He shows us what the children meant to Cleo but never shows what Cleo meant to the children and family.

To make things worse, Cuarón shows a very dramatic scene of Cleo giving birth to a stillborn, a very personal and tragic event of her life that he didn’t even witness. In ‘Grizzly Man’, Herzog had access to the tape that captured the gruesome death of Timothy Treadwell, the subject of the documentary. He decided not to disclose it saying, “There is such a thing as privacy and the dignity of your death … Sometimes it is better to have a question with no answer.”

Cuarón maintains emotional distance from the subject matter. The camera never closes, it’s always distant, sweeping across the landscape. The film is shot in stunning black and white. Everything looks beautiful, every shot is precise, almost too perfect. It looks staged, and, at times, it feels like the film is over-directed. The soundscape of Roma is incredible. Listening to it in the theater is a very immersive experience. Cuarón overkills with the elaborate sound design. In every scene, you can hear the minute sounds of distant chattering, the buzz of cicada, dogs barking. After a point, it feels like he’s just looking for an opportunity to capture the sound of water dripping. If you watch the trailer of Roma, you’ll notice how the use of background music (Pink Floyd’s The Great Gig in the Sky) elevates it.

Cuarón takes his craft seriously. He’s a skilled technician but not so much of a storyteller. He is so lost in capturing the reflection of a flying plane on the wet floor and recreating the buildings and streets from his childhood that he forgets to put real people in it. If you remove all the craft and judge Alfonso Cuarón’s Roma solely based on writing, it’s quite underwhelming. But when you’re Alfonso Cuarón you can write a boring movie and still earn the Oscar nomination for Best Original Screenplay. 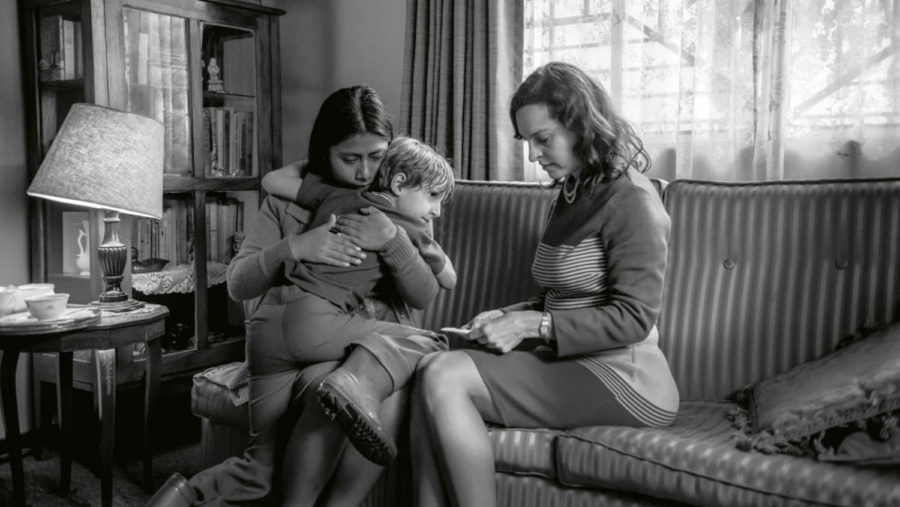 The underlying message of Roma is that ‘men will always abandon women’. Both Cleo and the mother are left alone by their respective partners to take care of their children. While the film focuses on the feminist aspect, it completely ignores the class dynamic. If Green Book was ‘white man talking about racism for white people’, Alfonso Cuarón’s Roma is essentially ‘bourgeois talking about the suffering of poor for bourgeois’. It’s lip service. After an emotional scene where Cleo risks her own life to save the drowning kids, the mother commands her to make smoothies as if what she did was a part of her job. Despite saving the lives of her children, she’ll never be treated like equal. In the end, Roma just celebrates a maid for being maid.

It was very bold of Netflix to invest in a black and white Mexican movie. But, to be honest, they invested in Alfonso Cuarón, who won 2 Oscars in 2014 for his film Gravity. Mexican directors have been winning Oscars for the last 4 years. Academy has a good number of Hispanic members who are more likely to vote for Roma. There is a scene in Roma where children are watching 60s Sci-fi movie ‘Marooned’ in a theater. The shot of two people floating in the space is reminiscent of Cuarón’s film Gravity. The scene is strategically placed in the movie to subtly remind us that we’re watching a movie from the director of Gravity. According to the reports, Netflix has spent over 20 million dollars on the Oscar campaign of Roma, making it the most expensive campaign of this decade. The universal praise for Roma is also a result of good marketing.

More than the movie, I’m disappointed in so-called cinephiles who blindly praise the movie because others did. Don’t let Rotten Tomatoes, Metacritic or even Guillermo Del Toro decide how you feel about a movie. I’m not saying you cannot love Roma. All I’m saying is, it’s okay if you don’t like Roma, you don’t have to pretend.