Am not sure what director brothers Adam Nee, and Aaron Nee had in mind when they first started making “The Lost City.” To me, it felt like it started off as a prank, where one of them might have suggested an idea of roping in Brad Pitt for a super-cool cameo as a sexy, undercover guy named Jack Trainer in what would essentially be an unofficial remake of Robert Zemeckis’ gleefully pulpy but wholly watchable action-adventure “Romancing the Stone.”

Then, they might have decided to cast the super-dashing Channing Tatum to play out an extension of his dumbfoolery from the Jump Street movies, and Sandra Bullock as well, Sandra Bullock from all her 90s movies. The result would make a fairly entertaining movie that would glide along on their chemistry alone. However, what we do get here is an over-stretched, unfunny, and terribly written film that doesn’t know if it wants to be a treasure hunt adventure, a reworking of the damsel in distress trope, a moving-on from a grief tale, or a rom-com that ends with a kiss.

Anyway, Bullock stars as Loretta, a reclusive novelist who writes these pulpy treasure hunting adventures that are less treasure hunting and more of a sexually charged romance between Angela and Dash (the main characters from her book). We meet her first in the midst of her frustration as she dodges her agent Beth’s (Da’Vine Joy Randolph) calls to finish the final chapter of her new book. We get to know that it has been 5 years since her husband passed away, and instead of moving on, she has decided to limit her interactions. 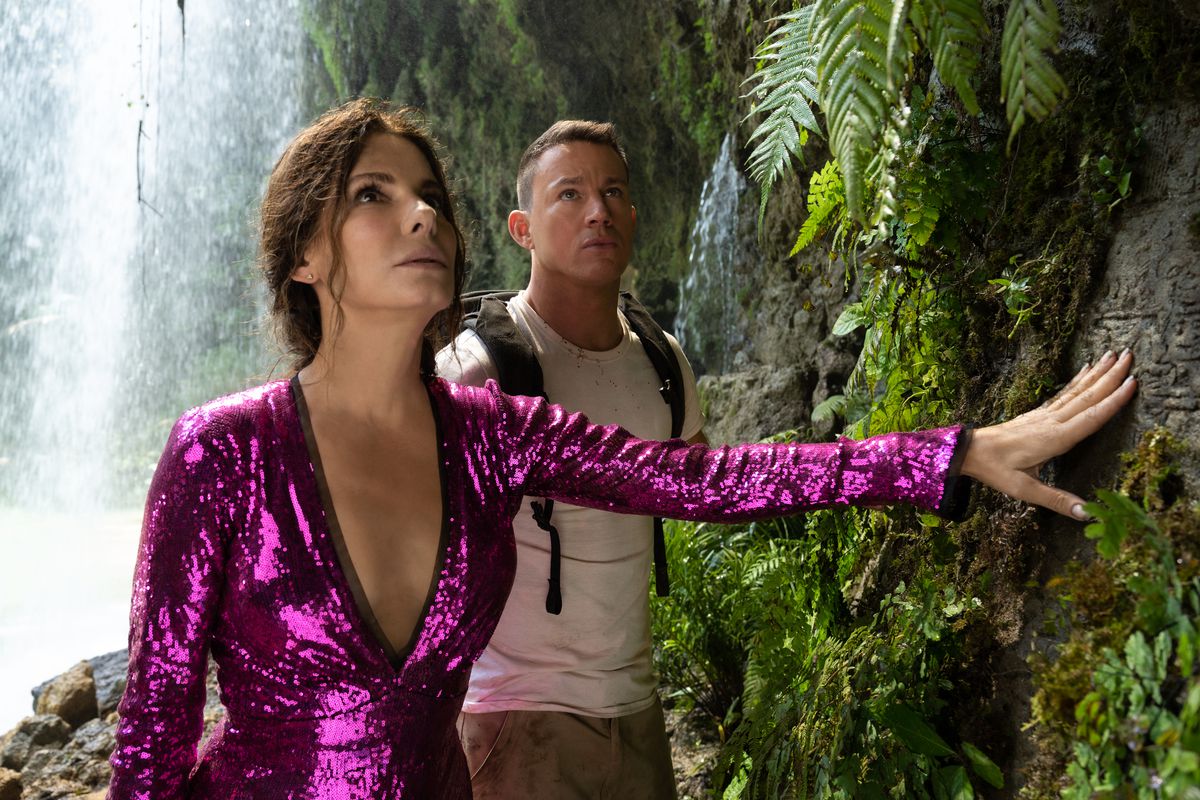 This is why, a book tour that involves interacting with people in a body-hugging-sparkly-jump-suit-dress, has to be the last place she wants to be. However, when there, we also meet Dash (basically Channing Tatum’s Alan donning fake blond hair), who apparently has a thing for her, but is unable to connect because of a sort of intellectual shield that Loretta has built around her. Alan, who considers himself dumb is unable to traverse around that.

But, before things could get sex-cringe, Loretta is kidnapped by some hoodlums who apparently work for Abigail Fairfax (Daniel Radcliffe). Please note that this character makes sure to tell us that this is a gender-neutral name and that you are not allowed to make fun of it (Me: It’s 2022, and no one is making fun of it anymore). Anyway, Abigail tries to reason with Loretta about a piece of key information in her book that might help him find some sort of hidden treasure, but Loretta, who has left reading cryptic messages since her husband died, is reluctant and uptight. So, our baddy decides to drug her (note that this character likes cheese for no reason whatsoever) and fly her to the middle of the Atlantic.

Parallelly, Loretta’s assistant, her newly appointed social media manager (Patti Harrison in a completely wasted role), and Alan decide to take things into their hands without consulting the police and hire Pitt’s character to save her from whoever has kidnapped her. Now, most of whatever happens in pretty by the numbers action adventure and I would like to stop here and just point out what works for the film. 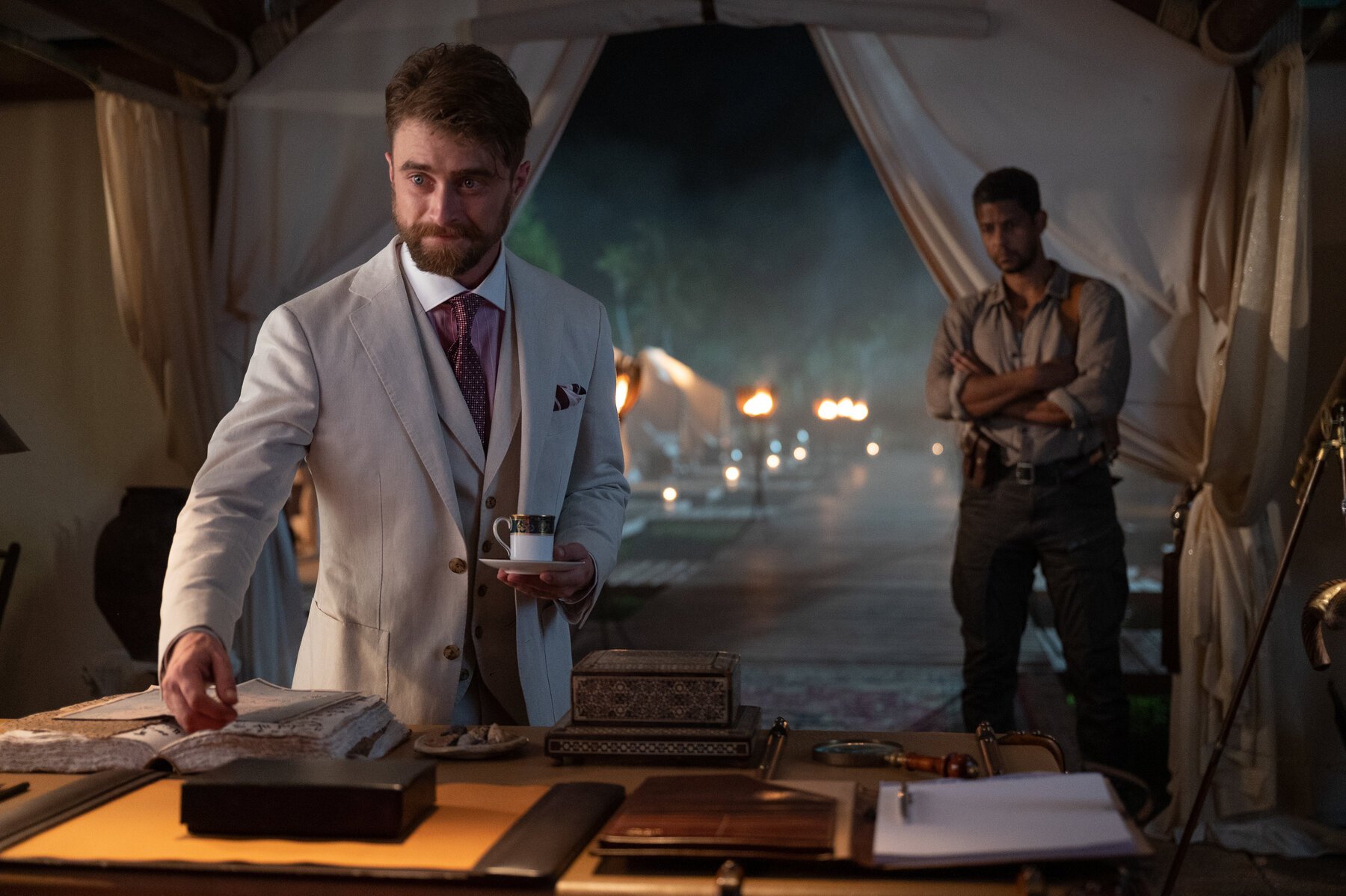 Personally, I enjoy a really straightforward Hollywood adventure film. But, if that said film doesn’t know how to land its jokes, make the adventure interesting, and allow the charm of its stars to make it work, I won’t hold back my criticism. To put this plainly, Brad Pitt, who shows up in an extended 10-odd minute cameo is the only saving grace of this dumpster fire of a film. Most of all, this is a perfect setup for a hilarious ride, but the jokes feel like they have been stored in a broom closet for 20 years, and only now have the directors discovered that they might just make some A-listers say it and make it work.

There are a few chuckles here and there, but mostly The Lost City is a ‘lost’ cause that is so eager to move forward that it keeps plunging into its stars’ chemistry, cutting them in the midst of genuine moments by introducing another element that doesn’t stick. Apart from the really stale script, the editing does more damage to the film than anything else.  The camera never stays on the characters when they are having, or about to have a good laugh. Hell, it even cuts to a parallel and uninspiring plot of the agent coming to get her star, making all the conjured energy of Tatum’s stupidness feel like it was all for nothing at all.

Overall, The Lost City is a film that is best enjoyed only with a tub full of popcorn and movie-geek companions who can point out how fucked up the post-production would have been. For everyone else, it would mean that they are paying the price of a ticket only to see Brad Pitt enter and exit the frame in less time than they take to chew through their hotdogs.