It’s always a joy to see female filmmakers on top of their craft. With their gaze and captivating skill, they bring an energy that is extremely difficult for a male filmmaker to top. Director Julia Hart has had only a brief career in the film so far, but her filmography has been propelled by a peculiar voice. She is back to business after her female-centric superhero movie Fast Girl (2018), this time with a glossy escape thriller I’m Your Woman. And not only does she turn all the gloss and shine upon its head, she neatly subverts the entire gangster-on-the-run genre on its head. Delivering a legacy that demands to be buttressed.

It’s the 1970s. Jean has already had quite an eventful day. Her husband, the dreaded mobster Eddie, gave a baby into her arms and told her that it is their henceforth. In the middle of the night, a black man picks her and the baby and drives them to a motel, declaring that Eddie has escaped. The rest of I’m Your Woman deconstructs this build upon how a woman’s life is turned upside down, and how she makes sense of the chaos by blending herself into it. It can also be read as the origin story of a female gangster. Or a lyrical and impassioned ode to what goes into the process of motherhood.

On the surface, Julia Hart makes sure that the film feels like each of these- in her thrilling character study, Jean is everything from a mother to a wife and a complete champion of guns- or simply a woman. But at another instant, the film is a cinematic subversion beyond the obvious. For long, we have been subject to stylishly effective gangster dramas. They are often about a dreaded mafia, his allies, his hitmen, the Shakespearean betrayal he faces, the love and marriage and ancestral lineage as well as how history repeats itself. The common criticism for most of these films has been their lack of representation when it comes to women or a cultural/racial minority, often completely so. 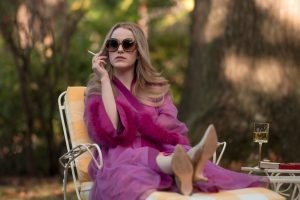 I’m Your Woman certainly has a gangster on an escape from his rivals as a crucial backdrop but it is his woman- Jean- who serves as the frontrunner and the entire drama unfolds from her perspective. The vital supporting characters- Cal and Teri, are from the black community, portrayed without any judgment or message. Perhaps the best part of the solid screenplay- written by the truly gifted Jordan Horowitz and Julia Hart- is that it doesn’t give a fuck about the morality of the proceedings. The rampageous shootouts are approached with extreme randomness. And yet, the sentimentality associated with them is nothing short of moving, adding to the flair.

The slow-burn cinematography by Bryce Fortner is brimming with deceptive mastery and beauty, fitting for the stylish 1970s setting. The editors Tracy Wadmore and Shayar Bhansali sleekly pack the linear narrative. The indulgences are entertaining because the writing is mature enough to instill a sense of place, time, space, and complexity into a crowded narrative. However, the performances are the driving force of I’m Your Woman. As Jean, Rachel Brosnahan delivers one of the most brilliant acting performances of the year. Also worth mentioning is Arinzé Kene as Cal and Marsha Stephanie Blake as his wife Teri. While the men blend competently, it is these two actresses who elevate the film with their fluidity, charm, and bluntness.

At 2 hours, the film keeps you guessing throughout. The condensed narrative choices never fail the bigger picture. But there’s an inherent lack of soul in some of the film’s sequences. For example, the climax, while sober in mounting, could have been a major selling point, feels like a huge letdown. Nonetheless, I’m Your Woman works. It’s a hugely transparent thriller that scrutinizes its uncertainty with a sharp female gaze.

Il Maestro By Martin Scorsese: Federico Fellini and the Lost Magic of Cinema