Jugjugg Jeeyo (2022) Review: “Maine hamesha apni khushi ko rishton se zyaada importance di. Aaj na khush hun, aur na hi rishte bache hain. Tu aisi galti mat kariyo, Kuku. Be a better man than me. (I have given more importance to my happiness than to relationships. Today, I am neither happy nor do I have relationships left. Do not commit the same mistake as me, Kuku.).” says Anil Kapoor’s character Bheem Saini at a crucial point in the film’s third act. I might have made a couple of errors in my recollection of the dialogue, but the expression is undisturbed. Jugjugg Jeeyo is ideologically averse to two generations, the Millennials and the Generation Z. With all its compassion and attempts to understand dysfunctionality in relationships, the film never rises beyond its skeleton of a propaganda statement by Gen X.

Gen X has experienced the most intense flux as the world emerged into a post-capitalist society, social density increased, and technology overwhelmed the human lifestyle. That generation felt its experiences rendered infeasible in a dynamic setting of evolving family structures and changing social attitudes. The crisis lay in the necessity to adopt more and reject less. Those who resist change are often the ones to wither away, as Bob Dylan once said. I observe a conflict here. My parent’s generation, the subject group of this discussion, perfectly assessed the requirement to be fluid even when they disliked it. They neither wanted to swim nor sink.

Related to Jugjugg Jeeyo – Elvis (2022) Review: A Great Biopic that’s both, a Hagiography and a Folktale

So they used the pretense of a floating tube and remained afloat. There is constant friction in the process. Their children, like me, refuse to carry the burden of their ideas and their normalized attitudes. But we do not want to leave them, as people, behind. Humans aren’t incompatible beyond the incompatibility of their social behavior. Our existence is a constant exercise in undoing past mistakes and promoting empathy as the driver of society in place of self-interest. I call this film a closeted propaganda statement by Gen X because it talks down to us, questions our ideas and behavioral attributes, and finds refuge in conservative complacency for the sake of “relationships.” Kuku, played by Varun Dhawan, and Naina, played by Kiara Advani, are childhood sweethearts who have married with the promise of a happy life. Five years later, they are stuck in a dysfunctional marriage with communication reduced to the bare minimum, and love went cold. They finally express their wish to divorce each other but postpone it until the marriage of Kuku’s sister, Ginny, played by Prajakta Koli. It is only revealed to Kuku during the wedding that his father, Bheem, wishes to divorce his mother, Geeta, played by Neetu Kapoor. With the prospects of two divorces looming in the same family amidst a wedding celebration, things start to go haywire, exposing how each individual failed in their respective roles.

But most importantly, Jugjugg Jeeyo wishes to confront the deceitfulness and chauvinism of men and how it destroys women in the process. Unfortunately, this is no Kapoor and Sons. Nuances have been substituted with sequences to create a comedy of errors, moral dilemmas are pushed to the periphery for loud drama, and people are denied their individuality in favor of compromise. Jugjugg Jeeyo could have been Kapoor and Sons but ends up becoming quite anti-thetical.

The consequences of one’s toxic traits linger for a considerable amount of time. It is tone-deaf when resolutions occur over momentary realizations. Promises made in the final moments without having complete growth via self-critical introspection are nothing but escape mechanisms. Such promises are false, but they are made to look true artificially. Progressiveness is only mimicked for value neutrality in some dialogues. And many discomforts are created in the name of family comedy via casual sexism. 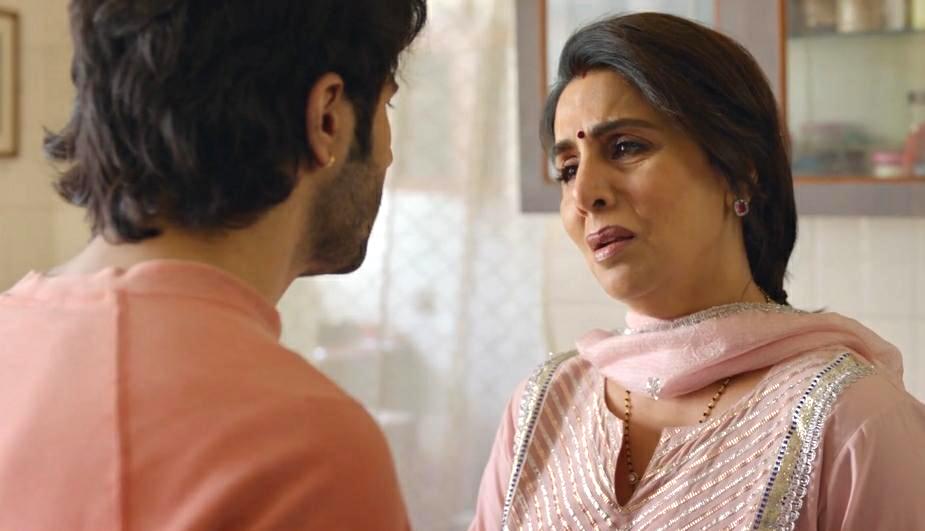 What is family comedy? What is this compulsiveness in Hindi mainstream producers to “provide” people with family entertainment? The cause is not wrong in itself, but its execution is an assault on the dignity of people in the promise of laughter. It is akin to saying that since you all neither have aptitude nor taste, we will serve you with what requires the lowest of our efforts, and you will still be enjoying a stressed world like ours. In times of scarcity, the bare minimum is pleasant. However, this isn’t natural scarcity but a manufactured one by our producers, much like how the perception of diamond scarcity was manufactured by a monopoly, which subsequently led to a rise in its demand. Jugjugg Jeeyo is demanded in the same way for excellent family time.

Varun Dhawan performs so horrendously in this film that when he and Kiara share a frame, Kiara looks like a dextrous actor by contrast. It is not understandable how he was/is quoted as an alternative to Govinda. The only two times Varun Dhawan actually performed were when he was not doing comedy. Kiara Advani gives the most respectable performance in the entire cast that has a veteran like Anil Kapoor. All the supporting characters are caricatures. Enjoying them is subject to one’s taste. I was mostly embarrassed.

In the end, Jugjugg Jeeyo chooses not to explore the dysfunctionality of modern relationships and gets obsessed with its need to induce cringe. I know it is a comedy film, but I cannot be made to believe that writing as a process is a compromise. It is not a rule that wisdom and emotional maturity must be sacrificed for humor. Despite trying to be earnest in some moments, I cannot overlook the morally corrupted nature of what the film argues in favor of, i.e. self-sacrifice and compromise for the stability of a bond. It passively villainizes an independent woman, Meera, played by Tisca Chopra in the worst performance of her career, so that “true” love can be defined. Jugjugg Jeeyo implies that true love is aimless servitude and fidelity. There are many uncomfortable arguments that the film makes.

Having noted my ideological reservations against the film, I would choose to mention that a few people around me enjoyed more moments in the film while I was embarrassed. Naturally, I would ask the audience to watch it and form their own set of thoughts. Who knows if you will end up enjoying the film too?