Ardh (2022) Zee5 Review: The Hindi film industry is a tough world to penetrate. The stories of struggles reverberate in the air of Mumbai, but we hear only of those who finally made it. Pankaj Tripathi graduated from the National School of Drama and moved to Mumbai in 2004. Going through multiple small roles as a junior artist, he finally secured recognition in Anurag Kashyap’s magnum opus in 2012. He has been quite vocal about his journey and is known for his humility. He credits his spouse Mridula Tripathi for supporting him in his struggle by taking charge of the financial obligations of their household.

Nawazuddin Siddiqui is another shining icon for those who made it through perseverance and dedication. Today, when we look back to late 20th century and early 21st century films and spot Nawaz in a blink-and-you-miss-it appearance, we feel a rush of excitement and admiration. In his sophomore appearance in Shool (1999), even his voice was dubbed. With a humble aesthetic appeal (common man’s look) and no network privileges, Nawaz has risen to join the ranks of the industry’s finest. But when I share the stories of struggle, I can only talk about these few “complete” stories that ran their course and met a successful eventuality. What do I know about thousands and millions of stories that were never told?

Related to Ardh – Zombivli [2022] ‘Zee5’ Review: A wild ride of a Zombie Apocalypse with a Social angle

Even if I see those stories being written before me, my mind is prohibited from viewing them as complete. If I think of my actor friends and acquaintances who wish to act in cinema, I see them performing the chapter of the struggle of their lives, and therefore, I fail to view anything remarkable, notwithstanding my admiration for their devotion and/or merit. So the question is, when do stories become complete? Are eventualities necessitated? Most struggling stories are close-ended with either this or that possibility. People either make it big or return a failure. The latter category has its own diversity. Failure isn’t one kind. Everything other than not becoming popular is considered a failure: choosing to return home, choosing to take a different path in professional life, choosing crime, choosing death, etc. A struggler has no functional agency. Perseverance is a virtue even if it wears out the assiduous. Quitting is an act of shame. 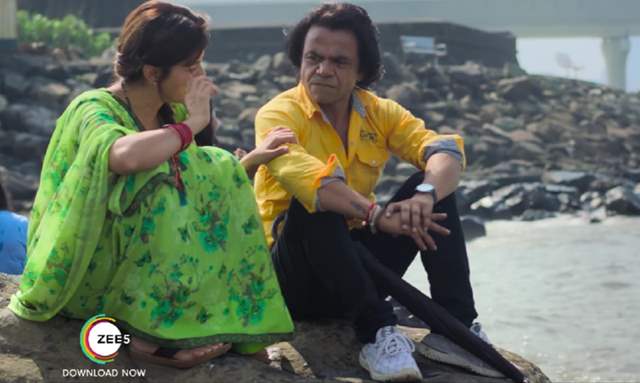 Palash Muchhal’s Ardh (2022) is a focused story about a struggling actor, Shiva, who has a family to feed. The attribute unique to this story is the struggler’s conventional physicality which is treated with hostility in the film industry. Rajpal Yadav is a 37 years old man with a height of five feet and two inches, undesired by those who create films. The film graphs a comprehensive journey through the actor’s insecurities, the industry’s apathy, and familial obligations. There is nothing that you haven’t known or seen before when we talk about such narratives but one thing. The film beautifully acknowledges the survivorship bias and doesn’t peddle a rosy narrative. This acknowledgment is grounded and important to register in a world that provides no room for those it terms unsuccessful. Unfortunately, this is the only quality of this otherwise loud film.

In an attempt to serve almost all types of challenges a character like Shiva naturally goes through, the filmmaker heightens the tone of conflicts and renders the film with a street-play-like appeal. For example, in a sequence involving Shiva buying vegetables, he is seen reiterating how expensive everything has become and rejecting everything he “needs” to buy after hearing the price. The realism is compromised because, in financially backward households, expenditures are planned. Now, this is a small sequence but not the only one in the duration of 80 minutes. Another big but cliche mistake is to make every other character hostile and rude to the struggling character. There is no nuance in the course of life. Empathy is not earned through the efforts of our protagonist but through the obstacles that are artificially created and aggravated by the cruelty of others. The dialogues don’t help either. They are not organic to circumstances but mere representations of the information that the filmmaker wishes to convey.

One would wonder that, given how character-centric the film is, there would be a performance of a lifetime by the lead actor. After all, so much of this journey feels personal to the actor himself. However, Rajpal Yadav seems to be coming from a school of acting that is boisterous and cosmetic. There are some earnest moments, sure, but they are overwhelmed by Yadav’s need to “perform” as dramatically as possible. It is quite hard to form an opinion about him in this film. Because he oscillates from natural actions to theatrics.

We, as people, are so starved of happiness and peace that success stories serve us with inspiration, notwithstanding our own social capital to be able to mimic the same. As a result, we look at the ones who made it, failing to take stock of the hundreds who didn’t. It is to this film’s merit that it chooses to be aware of survivorship bias. Another one would be the Zindagi song sung by Sonu Nigam and Rekha Bhardwaj independently. If only Ardh hadn’t succumbed to exaggerations in its screenplay, it would have established itself as an important account. Nevertheless, if you belong to the focus group of struggling actors, you will find this account relatable.