AK vs AK Netflix (2020) Review: The beginning of AK vs AK is built into a feudal end. Imagine going down a rugged slope that doesn’t let you slip but only after taking away the control of your velocity. You keep throwing your feet first to grab the ground beneath you and then to push yourself forward. An act of simultaneous defense and propense, quite paradoxical to the act of walking and yet propelled in the same fashion. AK vs AK mimics the same if cinema is a verb.

The film is suspended on the lever of expectations and it dares to take a bungee jump with it for the ditch below is unexposed. When Kashyap thrusts Kapoor into action by threatening him with a real-life danger, you do not find yourself in Kapoor’s wing to embrace the belief and feel threatened. You stay with Kashyap subconsciously as if you are a partner in crime. As if you helped Kashyap set the stage for this performance. As if you are a fly on the wall. Now, this implication might sound minor, and even an exciting emotional derivative of cinema verite but in the case of AK vs AK, it makes you restless and prevents a complete suspension of disbelief. Allow me to elaborate.

Every time you recognize the narrative as a thriller, you do so consciously, nudging your brain with the information that Sonam Kapoor has not been kidnapped in reality, and it’s all part of a plan. You never actually see the film as a battle between two men, two vulnerable men, and two men with egos. You always watch the film as a film being made by Anurag Kashyap as he captures Anil Kapoor looking for Sonam Kapoor which the former has hidden somewhere.

I am not saying that the aura and your awareness of the two men, performing before you, creates a barrier. If that were to happen, you would have viewed the film as a film directed by Vikramaditya Motawane about a filmmaker making a film by shooting an actor as he looks for his daughter, which has been kidnapped by the former. You don’t recognize Motwane’s arms moving the puppets, but you don’t recognize a director “kidnapping” an actor’s daughter either.

The suspension of disbelief is adulterated and it becomes an exercise to secure the same because it doesn’t happen. The issue is, the agency doesn’t reside with the audience. They can never make a decision on the same. It is only in the hands of the filmmaker, provided he/she/they is willing to do so and to what degree. 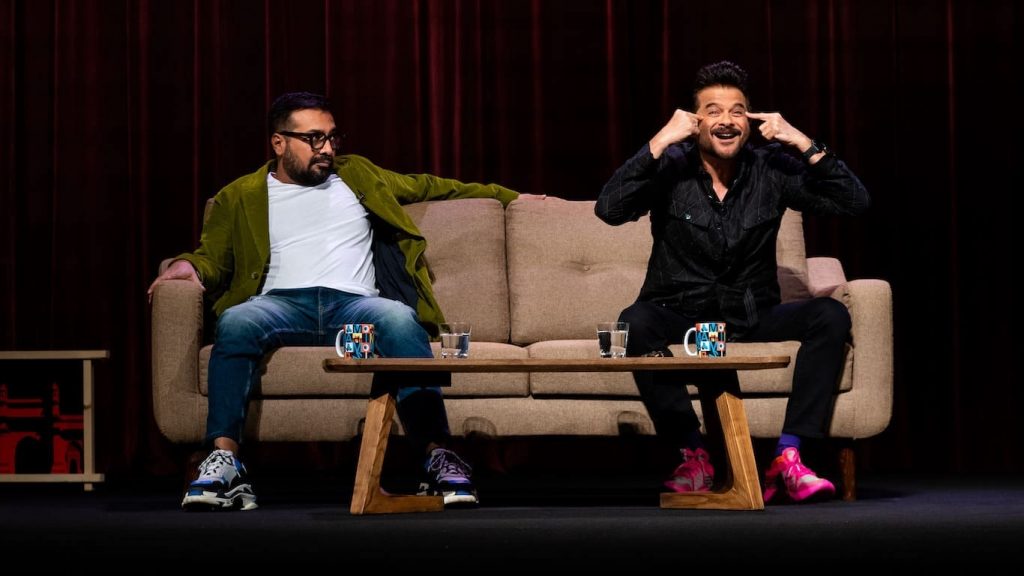 The aforementioned critique is around AK vs AK’s pseudo-success. I can’t call it a failure because it managed to achieve something. That is tension. I can’t call it a success with full confidence because it failed to trick me into an organic feeling, to make me believe that the film is actually about the clash of two men trying to outsmart each other and not about a filmmaker filming another filmmaker filming an actor. I am actually in a pickle with respect to my response to AK vs AK.

Anil Kapoor stuns with his delivery and completely envelopes the stage. Kashyap goes blank in a few sequences and impresses in a few others, but passes because he never carries the burden to perform. The film is not about him. He is not Rupert Pupkin. AK vs AK is a collection of many events strung together into one event spanning a fixed period. Some of those elements are better than the other. Some set pieces are thrilling, some are hilarious, some are plain indulgent while some are intelligently directed.

It is like a high-frequency wave with congested crests and troughs. Regardless, the film manages to structure itself into three acts with a climax that piques your stress and confusion and lets you forget for a while that you have been watching a metafilm. But this is also where it exhausts itself of oxygen and falls flat because the post climactic sequence acts as a summary to a chapter you just read and now you only remember the summary and not the chapter.

This is a shortcoming of memory but the film fails to address the same indue to its indulgence. Or probably due to its compulsion to plow the ground for a potential sequel if Netflix sees it fit. I want to remember AK vs AK (Netflix) as an experiment and not a bait. Now that I have a spoonful of predictable plot information (read noise) forced into my mouth, I will remember AK vs AK as an experiment that forgot its an experiment and became an exercise, a fruitful one in its own right, nevertheless.

PS: The film is a thoroughly entertaining affair for 100 minutes of its 108 minutes. Loaded with film references, witty humor, realistic production and Anil Kapoor’s admirable act, AK vs AK (Netflix) should be watched before any analysis is given importance including mine.

Download the Script of I'm Thinking of Ending Things