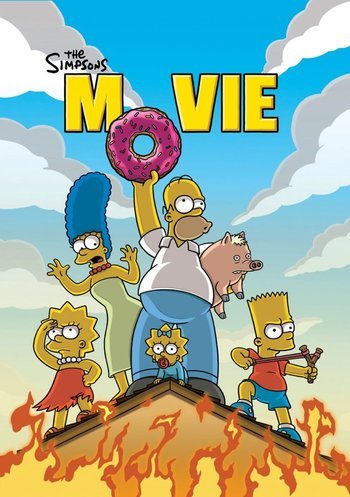 Just about exactly a decade ago, the movie adaptation of what is arguably the biggest cartoon in all of civilisation was released, and to quite a lot of anticipation. It was a long time waiting, a little too long as the movie was released long past the show’s golden era (that lasted roughly up to season eight) and long past when the show was such an embedded aspect of Western culture that made it a key icon of the ‘90s (but not any other decade). Released in between the show’s eighteenth and nineteenth season, the movie was at least a step up in terms of humour and story-telling for these seasons, but The Simpsons Movie is still going to remain only a fairly amusing little moment in this massive show’s history.

So, what to do for a movie adaptation of such an important cartoon? The movie spends a brief amount of time with not just the Simpson family, but some of the many classic characters of the show in the hometown of Springfield until a natural catastrophe causes this town to be enclosed in a large dome, which no-one is able to escape from except the Simpsons family, who find a way to get out and exile themselves to Alaska to start a new life.

Sounds quite movie-like, which works for the movie’s benefit and disadvantage: although it’s quite the adventurous tale for this family who have been on so many adventures, it also favours the appearance of the Simpsons themselves and sidelines a lot of the equally memorable characters like Moe, Chief Wiggum, Apu, Mr Burns, Mr Smithers, Milhouse, Nelson, and Principal Skinner to what seems like brief cameo appearances, with only friendly neighbour Ned Flanders having much of an effect on the story. It’s also jarring that so many other lesser-known characters, like Moleman and Martin Prince, are shoehorned into the story and gags that don’t really feel consistent with their character.

The Simpsons Movie is certainly leagues behind when compared to the golden era, but how many comedy movies or TV shows can reach the heights seasons 2-8 offered? In its own right, this movie is still trying very hard to be consistently and variously funny, and it succeeds, perhaps a little too much. It does seem that with every good joke in this movie, there’s another one in the same set-up that almost diminishes the good one. Watching this movie again, I felt this welcomingly short 83 minute movie could’ve been edited down even further by cutting some of the jokes to make the humour snappier and feel less like the writers getting carried away.

Watching this movie again a decade on, I see that it hasn’t aged too well and gets worse and less funny with each viewing. When it first came out, it was a big deal. I saw it on opening night with some friends and the cinema was so crowded, there weren’t even enough seats for us all to sit together. Seeing it for the first time was an exciting experience and I was pretty forgiving of its flaws. I ranked it as one of the funniest movies I’d ever seen, though mostly for the amount of jokes rather than how hard they made me laugh.

At the time, The Simpsons Movie became the third highest grossing film in my home country of Australia. There was a lot of joyful anticipation leading up to its release, which included 7-Elevens across America being cosmetically changed to Kwik-E-Marts, and the 16 Springfields across the country were put into a competition to see which one would premiere the film (Springfield, Vermont won). I’ve even kept a neat little ‘Springfield Shopper’ mini-newspaper I got from a real newspaper, something I’ll treasure as an artefact of what is a reasonably disappointing movie adaptation of one of my favourite and most watched TV shows of my life. 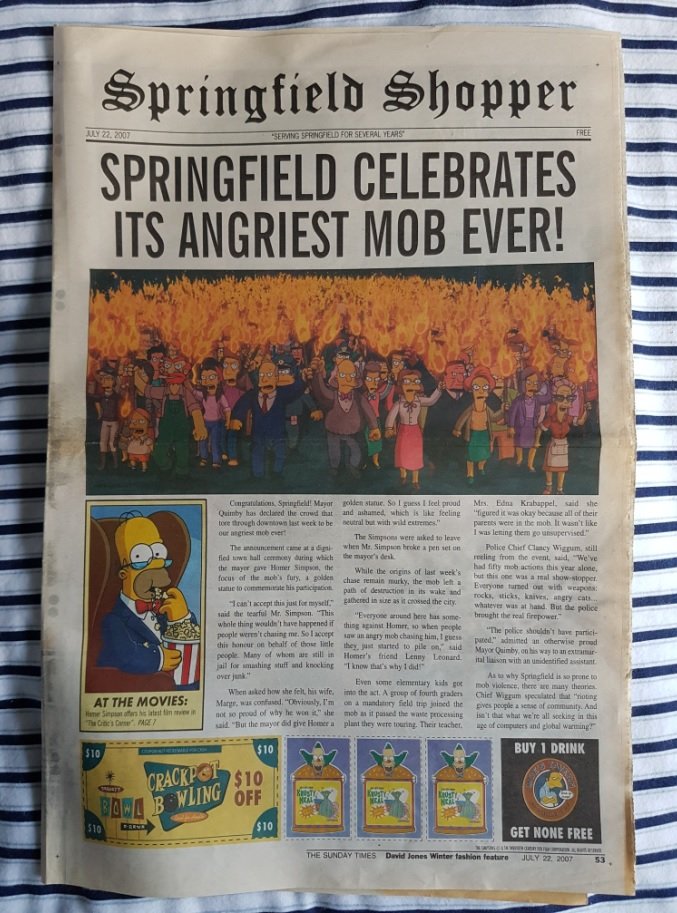 It seems likely I’ll watch The Simpsons Movie again someday, maybe another decade from now, but it is only a curious afterbirth to what is truly a golden era of this show in its incredible course throughout the ‘90s. Rumours of a Simpsons movie began as far back as when the show become a pop icon, which dates back to 1991, and it even referred to movie adaptations in the season four episode ‘The Itchy and Scratchy Movie’, which was certainly cleverer and funnier than the movie we ended up with. The creators toyed with the idea of making a movie involving Bart going to a camp of his favourite TV clown, Krusty, only to find Krusty doesn’t show up like promised, which sends all the kids in the camp to overthrow it – this definitely doesn’t sound like it has the scope of a movie, as we can see when this movie idea got turned into one of many classic episodes in season four, it hardly features the rest of the family.

This movie ended up being closer to Beavis and Butt-head: Do America than South Park: Bigger, Longer, and Uncut, though is still inferior to these other two cartoon adaptations that were made in their own shows’ primes. The South Park movie in particular has aged well as it works not only as a movie adaptation (putting characters in all sorts of new and exciting predicaments), but as a movie in its own right commenting on censorship in cinema and its cultural impact. The Simpsons Movie doesn’t have much to offer other than being a Simpsons movie, and it just doesn’t stand on its own two feet.

Allow me to cap off this negativity and scrutiny over this defining (and perhaps unsurprisingly slightly disappointing) moment in pop culture to say that The Simpsons Movie offers up such a barrage of jokes and gags (with a fair amount that land) that most comedy films would be hard-pressed to elicit as many laughs from me as this movie still does. It’s far more cartoonish and visually amusing than the show’s golden era, though this sometimes works well, especially with one of the movie’s best moments when Bart skateboards to Krusty Burger naked which builds up to a hilarious pay-off. A little too late for what could’ve been as memorable as a Simpsons movie could be, but still just early enough to fill it with more than a handful of great jokes with the family (and barrage of secondary characters) when they were still recognisably funny and endearing. But I could do without a sequel. 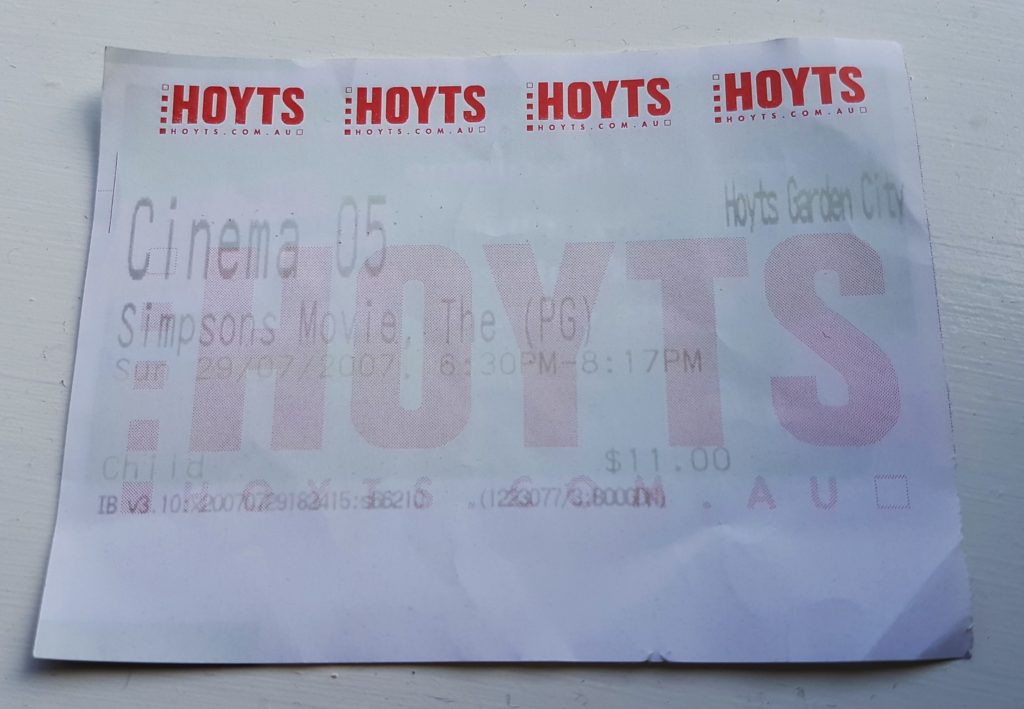 Watch The Trailer Of Suburbicon : The Coen Brothers Are Back With A Bang.