Willow (Season 1), Episodes 1 & 2:  George Lucas created the 1988 film, “Willow,” which was one of the many products born out of the 80s fantasy boom. But unlike a lot of other films of the time, the beauty of the world that Ron Howard had brought to the screen was that it retained its warm pace and atmosphere through two hours of the movie’s runtime. Don’t get me wrong, and I’m not saying that the movie did not have any stakes, just that it never took itself too seriously while also simultaneously pitting its many characters against life-or-death scenarios. Now, when Disney+ announced a “Willow” series in development after the company’s acquisition with Lucasfilm, fans immediately knew that it was an attempt to tap deep into the nostalgia of the original film. At the same time, there was also a growing excitement over the past few months as the mythical world showed plenty of potentials for interesting things to explore.

Now for older viewers, it might be difficult to connect to a story that is so clearly designed to cater to the next generation (the major character doesn’t even show up till the end of episode one), but the first episode begins with a short introduction from the movie. This opening scene of the episode titled ‘The Gales’ directly cuts from footage of baby Elora Danan with her bright red hair to the scene of two young women—one of them redheaded—fighting each other around a cliff. Neither of them turns out to be Elora, though. We introduce Kit Tanthalos (Ruby Cruz) and Jade Claymore (Erin Kellyman). The kit is, of course, a ‘not like other girls’ princess who likes fighting and riding, whereas she hates dressing up. 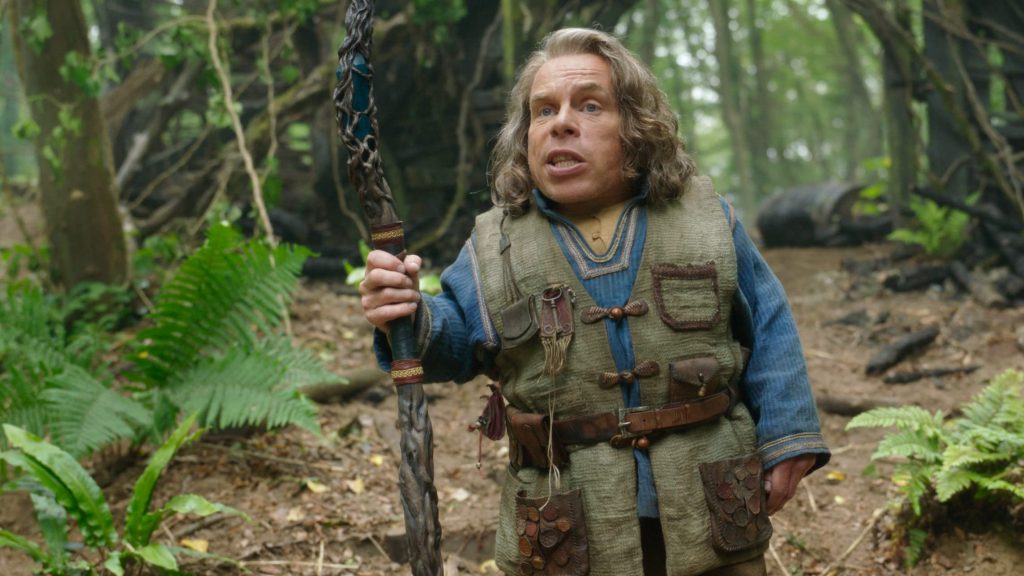 What Happened Between The Intermediate Period Since The Film? Where Is Willow?

As we soon learn, in the intermediate period between the events of the film and the show, Sorsha and Madmartigan (Val Kilmer) got married, became the rulers of Tir Asleen, and had twins: Kit And Airk. However, at some point after that, Mads left on a mysterious quest and never returned, leaving Queen Sorsha to rule and raise the kids on her own without any explanation. Meanwhile, Elora grew up around the place, believing herself to be a maid in Tir Asleen, under the eyes of Sorsha. One time, Willow visited Tir Asleen wanting to train Elora in magic, warning Sorsha that if the young girl didn’t receive the right training, the incredible powers within her would soon disappear. However, Sorsha didn’t want to put the girl in danger, and she reminded Willow, albeit gently, how he wasn’t powerful enough to train a young girl. Ultimately, the two old friends parted ways and never saw each other again.

On the other hand, now that Kit is all grown, her mother plans on marrying her off to the prince of Galladorn (Tony Revolori), as she declares over a feast in an attempt to unite their old kingdoms. She believes their combined strength would prove useful against the forces of darkness. Kit, however, hates the idea and expresses her feelings to her mother while complaining about it to her brother and girlfriend.

Kit’s twin brother Airk (Dempsey Bryk) (named for Madmartigan’s old friend who died heroically in the 1988 film), is meanwhile busy wooing a kitchen maid he calls ‘Dove’ (Ellie Bamber). He grew up under his father’s shadow as the only male heir. Thus, everyone expects him to be a brave and skilled fighter but also expects him to bail when things get difficult, just like his dad. But is that the truth? When Kit calls him out on this, he reassures her he isn’t going anywhere anytime soon. Kit is, thus, forced to be more responsible, thereby burdening her with everything that the kingdom and the realm require and robbing her of the opportunity of living a normal life. This is why she decides to ditch the wedding, kiss Jade goodbye, and make a run for it. However, that plan is ruined when the show gives us its first action set piece, where Airk gets promptly kidnapped by a bunch of terrifying creatures called the Gales as they descend upon Tir Asleen and infect Ballantine. What was their purpose?

The following day, everyone plans on traveling west, going beyond the Barrier in order to rescue Airk. But before that, in the episode’s closing few minutes, they are tasked with meeting Willow (Warwick Davis) so that he can join the gang, helping everyone chart a map to the lost prince’s location. As we had learned, Willow had years ago countered the idea of teaching her anything by stating that Bavmorda’s spirit lives in Airk, Kit, and Sorsha, and hence, her return is sort of inevitable. We can assume that the best guess is that the Gales’ plan is to extract Airk’s blood and use it for some kind of magical ritual to bring Bavmorda back again. During the rescue party’s journey to the Barrier, they all find out that Dove has been tailing them all this time because she’s in love with Airk and wants to do her bit to save him.

Despite all the existential bickering, Dove asks the important question: What is the Barrier? As Jade explains, we learn it’s a magical force field forged by Raziel and Cherlindrea together to protect the realm. So when Jade’s family approached the ‘Mother’s Gate’ (the entry point of the realm), her parents were killed, and she was the only one who made it through. Boorman and Kase refute the claim that the Barrier is supposed to protect the realm or anything like that. As per Kase, it’s for Elora’s protection only and to keep away the forces that are after her. Meanwhile, Willow trails off when he sees Dove, then soon grabs her arm and chants an incantation, revealing a birthmark: she is Elora Danan.

The show’s second episode gives us major “Return of the Jedi” vibes. The episode “The High Aldwin” begins in the past, as a Younger Willow visits his old friend Queen Sorsha. Willow tells Sorsha about his dream and tells her it is time to train her in magic. The Queen disagrees and tells Willow that she sent Madmartigan to find an ancient weapon- the Kymerian Cuirass. Coming back on our journey, Dove struggles with the news that she is Elora when Willow ushers the group underground, where the rest of the Nelwyns now live. Willow re-introduces Elora to Mims (Annabelle Davis), his daughter, as we get a flashback later of Willow reminiscing about his past life. Willow announces the return of Elroa Danan, thus announcing her training, much to Elora’s own surprise. In a gorge in a faraway forest, The Lich (Vitas Le Bas), we see the reveal of Elora just as the Queen is informed of Elora’s leaving the Castle.

At the Nelwin, the people celebrate the return of Elora. Elora and Kit are eager to leave, but Willow insists Elora stay. Willow tends to his plants when Mims comes in; slowly, Mims explains why Elora must leave, and he must go with her. Mims, by saying so, brings out Willow’s old wand we last saw in the film, for him to give to Elora when she is ready. Kit and Jade insist on leaving when Willow informs them Elora is missing. Reluctantly, Kit and the others search for Elora. Elora sits along a riverside where Willow finds her. She confirms her fear and, thus, begs Willow to help them find Arik. Meanwhile, Sorsha keeps Elora’s identity a secret, but unfortunately, the Crone has already made her move. Given that Lich (the magical creature we saw in episode one) has stabbed Ballantine, he’s controlled and sent to track down Elora. The group sets off to continue their journey, but we see Commander Ballentine far behind them. He starts becoming more relentless in his search for Elora, and in keeping up with that, he turns on the rest of his group and attacks them.

How Does Kit React To The Changes Around Her?

Even during their journey, we see how Kit is not happy and isn’t in the mood to open her mind and learn more about the people and culture around her, arrogantly claiming that she doesn’t care about this and only cares about Airk. She wants this expedition to be moved up, while Willow intends to try and train Elora. Given she’s the ‘chosen one,’ the Nelwyns want her to do the ‘Finger Test.’ When Elora fails, we cut to Kit, who laughs at it.

Anyway, we then return to the gang to hear Boorman claim that Madmartigan apparently found the Cuirass and is, therefore, sitting along with it somewhere out there. Elora begins her magic lessons, and they gradually start going well as they always do. But Willow soldiers on around by trying to make her grow a bush out of eckleberry seeds, but even that seems to go horribly. While Elora practices her spells, a remorseful Willow admits to Silas that he shouldn’t have parted ways with Sorsha just because she forbade him from teaching a young Elora so many years ago.

Does Elora Danan Learn Her Spell? How Is She Abducted?

Ballantine and his platoon then arrive at Nelwyn first, but Mins tries her best not to give away the fellowship’s whereabouts. But since the platoon’s instincts are still functional, the army finds out the general direction in which Elora and the rest have headed. Willow and Elora, in the meantime, have a big argument about her inability to perfect a simple spell that can make a plant grow till she eventually disappears back into the forest, just like she did earlier in the episode.

Jade and Kit have an argument about leaving the pack and going on their own over the Shattering Seas and into immemorial City to rescue Airk as planned. However, Boorman’s arrival prompts Graydon to look for Elora. He does give Elora a small pep talk but leaves her alone, unaware of how he would make her vulnerable to an attack by Ballantine. The latter then kidnaps her, but the episode ends on a hopeful cliffhanger. Right after he takes her off, we cut to the ground she was sleeping around and realize that she indeed mastered the ability to grow a plant with her magic. But will that be enough to beat a juiced-up Ballantine and his infected army of soldiers? Well, we have to wait until episode 3 which arrives on December 7th.

Related: House Of The Dragon (Season 1), Episode 10 (Finale): Review, Recap And Ending, Explained – Which Dragon Can Match Vhagar? What To Expect In Season 2?