Home»Reviews»Films This Week»Spencer (2021) Review: An Admirable Film That Evades All Tired Biopic Tropes
Films This Week/Reviews

Spencer (2021) Review: Given Princess Diana’s stature in the public consciousness, especially since her tragic death in 1997, it is easy to see how a film depicting her life could descend into an exercise in hero worship. Check the critically savaged Diana (2013) directed by Oliver Hirschbiegel with Naomi Watts in the title role. That film focused on the final two years of Diana’s life and was heavily criticized for being grossly maudlin. Spencer, Diana’s maiden name, focuses on an even more condensed period of time, three days over the Christmas period 1991. It takes a bit of knowledge of monarchical history to appreciate what a tumultuous time this was. Screenwriter Steven Knight doesn’t want to hold anyone’s hand. Either that or he is banking on the fact that his audience has seen the latest season of The Crown (2016-).

Spencer (2021) is an admirable film in that it shirks all tired biopic tropes. Larrain and Knight realize the utmost importance in fully realized characterization rather than leaving Diana’s legacy in popular culture to do the work for them. We are introduced to Diana, played here by a truly amazing Kristen Stewart, driving her open-topped Porsche through the English countryside. She is lost, in more ways than one. Late for the monarchies’ meticulously planned Christmas festivities, she stops into a roadside greasy spoon to ask for directions- she is the People’s Princess after all.

Diana is portrayed here as a figure on the cusp of rebellion, but one- having lived her entire life surrounded by nobility- who is not exactly sure what rebellion looks like. She arrived slightly late for a traditional Christmas photograph, wears the wrong dress for Christmas Day mass, and gets up in the middle of the night to gorge on chicken legs and cake. These misdemeanors echo loudly in the house of Windsor. Diana is not toeing the line, she is not keeping up appearances. 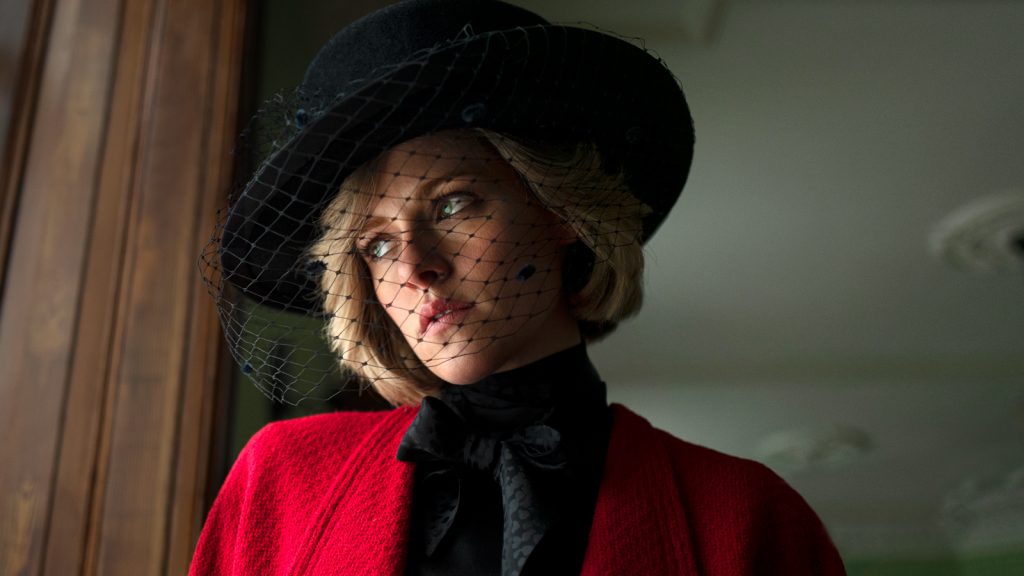 Larrain and Knight make a point out of the fact that nothing is sacred within the walls of Sandringham House. There is a sign in the kitchen that reads ‘Keep Noise to a Minimum: They Can Hear You’. This sign is a warning to the kitchen workers not to disturb their royal masters, they are on high alert to their extravagant expectations. However, it also hints at something more sinister. Privacy is a fallacy. In one of the few hearts to hearts Diana has with the estate’s head chef Darren (Sean Harris) he pleads for her not to reveal too much to him, even though he clearly cares for Diana, his pragmatism supersedes his emotions, he and Diana cannot have a meaningful, personal relationship.

Larrain and Knight’s mastery is in churning dramatic effectiveness out of Diana’s relatively first-world problems. A point is made out of The Firm’s bizarre tradition of weighing each guest, before and after they arrive, ‘a bit of fun’ Major Gregory (Timothy Spall) labels it, measuring how good a time each individual has had. This has added implications for Diana, given her struggles with bulimia. These little routines elucidate that despite her decadent surroundings, Diana is in her own personal prison; her garments, chosen for her in advance, are labeled P.O.W. The film strongly links her to a previous tragic monarch Anne Boleyn, who was infamously beheaded by her husband King Henry VIII after being falsely accused of adultery, and is another woman whose death elevated her importance to society.

Legacy is an important motif in this film. This is one of the many reasons why Spencer is a companion piece for Larrain’s previous film Jackie (2016), about the days following the assassination of John F. Kennedy, seen from the perspective of his wife Jackie Kennedy Onassis. Towards the end of the film Jackie, played by Natalie Portman, tells a Life magazine interviewer, ‘Don’t let it be forgot, that for one brief, shining moment there was a Camelot’. Here, Jackie is trying to solidify her husband’s legacy in the American public’s consciousness by correlating the Kennedys with a mythical society in perfect harmony, ‘ordinary men, fighting together for a better world’ adding ‘there’ll be other great presidents… but there’ll never be another Camelot.’

Similarly in Spencer, musing on the tradition of eventually paring down past monarchs to one word, for example, William the Conqueror, Diana asks a confidante Maggie (Sally Hawkins) what her one word will be. Tellingly this question remains unanswered. Instead, we get a sequence of Diana and Maggie frolicking free along the Norfolk coastline near Sandringham estate. History has dictated Diana’s tragic legacy, however, there is something triumphant about this film’s ending. In this pinpoint in time, she is a woman who escaped, and the possibilities, however brief, are endless.

This review was first published on TPCFilms.com