The hype, earth-shattering box office records and most of my cinephile friends going gaga over it, made me really curious to watch the sumptuous and epic saga Baahubali. S. S. Rajamouli who ascended to fame with his two epic fantasy films; Magadheera and Eega, is back with another fantasy film Baahubali: The Beginning. It is definitely an ambitious work of cinema [written by Vijayendra Prasad, who also wrote Bajrangi Bhaijaan] that deals with an age-long rivalry between cousins of the royal family of Mahishmati and the related politics which spanned over generations.

The principal character, Baahubali, is raised by the residents of a certain village as Shivudu after they find him floating in the river, at the foot of a gigantic and visually spellbinding waterfall that can put even Niagara Falls to shame. The first half of the film is invested in showing the prowess of demi-God Baahubali who seems to believe that there exists nothing like impossible. Be it deracinating Shiva lingam and carrying it under the waterfall followed by breaking into a dance, or falling many a time while mounting the waterfall and still be alive without a scratch, or gliding through the forest like Mowgli while saving his arse or gently providing Tammana’s character Avanthika a makeover that eventually makes her fall for his innocent charm. He can do anything.

Soon he learns about his true identity and estranged blood mother after his arrival in the kingdom of Mahishmati and tries to rescue his mother from the ruler-cum-cousin, the savvy Palvaalthevan (Rana Daggubati) reigning over the kingdom of Mahishmati. Funny thing is that his captured mother (Anushka Shetty), who herself looks in her 30’s having perfectly chiselled nails, waits for 25 years for his rumoured dead son (Baahubali) to free her. It shouldn’t be too hard to guess what happens next. 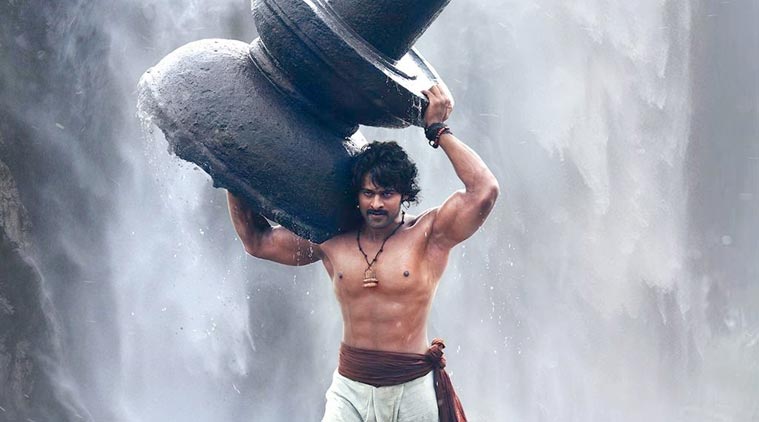 The kingdom of Mahishmati does look spectacularly amazeballs & the perfectly built huge sets do make an impression. The chase scene on snow-covered mountains is breathtaking and the almost 30-minute long war scene was choreographed magnificently which does provide an edge of the seat thrill. It’s evident that Baahubali: The Beginning has already set a benchmark for jaw-dropping visuals and stunning graphics in Indian cinema. But while the makers of Baahubali were busy in paying close heed to modern technicalities for its superior quality of VFX, they seem to have ignored the technicality in its writing and completely ignored the human drama necessary to root for the characters in the film.

It’s understandable that such a big-budget film needs to have commercial elements for mass appealing, but it should be done smartly so it doesn’t hamper the flow of the film. That requires smart writing. The writing could never scale to good heights to drive such a multi-character ambitious film, the screenplay goes for the toss at many places. Initially, I really liked the character of Tamanna as the strong, bold, independent and rebellious warrior until she is objectified and her character falls in love within no time and starts singing and dancing. The story is weak, the narration is tattered and the performances below par except for Ramya Krishnan. I was so exhausted by the end that even the epic war scene couldn’t hold much of my interest. Hate to say this but this film didn’t work for me, I was embarrassed at many places and cheesed off.

Baahubali: The Beginning is available on Hotstar