Home»Explainers»Chup: Revenge of the Artist (2022) – Themes And Ending, Explained
Explainers

In the past few years, critics have rapidly devalued as merely being ‘tastemakers,’ eventually turning the audience to form echo chambers. Increasingly, this growing trend has seemed to put even more pressure on film critics to cater to those specific echo chambers. “Chup Revenge Of The Artist,” R Balki’s new film, makes a case that this devaluation has been going on for decades. Using Guru Dutt’s last film to frame its plot around, the movie cleverly presents a layered story of a psychopathic killer. Here’s a deeper look at the film’s plot, its deeper themes, and the ending. Spoilers follow.

Also, Read – Chup: Revenge Of The Artist (2022) Review ― A Unique & Absorbing Thriller Which Is Also A Love Letter To The Unheard Voices Of Cinema

Chup: Revenge of the Artist – PLOT

The movie opens almost with a similar eeriness the way “The Batman” cut to its first scene earlier this year, with the looming shadows seeping off through each frame. We see the first dead body – a middle-aged obese journalist seated on his toilet, deep scars scored around his torso. It’s here where we’re introduced to crime branch chief Arvind Mathur (Sunny Deol), who describes and later comes to the conclusion of how the triangle carved into the dead man’s forehead is, in fact, an uncompleted star and that the killer seems to be ‘rating’ his victims. 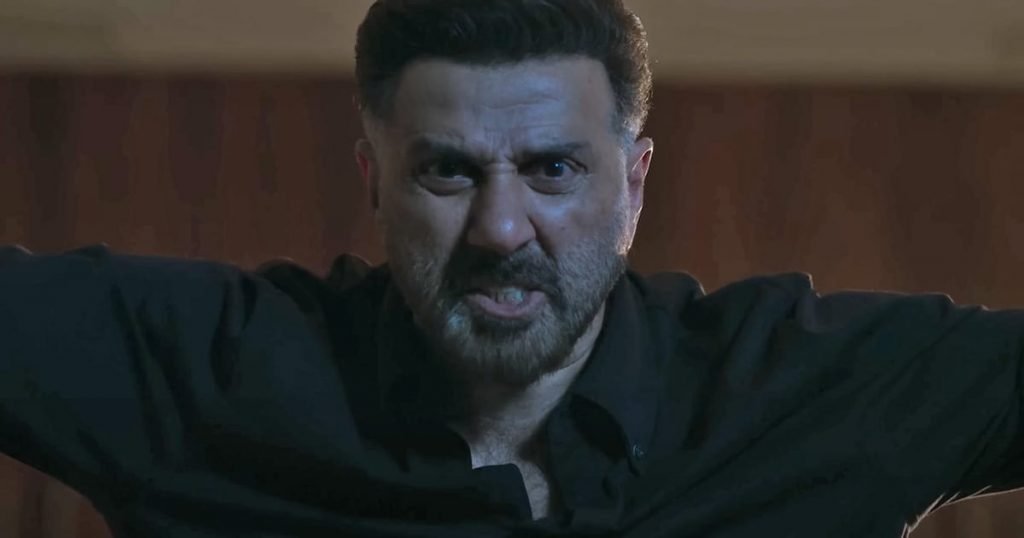 THE MEETING OF TWO WORLDS

Meanwhile, we are introduced to a florist named Danny (Dulquer Salmaan), who bumps into Nila (Schreyer Dhanwanthary) one day as the latter visits his shop. A news media entertainment reporter who works for the Mumbai Post, Nila is a film fanatic who likes to live around earshot of the musical numbers distilling from the local studio next door. The two are immediately drawn to each other as the movie starts paralleling these two storylines until they coalesce into a fast-paced second half. These little touches make the world-building in “Chup” feels lived in, helping us embrace its absurd aspects by turning the rules of plausibility upside down.

THE SERIAL KILLER ASPECT in Chup: Revenge of the Artist: EXPLAINED

After the first murder, the Mumbai Police, led by Inspector Mathur, finds brutally murdered bodies in different places of the city – the second one across two different railway tracks, and the third one being pitched to a cricket ground with the body organs found elsewhere. The team hunts down in search of the killer, looking for the perpetrator who seems to have a specific purpose.

Soon, after putting the pieces together after discovering the second murder at the cricket stadium, Mathur is able to connect the dots. The killer is specifically killing certain film critics, exactly in line with the kinds of witty one-liners and ‘masala’ reviews they had written. Even after already letting us know who the killer is by setting up the character of Danny and his multiple personalities, the movie keeps the momentum building because of the back-and-forth between the two storylines. It is Nila’s dynamic with Danny that forms the ticking time-bomb of the film; eventually, even we know she would find out about Danny’s true persona, thus, leading the two plots to combust into some tragedy.

As we soon find out through Mathur’s character, Danny is a “critic of the critics,” eviscerating movie reviewers in the same manner they often rip apart films. The choice of rooting these characters in Mumbai makes more sense, given the close association the city has shared since pre-independence with the film industry. To make the violence more brutal – and to make the pattern more visually striking – the killer also leaves deeply carved inverted stars on the forehead of his victims. The movie throws us off-guard more than often during its opening first act, through the off-kilter bursts of Danny breaking into talking his own thoughts out loud. More than once, we see Nila do the same.

The cinematography here by Vishal Sinha goes to elucidate how “Chup” is a film clearly in love with the movies. The immaculately textured depiction of Bandra with echoes of old-school romance and recurring motifs to Dutt’s timeless films add a sheathing layer of poignancy that reaches its peak in the film’s last act. A sense of old-school grittiness and reverence percolates through the modern-day vistas and city corners. The limited and corrected use of background music also seems to work well, and it’s all the more surprising seeing Sunny Deol star in a role he otherwise used to play so differently.

There are multiple metaphors and quirky nods that the film doesn’t really deliver upon, but some work magnificently. For instance, notice how at one point, Danny surprises Nila by gifting her flowers adeptly placed inside a case replaced by the film reel. These few understated moments work because of how we are first lured into the conversations of the two characters, where Nila discusses with Danny her love for cinema and how it fills up her life with colors and joy.

In the film’s extremely fast-paced second half, Mathur brings in a trained and reputed psychologist to the team. Played by Pooja Bhatt, the psychologist then makes some solid (although stereotypical) counterpoints to the killer’s hatred towards this select bunch of critics and what may be the reason. By speaking of how the serial killer might be doing this for a larger, more idealistic outcome, she declares that most serial killers are male. After promptly having discovered a pattern, the hunt is finally on.

By believing how they need to think like a psychopath while dealing with one, Mathur decides to hire a paid critic to trash a new release called “Ding Dong.” The plan to get the ‘critics ka critic’ then starts intertwining the two worlds, as Nila ends up being the preferred choice for writing this fake review. Having watched the new release himself, Danny finds out how it’s published under the name of his love interest. He sits on the floor of his flower shops as the other more menacing side of his kicks in, asking him how justice must be served. While Nila is seeking protection under Mathur, Danny visits her with the inspector still in the house. After manipulating Mathur and Nila (as well as the audience) into how he might be there for a good purpose, he later throws Nila’s body off of the window, onto the other side of the wall. After escaping through the house, we find out that it’s, in fact, Mehboob’s studio where Danny carries fainted Nila. Through a heated confrontation that naturally follows, Nila tries to make sense of the situation while asking Danny to reconsider his plan. It’s here where all the little clues sprinkled in the movie come in, as it’s revealed how Danny himself made a film named “Chup” – an autobiography of his own tragedic life. Critics, as we learn, ten years ago had trashed his film unethically- turning his life’s agony into a witty jargon of their own. He also believes film criticism is significant, but cinema is ultimately an artist’s medium. Nila makes him realize how there’s at least someone who gets positively affected by a film, as, above all, it’s an artist’s medium to pour out emotions into. We see a glimpse of introspection in Danny’s eyes.

Inspector Mathur realizes how Danny might actually be the killer by taking notice of his bicycle and the off-kilter way in which the man moved his hand over Nila’s forehead, roughly lining up his fingers in the pattern of a star. He eventually reaches the studio just in time and ends up saving Nila from Danny right before the latter crushes the newly made critic’s head into several pieces in keeping up with the writing style.

The team, then having (re)discovered the reel footage of “Chup,” screens the film onto a projector. It’s here where “Chup: Revenge of the Artist” throws in all its melodramatic ques that work magnificently. The poignancy that had been built up through echoes from within Danny’s persona is now get visually depicted in his 10-year-old biography’s old-school, grainy vintage visuals. The team is brought to tears, concluding how it would make sense for a man to go down this path after being treated so unethically by people who claim to love the art dearly. The movie shows us, Danny, in a prison cell, as he discovers how a film critic has just died due to COVID-19. With the walls of the prison closing upon him, we see the crushing of an artist once again after learning how society treated him unjustly. The film’s last shot boastfully re-creates the crucifixion-like imagery from Guru Dutt’s “Pyaasa” (the famous iconic shot where Vijay enters the auditorium).

Most of the themes the movie seems to be centering itself around work – by weaving in Guru Dutt’s influence – isn’t merely to shamelessly masquerade the film’s overall screenplay and execution. This is because the emotional beats in “Chup” work extraordinarily well. Guru Dutt is ultimately a prop – a (convenient) plot device painted onto a larger canvas incorporated with the ethics and norms of the visual art form. There’s a finely staged scene where we quite literally get a visual portrayal of the brawl breaking between film critics and producers that so often seems to be the case. There’s a point where a character says, “it’s not about the film anymore,” almost as if the makers themselves were echoing the current state of the art from an industry dominated by showbiz gossip and controversies.

A scene that features Amitabh Bachchan, almost playing off a parallel version of the character he played in “Jhund,” almost breaks the fourth wall by educating us that critics are crucial for the growth of this critical art form and that a ‘hit film’ doesn’t necessarily have to be a ‘good film.’ There’s a Freudian touch as well. The director, who has also worked on the screenplay, seems to be making a statement about the impact of movie criticism on a creator’s mental state. “Chup” swings at a lot of essential and timely issues, but at the heart of it, it’s about how critiquing or even describing a film daily goes beyond reducing the creator’s work into flashy and clickbaity witty punch-lines that increasingly dominate our social media trends.

CHUP: REVENGE OF THE ARTIST – PITFALLS AND FLAWS Explained

So many off-kilter dialogues feel tweaked unnecessarily; the movie’s obsession with wordplay and the ‘masala’ script itself at times contradicts the broader theme it so religiously seems to adhere with. The script’s obsession with churning quotable dialogue seems more desperate than some critics’ desire to feature their lines behind BluRays.

Good films always find their audience sooner or later, but do bad movies deserve to die unsung? Who decides what movie is bad or good? Do critics have to ‘trash’ onto a film, or can they just respectfully bring out points on why the film did not work for them? “Chup’ tries shoving too much into its average run-time of 2 hours and 15 minutes. The second half moves at a breakneck pace, disallowing you the room to breathe and process its statement. But as a consequence, the movie doesn’t fully embrace its lofty comparisons and quixotic themes. At least it’s miles better than a slap-stick rip-off of some foreign language film.

A Jazzman’s Blues (2022): Review & Ending, Explained - Will Jonathan Learn The True Identity Of His Father?