Daddy Longlegs Review: I have always had this hunch how Safdie brothers seem like the descendants of John Cassavetes. Just like John’s films, their every venture feels like a wrestle between characters to connect with one another – a constant longing for love, like how Cassavetes would have put it. Their films showcase characters in their most vulnerable, most embarrassing moments.  However, that is just what we see on the surface.  These moments are never shallow for the characters to make a fool of themselves. There is much more to find underneath.

The late Independent film-maverick wasn’t as active in his twenties or thirties – except getting ‘Shadows’ made – a highly energetic, improvisational debut. We have seen parts of his selves being transferred in the characters mostly in his later films. Otherwise, there could have been a clear comparison between him and Safdies. Still, what Cassavetes pioneered in the seventies has paved the way to the likes of young independent filmmakers to create something that they believe in – beyond the studio pressures. Thus, the directing-duo winning an award given after him somehow feels a little more justified.

The reason for showering high praise over both is my admiration towards their respective works. Safdie brothers, who are largely known for their recent films like Uncut Gems or Good Time, showed the same exuberance since their journey began. Daddy Longlegs is no exception, which is their collaborative feature film debut. It is not as anxiety-driven as their later works, where we hardly get a moment to breathe during the proceeding. However, that does not take away the naturalism they bring through their highly idiosyncratic characters. Thus, this semi-autographical film, which is based on their actual father, becomes their most personal and the warmest attempt of filmmaking – within the style that they are known for. 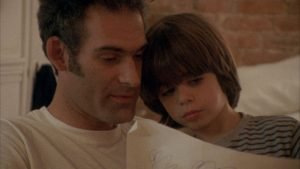 Daddy Longlegs revolves around the life around a middle-aged white, Jewish character – someone who is struggling to make the ends meet in his day-to-day life. After getting divorced and losing the custody of the children to his wife, he is left without any family. Yet, there is one exception promised in the clause – according to which the kids get to stay with him for two weeks, or to put it more precisely, he gets to stay with his children. Two weeks in a whole year! If that seems to be particularly cruel on this father-character, his clumsiness and naivety go on to explain why.

He works at a theatre-chain that does not pay exceptionally well. He is financially unstable and cannot afford even the basic necessities that their mother can easily do. Yet, that is not the worst part of his situation. The worst part is his immature or borderline irresponsible behavior that cannot go unnoticed. Even within the two weeks assigned to him, he cannot manage the simplest tasks of parenting. Be it his naïve arguments with their school-teacher, or his forgetfulness and inattentiveness making the kids unnecessarily wait; he can be described as nothing but a disastrous parent or at least an irresponsible one.

But the relationship he has with his kids cannot be put in simple brackets. The more we grow, the more we find our parents to be a mix of several attributes because of which it is impossible to completely dismiss them as ‘horrible’. Safdies may have gone through the same emotional journey. It results in Daddy Longlegs being an incredibly empathetic outlook into the life of this fuck-up of a father and the constant ongoing and off-going love-hate relationship with the kids. With a largely despicable character, there is still a humanist approach– something that has almost become a trademark of their work.