Home»Reviews»Death by Hanging [1968]: A Brilliant, Provocative Work of a Anti-Authoritarian
Reviews

The iconoclastic, inventive and angry film-maker Nagisa Oshima’s dark satire “Death by Hanging” (‘Koshikei’, 1968) opens in an environment, which we could call as ‘clinical reality’. At the opening, a public poll is cited, where 71 percent of the Japanese population supports capital punishment. “But how many of you have seen an execution” asks the director, before taking us into that reality. There’s a calm establishment shot of the execution chamber and gradually in a dispassionate tone, the camera walks through the chamber’s corridors, altars and holding areas as a narrator explains the clinical, impeccably conceived process of hanging. Then, we see the distressing shot of a blindfolded prisoner, known as R (Yu Do-yun) trembling in fear and being forcefully led to the gallows. In the staggering ambiance of clinical reality, the particular shot casts a stone to originate ripples in our heart & mind. But, the next moment we witness a strikingly different shot, where like all the blank witnesses the camera traces the path of noose to the rope in ceiling that’s tautly tied off at another end. The witnesses take their position, the quivering prisoner is positioned, the button to trap door is pressed, and with a clinical precision, down goes the convict to meet his death. Alas, soon after the hanging, Oshima turns the sharp, bleak reality into a dreamlike reality.

Nagisa Oshima is one of Japan’s outlaw masters, who established himself from the early phase of his career as a rebellious, politically committed, anti-establishment film-maker. Oshima’s experimental hunger, heavy dialogues, aesthetic innovation and blistering critique on Japanese society led him to create an acerbic cinematic form. His film forms often deliver a punch to the guts of cinematic illusions. There are deliberate long shots, disorientating fast cuts, unflinching portrayal of carnal desires or sexual obsession, and also withholds an eye for detail to frame the unconventional beauty. Although Oshima gained prominence and reaped controversies through his exploration of individuals’ or society’s sexual unconscious in “In the Realm of Senses” (1976), “Death by Hanging” remains as one of his formally audacious venture. Right from the opening detached voice over, the film is diffused with docu-drama element that often paves way to hysterical black comedy, which is then transcended to postulate heavy philosophical questions about the nature of capital punishment in a prejudiced society.

The hanging, thinks the men inside witnesses box, is a quick simple procedure. Now that the trap door is opened and R is hanged, the medical officer needs to just wait and check the prisoner’s body for confirming the death. That’s when everyone in the chamber gets panicked. R lives. His heart is still beating and pulse shows no signs of weakening. Now, there’s a confusion over the protocol. Some one suggests reviving the prisoner, making him realize what had ensued and then once again repeat the execution. The priest rejects the idea, offering “His soul has left a body” (he calls him non-R). When R gains consciousness, he remembers nothing. He has forgotten his crime – raping and killing two girls—and also his whole identity. One of the administrators says it’s against law to execute a man without a sound mental condition. The stuffy authorities after discussions decide to help R to remember what he’s done. In order to recover R, they decide to re-enact the tragic events by recreating the setting of his impoverished home and also the manner he committed those crimes.

The way director Oshima satirizes the government officials may make viewers to accuse Oshima of treating them as farcical puppets rather than human characters. It is a tone, which may alienate a few, but I feel it’s the best way to observe the cogs of imperialist society, whose so-called ‘good intentions’ are just a hypocritical veil. I think it’s the right way to scrutinize the subjective position of leaders or privileged individuals, ridiculously trying to understand the torment of condemned. So, the quick descent into delirious behavior of authorities seems purposeful. It is also undeniably funny when these authorities frantically hump each other to make R, remember his crimes. The bunch of officials lack real understanding, behind the cause and nature of R’s crime. They make crude guesses about R’s motivation and re-enacts R’s family atmosphere with ridiculous racist stereotypes. The Korean underclass living in Japanese society (known as ‘Zainichi Korean’) is one of the often explored themes in Japanese cinema and here Oshima profoundly explores the social-cultural barriers and the prejudices it leads to. The officials’ theatrical acting in trying to enact the ‘Korean’ nature (of R and his family) conveys the national arrogance, where the marginalized Koreans are relegated to cheap labor and stamped with criminal tag. The hate these people withhold for poor migrants blurs line between the character natures of condemned and of those condemning. The officials identify ‘carnal desires’ as the motivation behind R’s crimes, but in playacting those crimes, we get to see those men’s tendency to showcase their own dark fantasies (“You even smell her breath. Something soft……her breast! A young girl’s soft breast” says the doctor while performing before R). 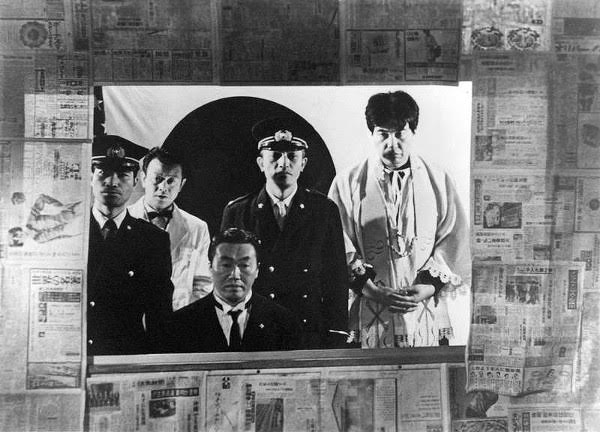 Of course, Oshima’s main focus is on capital punishment. He evokes R’s ethnicity and the authorities’ racism to imply how R’s failure and crimes are the result of condescending treatment of the society. Oshima hints how personal flaws are created by a disproportionate society, wearing the mask of hypocrisy. But, despite the highly specific nature of the Japanese treatment of Koreans, the film gains universality when it tries to somberly self-examine the cause and effect of R’s crimes. In a long, winding sequence towards the end (or third-act), a ghost claiming to be R’s sister visits the execution chamber. The ghost confirms R’s identity and crimes, but is totally against the death penalty. It debates with the officers, regarding their nation’s war atrocities & legal killing of Koreans and also empathizes with the prisoner, making him to deliver the long reflection about the nature of sexual desire, guilt, reality and dream or imagination. “Is it wrong to kill?” asks R, to which the priest replies “Yes! It is wrong to kill”. “Then killing me is wrong, isn’t it?” asks back R. It may not be a nuanced argument, but it questions the margins between the legal killing of state and illegal murderous act of an individual. Who makes the choice of killing the perpetrator? And who should pay the price for that state-sanctioned killing? Should the state show the same kind of remorse R had while committing the vile act?

It’s all quite straightforward questions and Oshima takes a clear stand on his view about capital punishment. By the end, these questions may not change an individual stance over death penalty. But, what “Death by Hanging” really achieves is in making us think about the abstract concepts of justice, nationality and race. “What is a nation? Show me one! I don’t want to be killed by an abstraction” claims R. Nevertheless, Oshima’s rage against the proud proclaims of nationality and racial superiority shouldn’t be mistaken as the justification of R’s crime. What the director wants to observe is the state or establishment’s twisted perception of race and class that leads to create poverty & criminals, and its hypocritical nature to condemn indviduals’ crimes as if it’s an anomaly (which is really the result of state’s dodging of its obligations). In the end, after the successful hanging, the narrator thanks the viewers for participating in it. By thanking us, Oshima is questioning our support for this social hierarchy, riddled with abstract terms and distorted ideas. 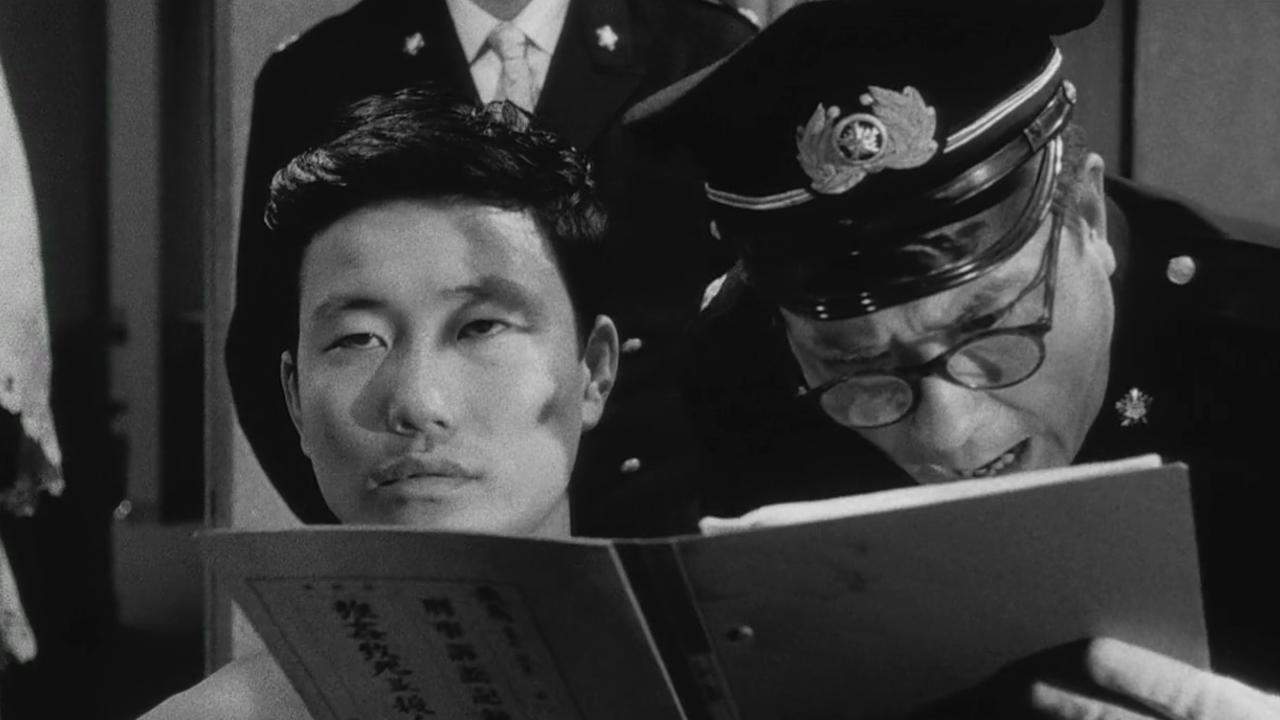 The thematic pursuits and heavy-handed social realist messages might make viewers to consider “Death by Hanging” a film that only relies on dialogue. Yes, there’s a heavy emphasis on dialogue, but Oshima’s film-making style (cinematographer: Yasuhiro Yoshioka) plays a vital role in staging the situation’s intricacies as much as the earnest speeches. The tight compositions of the chamber at times give an uncomfortable feeling – an element that defined Oshima’s visual language. In the re-enactment scenes of R’s family, the frames zeroes-in on R’s in-actions so as to indicate his powerless nature in the hostile socioeconomic structure. The big, blazing image of Japanese flag is a recurrent visual motif. In front of the sun-mark flag of Japan (commonly known as ‘Hinomaru’) the impassive District Attorney sits, gazing at the enacted familial tribulation of R. It indicates how much the establishment and the national identity burdens R’s position. When R opens up his thoughts, the flag drapes his body as if it is trying to bear his inner burdens. Finally, we once again see the white empty space adorned by the flag and poker-faced attorney, symbolizing the obliterative image of those identities. The performances are delivered with astounding spontaneity and zestfulness, especially that of the Education officer character, played by Fumio Watanabe.

“Death by Hanging” (118 minutes) is a hilariously absurd, engaging and sharp critique on socioeconomic & socio-cultural barriers that spawns unrestrained prejudice in the society. By radically disregarding the establishment’s perception of justice, Oshima creates one of timeless works of political cinema.