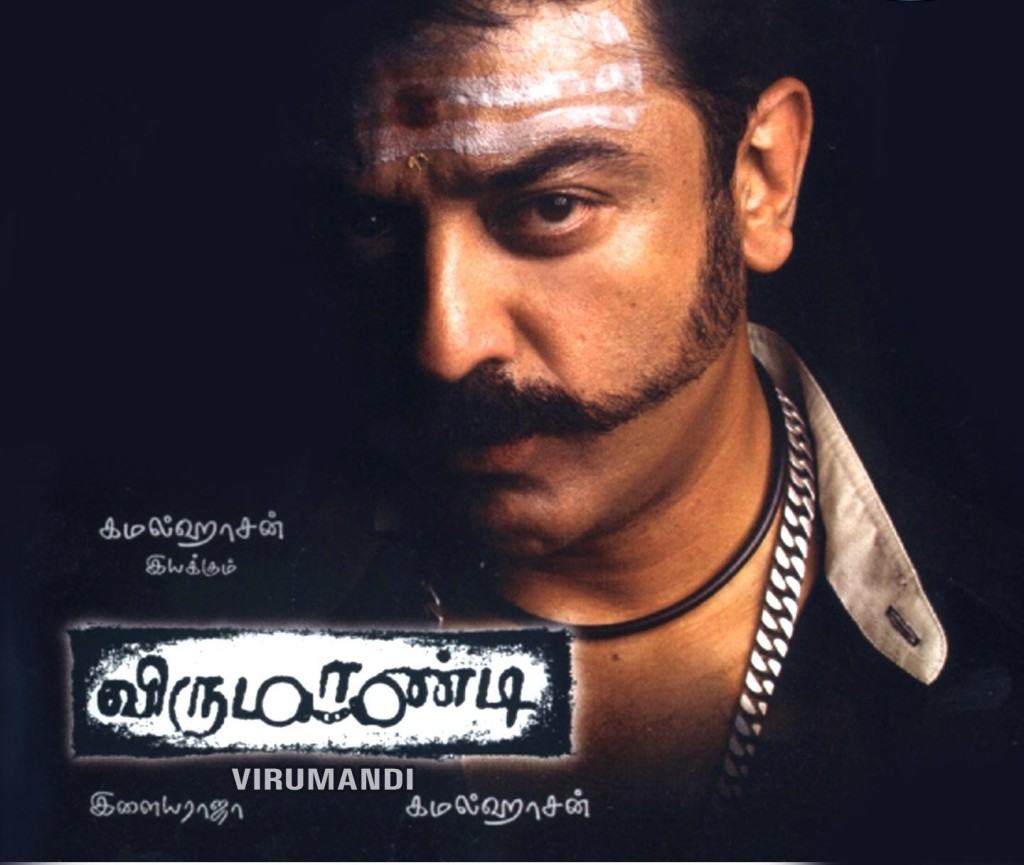 Kamal Haasan is one of the most versatile mainstream actor & filmmaker of Tamil/Indian cinema. Praising his performance or penned dialogues or subtle directorial touches would only be a tedious reiteration. Out of his wide range of cinematic endeavors, his 2004 epic project “Virumaandi” inhabits a noteworthy position. “Virumaandi” is a tale of avarice and caste-induced violence in the rural region of South Tamil Nadu. Its working title “Sandiyar” created quite a ruckus among Dalit political outfits, since it was presumed that the title is a means of glorifying the caste pride of ‘Thevar’ community. The new title didn’t also appease the protestors and there were calls for boycotting the film, back when it was released on January 2004. There are quite a few flaws in “Virumandi”, although it couldn’t be accused of glorifying caste-instigated violence or for diffusing a false sense of pride on a particular community.

The movie opens like a docu-drama, where a documentary filmmaker Angela Kathamuthu (Rohini) interviews different members of the judicial system, who support and question the validity of capital punishment. As Angela walks through the Chennai prison premises, she is beckoned by a death row inmate, who talks on camera about the rotten police officers in the jail. The next day there is quite a disturbance outside the jail premises as people are protesting over the mysterious death of a deathrow inmate. The jailer (Nasser), a genial man who is aware of his inability to abolish the prison corruption, asks Angela to finish the interviews faster as a full-blown riot is just waiting to happen. The sleazy cop Peikaaman (Shanmugarajan) talks about two vicious criminals, who have committed 24 murders in Theni, a district in South Tamil Nadu, as the perfect interview materials. The wardens are warned to not make the two prisoners confront each other since both men are waiting to wreak vengeance.

The narrative unfolds in the non-linear, ‘Rashomon’ style. The first accused Kothaala Thevan (Pasupathy), who serves a life sentence, tells his own version of the bloody events, followed by the recitation of the same events from a different perspective by a reluctant & caustic Virumaandi (Kamal Haasan). Viruman is facing death penalty for the rape and killing of Annalakshmi (Abhirami) – Kothaala Thevan’s niece – along with other vengeful massacres. Both the versions vividly detail the clashes between powerful men – Kothaala and Nallamma Naicker (Napoleon) – of different rural communities. In one version, Virumandi is the instigator of mayhem, while he is merely a pawn, cursed for owning a plot of land with ample water resource, in the other version.

The slender structural similarity in the film’s narrative to the Japanese master’s benchmark cinema was either overly praised or passed off with blistering comments. Director Kamal Haasan merely gives a nod to Kurosawa’s masterful script rather than take a similar approach to explore the meaning of ‘truth’. The script favorably inclined towards the narrative offered by protagonist Virumandi. At the end of second flashback, the filmmaker isn’t trying to say there are two sides to truth. By adding enough poignancy to the primary character, Kamal Haasan clearly demarcates the truth and lie. However, Kamal haven’t used the non-linear narrative as a mere gimmick. He isn’t trying to state that truth could be elusive or multi-faceted; he just tries to depict how law enforcement itself muddles the truth to provoke violence & chaos. The director adds enough shades of grey to the character of Virumaandi which separates him from the conventional tee-totaller hero of Indian cinema. Virumandi is hot-tempered, a drunk and an easily manipulated guy. The naivety of the protagonist plays the central role in the murders. His spontaneous reaction (riddled with crude words) to the death of beloved grandmother perfectly exhibits his nature – a mix of recklessness and love. 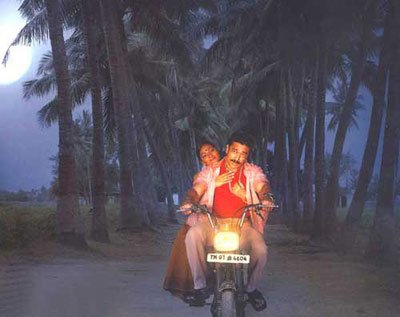 Three vital subtexts are imbued throughout the narrative – caste-based violence, fight for resourceful land and a message against capital punishment. The first two subtexts continue to create resonating effect on the viewers as the spontaneous, mob violences in rural South Tamil Nadu are either created by one of these two. The tensions between two intermediate castes are pretty much evident in the film’s earlier ‘Jallikattu’ (bull-fighting) scene. The caste pride of Kothaala seeps through his demeanor in each of the sequence. But, caste for him is a means to get by; an identity that allows him to divide and conquer. His real thirst is for the land resource, which morphs into a craving that allows him to some unimaginably despicable things. The villainy of Kothaala Thevan is taken to new extremes (one that is not often seen among the villains of Tamil/Indian cinema) as his tactics are shown to produce easy victories. The other chief antagonist Peikamaan shows how the apex of caste-power structure works. He is a policeman working in the village of Nallamma Naicker, but faithful to Kothaala (based on his affinity for being a Thevar). The law & judiciary officials work in tandem (belonging to the same caste) to produce favorable judgments.

One of the glaring flaws of “Virumaandi” is the way it proffers its argument against capital punishment. The story of Virumandi is given more running time to explain how capital punishment (the extended flashbacks) are conjured through abuse of power, but the elaborate set pieces of prison riots afflicts the message and rather gives us violently entertaining stunts. As Virumandi & Angela towards the end credits talks on a TV show about the inefficiency of death penalty, the words seem unintentionally ironic. Because, only few minutes before as Virumandi blasts through robust jail doors, we hear the song that calls for a god to wreak vengeance on evildoers. On one hand, ending condones a vengeful killing (the gory death of Kothaala) and then goes on to sway a message of nonviolence. Of course, the prison fight sequences are entertaining if you view this film as a mere mainstream cinema, but considering the rich subtexts Kamal Haasan has induced in the narrative, the ending seems unsatisfactory. 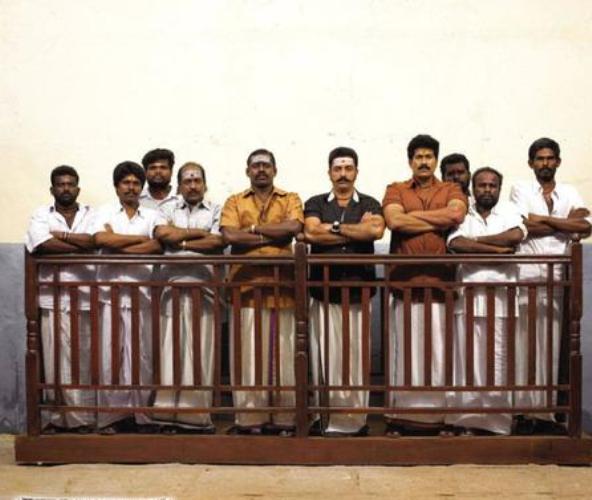 “Virumaandi” is one of the rare Tamil movies to portray violence with all its ugliness. Limbs are chopped up, heads roll, blood flows and women are brutally beaten. Conventional Tamil films based on the caste clashes in rural Tamil Nadu deliberately or unintentionally depict violence as a means to an end, but here violence is the end. The fights aren’t just clashes between good and bad. Innocent bystanders like women and children are sacrificed. Only few movies that followed “Virumaandi”, based on the same theme & setting (like “Paruthi Veeran”, Subramaniapuram”) stayed away from celebrating violence, but a large chunk of Tamil movies still continue to laud the hero’s penchant for violence. 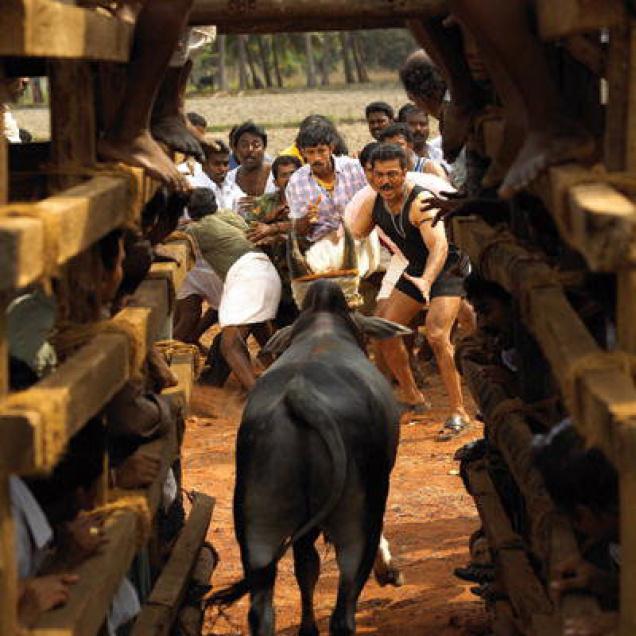 Kamal Haasan’s subtle directorial touches and his attention to detail bestow an enhanced movie experience. The movie has one of the most authentic portrayals of ‘Jallikattu (the sport has been banned by Supreme court for the last few years). The entire ‘Jallikattu’ scene perfectly evokes the rural setting, although it was really filmed in a Chennai studio (the bulls were transported to the studio). The prolonged period of the murder trial is astoundingly depicted through Virumandi’s detached stature and his beard. The characterization of Angela subverts from the usual manner journalists or social activists are shown. Inspector Peikkaaman’s desire to know her caste by asking her native place and her reference to ‘Kilvenmani’ is one such example of Kamal’s nuances. In another nuanced touch, we see the village priest, perjuring in court about the marriage happened between Virumaandi and Annalakshmi, casually hides the ring they have given him on the occasion. Apart from few CGI skirmishes, the technical team laid the benchmark for Tamil Cinema (it is the first Tamil film to attempt live-recording, which had its pros and cons). The performances are of the highest quality in Indian cinema and as I said earlier, praising the acting talents involved through simple words would only be a folly.

Kamal Haasan’s “Virumaandi” (175 minutes) is one of the best & rare mainstream Tamil/Indian movie that doesn’t treat audiences as mere entertainment-seekers. For the most part, it perfectly amalgamates the base Indian cinema elements with thought-provoking subtexts.